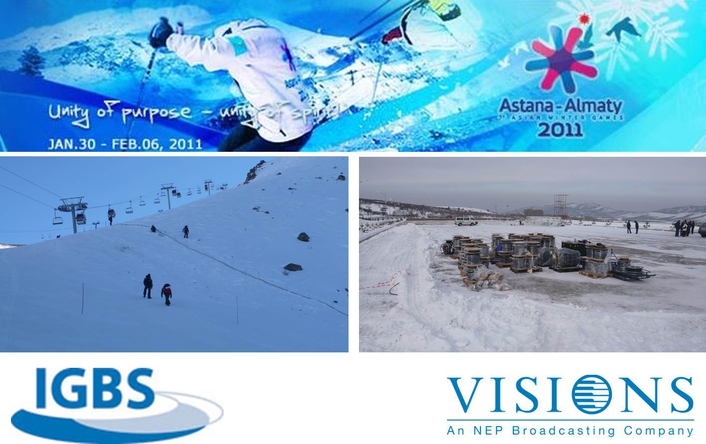 NEP Visions will provide individually designed flypack OB systems for each of the six venues in Almaty
International Games Broadcast Services (IGBS), the host broadcaster of the 7th Asian Winter Games, has appointed NEP Visions to supply a broad range of outside broadcast equipment and technical crew for the event, to be held in Almaty and Astana, Kazakhstan from 30 January – 6 February 2011.

NEP Visions will provide individually designed flypack OB systems for each of the six venues in Almaty, which will host events including alpine skiing, the biathlon, cross country skiing, ski jump and ice hockey. Housed either in existing buildings or purpose-built temporary accommodation, the extensive equipment tally includes over 100 camera channels with a mixture of Sony and Philips HD cameras, 56 large lenses and 28 EVS servers. All feeds will route back to the IGBS Media Centre in Astana, which will then provide host broadcast services to broadcasters worldwide.

The NEP Visions team will also be laying in excess of 75km of fibre and Triax camera cable, in order to cover the ski event routes with multiple cameras.

Dougie Fletcher, Flypack and Contract Manager, Visions, said, “We’ll be laying a staggering 70km for the alpine skiing and the cross country events alone. Considering the terrain, the expected temperatures of -20˚C and the lengths involved, this will be a remarkable feat of engineering.”

A total of 85 technical crew from NEP Visions will be travelling to Almaty from early January to set up and support the OB equipment throughout the Games. The equipment will also be used to cover the closing ceremony from the ice hockey arena.

Visions’ flypacks have been used at many prestigious events including the 2006 Asian Games in Doha, the 2008 Olympics in Beijing (opening ceremony, athletics and gymnastics) and the Wimbledon Lawn Tennis Championships.

IGBS, formerly DAGBS (Doha Asian Games Broadcast Services), is a unique joint venture between HBS and IMG Media which was set up in September 2004 with the mission of being the Host Broadcaster of the 15th Asian Games Doha 2006. It has since provided production teams for the 16th Asian Games Guangzhou 2010 and is currently acting as Host Broadcaster of the 7th Asian Winter Games Astana-Almaty 2011.The combined skills and experience of the two parent companies make IGBS a genuine and unique “turn-key” Host Broadcaster, drawing experienced personnel and expertise from the top levels of the television industry.

Visions is one of the largest independent Outside Broadcast facilities company in the UK and is amongst the largest in Europe. It has 25 years of experience delivering first class facilities and service for television production across the world. Its facilities include a fleet of 20 trucks plus edit facilities, OB fly-pack facilities, production offices and studio facilities. Visions is a pioneer in HD OB production facilities, working on its first HD production in 2003 and continuing to be at the forefront of the development of this standard in OB facilities. Visions’ credits includes THE premier events in the world of broadcasting including three Olympic Games, football and rugby World Cups, Asian Games, Premier League and Champions League Football and a host of music, light entertainment and corporate events, all over the world. Visions is an NEP Broadcasting Company.