Virtual Reality for Sports – The Next Big Thing?

Back in January we noted the emergence of Virtual Reality (VR) as a serious alternative to the traditional and digital broadcast model for consuming sports. We concluded that this was an area that should be closely monitored, even though we thought it might be a few years before the technology presented itself as a viable alternative. While we were right concerning the first point, VR in sports might become a reality sooner than anticipated.

Virtual Reality for Sports
In sports media we often describe our industry’s evolution in terms of major paradigm shifts. These shifts tend to be driven by new methods to consume content. These innovative methods breed new user habits, which in turn lead to numerous market opportunities. For example:

Radio – This was quite possibly the dawn of the sports media industry. For the first time ever, live sports could be enjoyed away from the actual venue.
Television – The consumer could enjoy live video of the event from the comfort of their living room.
VCR – Viewers were now provided with the option to record broadcasts and watch whenever they wanted.
Internet – Users are now able to instantly access sports content and connect with leagues, teams and players like never before.
Online video – Television is now extended to the online space, thus providing users with the opportunity to stream online video to computers.
Mobile devices – The Internet and online video are combined into a portable device that provides an even more interactive, engaging experience.

Despite the benefits, every paradigm shift presents some sort of disruption. The disruption is rarely immediate and revolutionary, but rather, a gradual evolution. Often, the initial reaction to new technology by the established players is often dismissive and complacent. History is full of these examples:

“The radio craze will die out in time.” – Thomas Edison, American Inventor, 1922.
“Television won’t be able to hold on to any market it captures after the first six months. People will soon get tired of staring at a plywood box every night.” – Darryl Zanuck, 20th Century Fox, 1946.
“There is no reason anyone would want a computer in their home.” – Ken Olson, president, chairman and founder of Digital Equipment Corp., 1977.
“I predict the Internet will soon go spectacularly supernova and in 1996 catastrophically collapse.” – Robert Metcalfe, co-inventor of the Ethernet, founder of 3Com, 1995.
“There’s no chance that the iPhone is going to get any significant market share.” – Steve Ballmer, USA Today, 2007.

So, within this context, the big question on our mind is whether VR will join the list of technologies above and bring a paradigm shift to the sports media business. Is it the “Next Big Thing”?

For many of us who have tried it, the answer is definitely ‘YES.’ The ability to put on a VR headset, connect it to your smartphone or computer, and completely immerse yourself (as if you were there) in an event thousands of mile away is incredible.

Imagine a Man United fan in Australia who has never experienced the atmosphere at Old Trafford and most likely, never will. With VR technology, they will be able to buy a virtual ticket and experience the match as if they were there.

The possibilities are endless. They could pick a seat behind the Man United dugout or at the Stretford End. What about standing with the teams in the tunnel as they wait for the referee to lead them onto the pitch? What about sitting with the team in the dressing room after the match? The options would only be limited by where you can place a camera.

As a Man United fan living on the West Coast of the US, it is hard not to get excited. So let’s assume for argument’s sake that my excitement is not simply a fad and that this really is the “Next Big Thing” – another paradigm shift. That leads us to a number of very interesting questions as to what the impact could be on the sports industry. 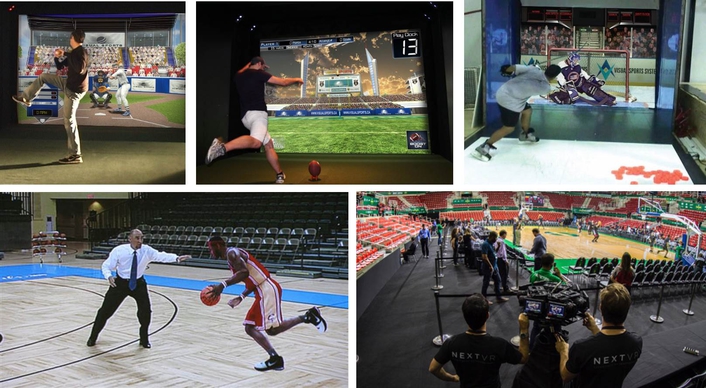 There are also a number of questions related to the business model. Is it part of your cable subscription or is it sold as a standalone direct-to-consumer pay-per-view or subscription model? Are the rights sold on a territory-by-territory or on a worldwide basis? Do you sell league-wide rights as is done with broadcast rights (i.e. the Premier League) or do you sell it on a team basis as is done with tickets (i.e. Man United)?

These are all very important, yet complex questions.

Business Case
In the end, it will probably come down to numbers and revenue maximization. So let’s do a little exercise. We’ll use the Premier League and the NFL as an example (top leagues in terms of rights revenue in Europe and North America):

Let’s assume that VR tickets sell for 25% of the average value of a ticket (so $17.09 for BPL and $21.11 for NFL). So how many multiples of the average attendance would the BPL and NFL have to sell to match their current, very lucrative TV rights fees?

13-19X sounds a lot, but let’s put this into perspective. During the regular season, a nationally telecast NFL game averages at 17.6 million and the Super Bowl regularly achieves over 100 million. For the Premier League, the average was 12.6m in 2011. So, clearly an average of 900,000 and 700,000 per game is not unreasonable and quite achievable.

All these figures were quickly researched and may contain mistakes. Also the assumptions can be debated and challenged. The whole purpose of these calculations is to illustrate the potential of the technology. It is eye-opening, isn’t it?

Piracy
What impact will the technology have on piracy?
With consumer VR cameras like Bubl and do-it-yourself streaming services like Periscope, there will always be the risk that spectators can bring their own cameras and stream unauthorized VR-enabled videos online. The slower the adoption, the more likely piracy is to take place.

This happened in the music and movie industries, and is a regular occurrence in live sports broadcast. In the past, the best weapon against piracy has been to create better, legal alternatives.

Barriers to entry
What barriers currently exist that prevent this technology from immediately being adopted?
From a pure technology perspective, the barriers are very limited. Most, if not all, of the technology already exists. There are a number of cameras available to either capture 360 or spherical video in high resolution (full HD and above) and 3D.

There are a number of VR headsets available on the market at very reasonable prices and most of them connect to your smartphone, computer or game console. As the experience can be delivered over the internet, VR instantly has access to billions of internet enabled devices.

The only major barrier is related to rights. Before this issue is addressed, the technology will not go mainstream in sports. We might see piracy versions, but the experience will not be what it can be. The BPL with its shorter rights-cycle is less constrained than the NFL who has deals until 2022.

Industry impact
The final question relates to what the impact will be on the industry.

From a consumer perspective, the technology will provide yet another choice rather than replace existing choices. It is important to note that the disruption can have significant impact, but rarely makes older technologies obsolete. Television didn’t make the radio obsolete; online video hasn’t made the television obsolete; and mobile devices haven’t made the desktop obsolete.

For broadcasters, the impact is really dependent on the answer to the first question. Will VR be part of their broadcast model, in which case they will have to incorporate the technology into their offering, or will it be a new category? In case of the latter, then the main impact will probably be on the fees paid for broadcast rights. There is, of course, also the possibility that someone may create a hybrid model.

For rights-owners, the impact is probably the greatest. Whether it becomes part of existing rights structure or whether this is a new category, there is clearly a financial benefit. The more interesting question is…Will this be the technology that completes the trend initially started with the Internet, whereby rights-owners go directly to consumers without the middleman?

Finally, for a company like deltatre, it means we need to do what we have always done: adapt and innovate. VR will most likely require similar services we currently provide, but in a different form. This means we need to adapt our platforms to take this new technology into account.