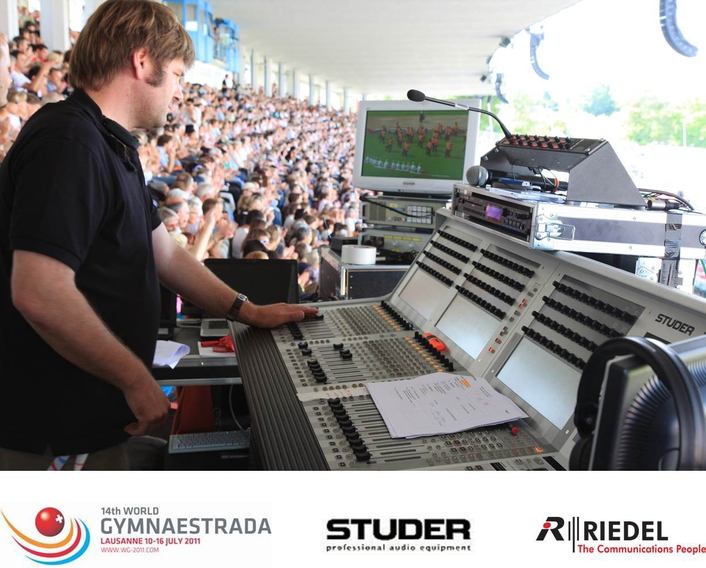 RockNet transported the audio signals via three RockNet MADI interfaces to the OB truck of the Swiss broadcasting network TRS
The organizer of this year's Gymnaestrada in Lausanne installed a comprehensive audio and communications infrastructure. The system consisted of a RockNet digital audio network and communications infrastructure comprising Artist digital matrix intercom and TETRA digital trunked radio from Riedel Communications.

The 14th Gymnaestrada, which took place between July 10th and July 16th, is one of the largest international amateur sports events with nearly 22,000 participants from 55 countries. For the opening and closing ceremonies as well as during the regular events, the organizers used a large RockNet installation for distributing the audio within the stadium. A total of three RockNet rings transported 180 audio signals between four different stages and the FOH in the Stade Olympique de la Pontaise arena. The Swiss event specialist Skynight from Geneva was responsible for planning and installation. All three RockNet rings were connected to a digital Studer Vista 5 mixing console. This was the first time a single Studer console was used to control three RockNet rings together.

"The RockNet installation allowed for maximum flexibility. We were able to easily remove stages and interfaces from the ring that weren't needed after the opening ceremony without interferences to the underlying RockNet infrastructure that was still used for the rest of the Gymnaestrada. To realize pre-mixes and pre-listen monitoring for the musicians on stage, we used additional digital Yamaha mixing desks that were also equipped with RockNet expansion cards. With the help of these interfaces cards we were able to control all channels of the RockNet network from all consoles. Furthermore, RockNet's "Independent Gain" allowed for individual sub mixes independent from the main mix", said Martin Reich, responsible for the planning on the behalf of Skynight.

In addition, RockNet also transported the audio signals via three RockNet MADI interfaces to the OB truck of the Swiss broadcasting network TSR. 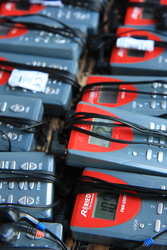 To establish a communications infrastructure for the whole Lausanne area, the organizer installed a comprehensive digital trunked radio network (TETRA) with two separate TETRA cells. The network provided 21 digital radio channels that were used by the local police as well as the organizers. Besides its clear digital audio quality TETRA is also protected against eavesdropping – a big advantages for large scale events such as the Gymnaestrada.

For the opening and closing ceremony the organizers used an additional Artist digital matrix intercom system that was integrated with the radio network via ISDN and VoIP interfaces. A total of two Artist 64 and 25 Artist control panels were used at the event. The integration with the TETRA network allowed for calling selected radios directly from the Artist control panels and vice versa. The connection between the two mainframes was realized via dark fiber.