Vendée Globe: Setting Sail on the Everest of the Seas

.
Les Sables d'Olonne, Saturday 10th November 2012, 13:02 - 20 skippers cast off on the biggest solitaire round-the-world boat race: the Vendée Globe. AMP VISUAL TV was on deck to cover this worldwide event. Van 11 and an impressive HF operation would guarantee the international signal, relayed live across 18 channels, 7 of them broadcasting internationally.

Being in the right place…
To capture a boat race in photograph is always a challenge.  To ensure visibility of the biggest round-the-world race is an even harder one to attempt.   The key challenges are to give meaning and to ensure as many people as possible see the action as it unfolds.

To achieve these goals, the producer can choose from 13 RF sources and 3 wired cameras, to offer a wide variety of viewing angles and make it easier for viewers to understand what’s going on.   From the piers, the Vendée Globe Village, at the exit of the channel or on the open seas, not one of the strategic positions was overlooked at the race start thanks to a technical system adapted and optimised by the expertise of the RF department.  3 helicopters - one of them equipped with a Cineflex stabilising optical block - and a relay plane at an altitude of 3,500m secured the transmission link between the RF sources and the RF van, positioned close to OB truck 11 at the port authority offices of Sables d'Olonne.

... At the right time
Before the start of the race, each of the contestants leaves the pier at Port Olonna one by one, every 3 minutes.  These moments of intense emotion are mixed with excitement and trepidation during which hundreds of anonymous faces escort the skippers’ friends and families.   2 RF cameras and a private TF1 camera followed the action.  The procession up the channel was picked up by 2 heavy cameras positioned at the mouth of the river and another camera placed on an apartment balcony that gave a commanding overall view.   A Beauty camera was also installed on the roof of OB truck 11.

At the start of the race, 2 launches equipped with RF cameras enabled us to get a closer look at most of the monohulls.  The launch from where François Cluzet declared the start of the race was also followed by an RF camera.  3 helicopters, one of them equipped with a Cineflex gyro-stabilised aerial, provided beautiful overhead images. And finally, for some ultra-realistic shots, 5 of the boats were equipped with on-board cameras, transmitting in RF for the duration of the race start.  These 5 competitor boats each had an airtight chest containing an RF transmitter and GPS signal making it possible to track them.  Race protocol required each of the skippers involved to throw the chest overboard into the sea once live coverage of the race start was over.

The whole RF operation was relayed by pressurised aircraft establishing the link with the RF van, positioned near OB truck11.

Internet users were also able to watch the race start live in streaming on DailyMotion thanks to the teams from StreamFactory. The web signal was enhanced with videos from a second transmission created directly in OB truck 11.

An historical operation
AMP VISUAL TV’s past is closely linked with the Vendée Globe. It was the Vendée Globe that actually kick-started AMP’s live broadcasting activities with the building of the company’s first ever OB van operator in 1992.  After 20 years and some thirty mobile units later, the event, just like the local enterprise itself, has now expanded internationally in both scale and scope.

The Everest of the Seas
The Vendée Globe is reputedly one of the world’s most difficult races.  The goal is to sail around the world solo without stopping and without assistance.  Founded in 1989, the race brings together the world’s best 60-foot monohull skippers every four years.  The event record-holder is Michel Desjoyeaux who completed the race in 84 days, 3 hours and 9 minutes (average speed 12.30 knots) during the 2008-2009 edition.

Now a global event, the start of the 2012 race has enjoyed record media coverage with an increase of 119% in audience ratings (source: KantarSport, independent organisation). 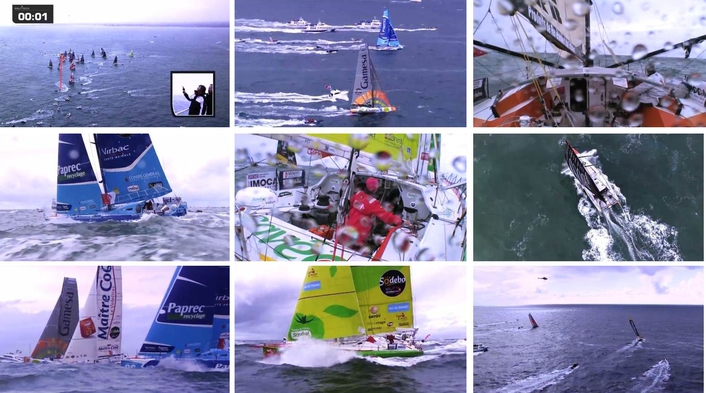