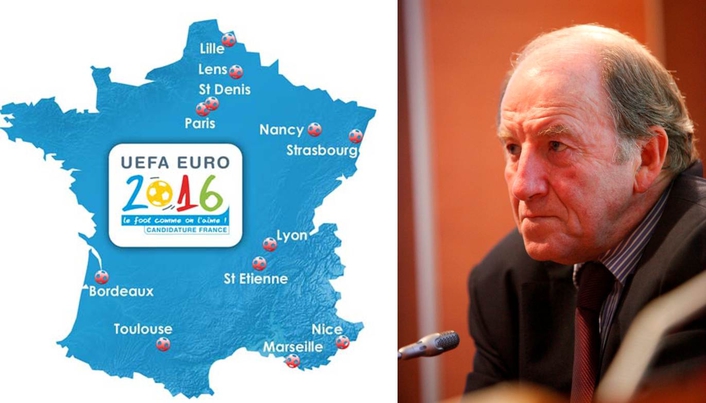 Steering group will be chaired by Jacques Lambert, former CEO of the organising committee for the 1998 World Cup in France
The organisational guidelines for the final round of the 2014–16 European Football Championship were presented this week at the first meeting of the UEFA EURO 2016 steering group, held at the headquarters of the French Football Federation (FFF) in Paris.

A steering group to deal with strategic matters

The eight-member steering group will be chaired by Jacques Lambert, former CEO of the organising committee for the 1998 World Cup in France and of the FFF. The other members will be the president of the FFF, the French sports minister, representing the government, a representative of the host cities (to be designated at a later stage, once the final selection of host cities has been made) and four UEFA representatives (two members of the UEFA Executive Committee, the general secretary and the deputy general secretary). Michel Platini, the UEFA President, will regularly take part in the meetings and work of the steering group.

An organising company to deal with operational aspects

UEFA, which holds all the competition rights, and the FFF, which, in particular, is responsible for the safety and security of the event, have set up a joint venture, EURO 2016 SAS, to which they have delegated responsibility for the operational organisation of the event.

EURO 2016 SAS is a company under French law, with the legal form of a simplified joint stock company, owned 95% by UEFA and 5% by the FFF. Its registered head office is in Paris. Its expenses will be financed entirely by UEFA.

UEFA and the FFF have designated Jacques Lambert as president of the company. A CEO will be appointed at a later stage to manage the company’s operations.

A new economic model to cover costs and risks

UEFA will manage all UEFA EURO 2016 revenue and cover all organisational expenses. It will assume all the economic risks of organising the event. This economic model replaces the traditional model whereby operational and financial responsibility for the organisation of the event is delegated to the host national association which, as a result, had to assume the risk of deficit.

During its first meeting, the steering group discussed the following points:

- general organisational structure;
- the mission of the steering group;
- the progress of stadium projects, in view of the appointment of the host cities, which the FFF has to propose to UEFA shortly.

In addition, the steering group agreed on the milestones in the general organizational countdown to UEFA EURO 2016:

The next meeting of the steering group will be on 8 September 2011.