See you in France in June 2016
The logo and visual identity for UEFA EURO 2016 were unveiled this morning at a ceremony at Espace Cambon Capucines in Paris, three years before the tournament, which will be contested by 24 teams at ten venues across France from 10 June to 10 July 2016.

The ceremony, which was attended by UEFA President Michel Platini, Noël Le Graët, president of the French Football Federation, and Jacques Lambert, president of EURO 2016 SAS, as well as numerous invited guests and dignitaries, featured a multimedia presentation that culminated in the unveiling of the UEFA EURO 2016 logo and visual identity. 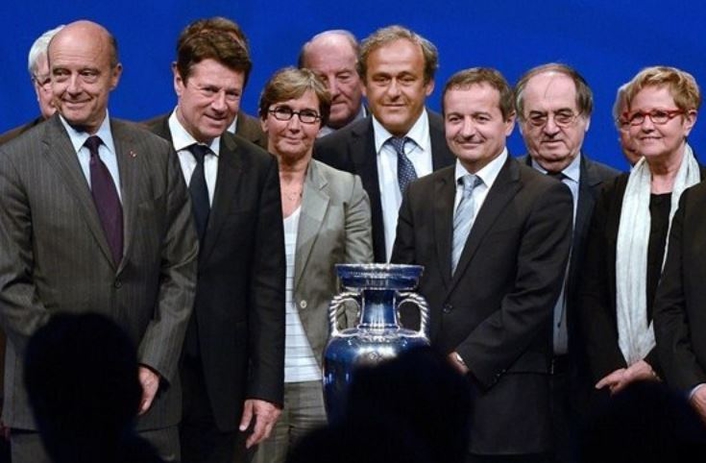 The idea of “celebrating the art of football”* was what inspired the creation of the logo. This notion expresses both the beauty of the game and the creativity of French culture, as well as encapsulating all of the qualities that make football such a unique and popular sport around the world: the unpredictability of matches, the beauty of a move, the passion of the players and the sheer intensity of it all.

UEFA EURO 2016 will be a historic occasion, as it will be the first time that 24 teams have competed for the coveted title of European champions. What is more, that tournament will take place against the unique backdrop of France.

Football fans will not want to miss out on events in France in 2016, where the festivities will be an opportunity to combine their shared passion for football and the party atmosphere with the discovery of all the cultural and artistic riches that the host country has to offer.

Before the logo was unveiled, the public were able to admire a giant replica of the Henri Delaunay Cup, which had pride of place on the Champ de Mars in Paris on Sunday 23 and Monday 24 June.