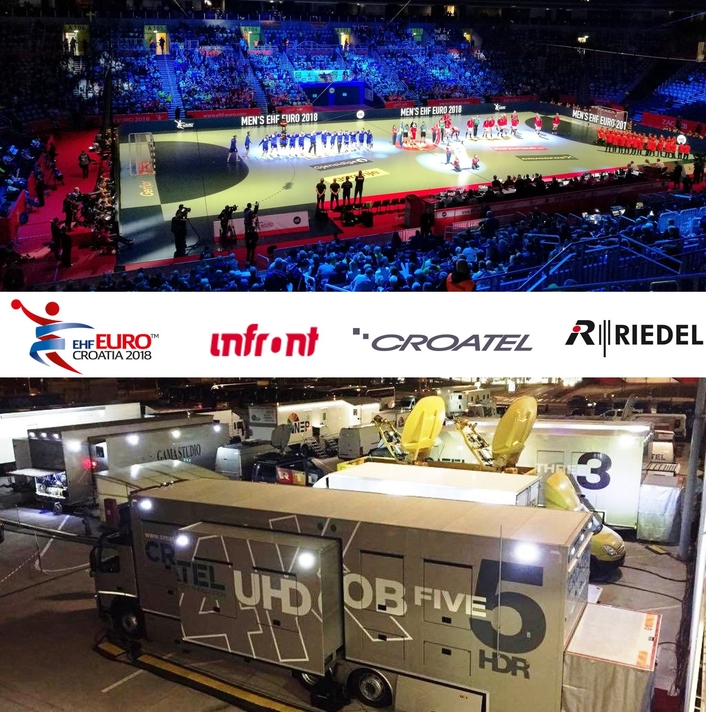 From 12 to 28 January, 16 national teams from all across Europe competed in Split, Poreč, Zagreb and Varaždin to finally be crowned European champion.

CROATEL was selected by Infront to carry out the host broadcasting of the Men's EHF EURO 2018 in Croatia. Croatel was responsible for the complete TV broadcasting of all 47 matches into 175 territories by at least 130 media outlets. In addition to the core handball markets in Europe, the event was broadcasted live throughout South, Central and North America, as well as to the UK, Georgia, Ukraine, Armenia, Azerbaijan, Moldova, Kazakhstan, Kyrgyzstan, Turkmenistan, Tajikistan and Uzbekistan. The cumulative TV audience was more than 1.6 billion viewers for the tournament.

The EHF EURO 2018 has been a resounding success, both on and off the court, with high attendances and record numbers not only for TV but also for online coverage. RTL, the Croatian broadcaster, reported a market share of 60 per cent during the home team’s matches.

Fantastic atmosphere, packed arenas, a top level of handball and passionate support from fans: The EHF EURO 2018 has been labelled a great success, with everything falling into place for a complete handball experience. 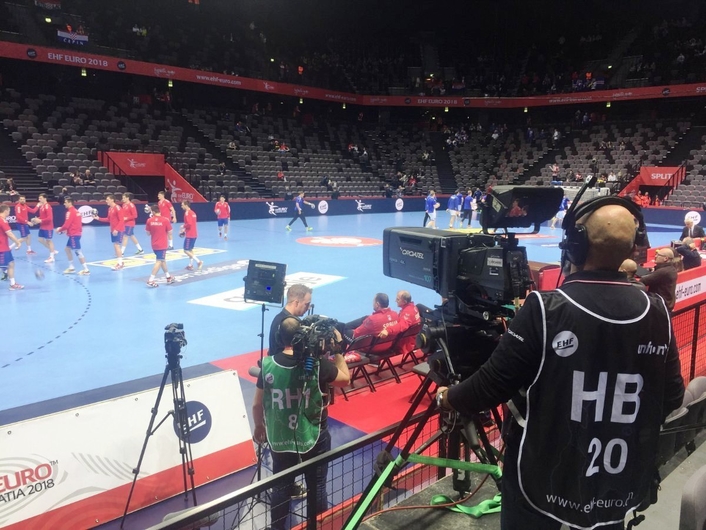 All matches will be available as live stream in territories without TV coverage on ehfTV.com, the EHF’s OTT platform 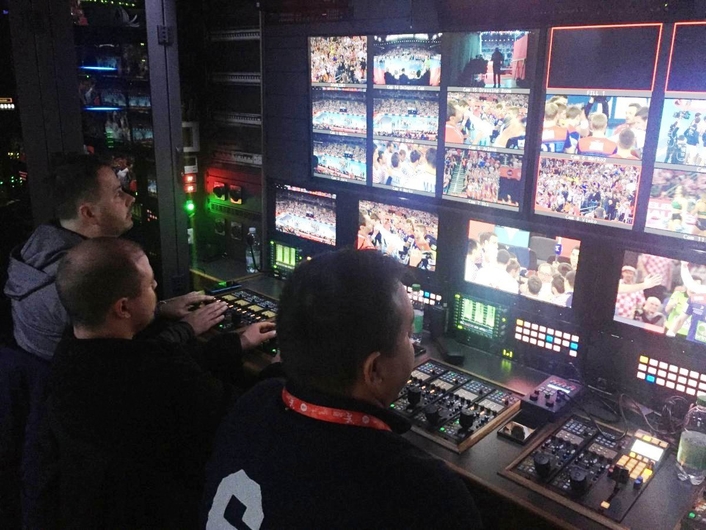 For the HD production all four OB Trucks of Croatel including the UHD capable OB5 were on duty to cover the 24 matches of the preliminary round of the in Split, Poreč, Zagreb and Varaždin with 12 cameras each. The 18 matches of the main round in Zagreb and Varaždin were then covered with 14 cameras each (one more super slomo camera and a spidercam was added) while the two semi-final matches and the final were covered with 18 cameras (two more super slomo cameras were added). 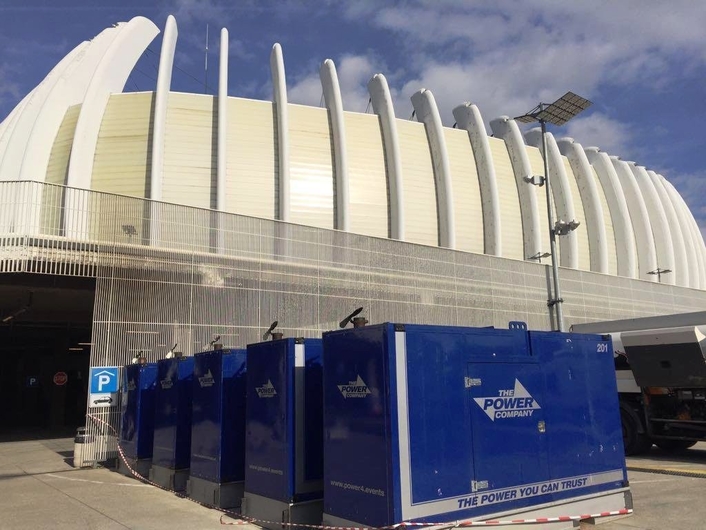 The Power Company guaranteed continous power for all the OB Vans

Croatel’s intercom equipment is standardised on Riedel. However, to scope with the demand of this international event and to serve the requirements of all broadcasters Croatel has rented 10x Riedel CCP-1116 commentator units and 4 Riedel ISDN Codecs for each venue. In addition, Croatel extended its own MediorNet with two additional frames and also included 6 Bolero beltpacks in the intercom infrastructure. 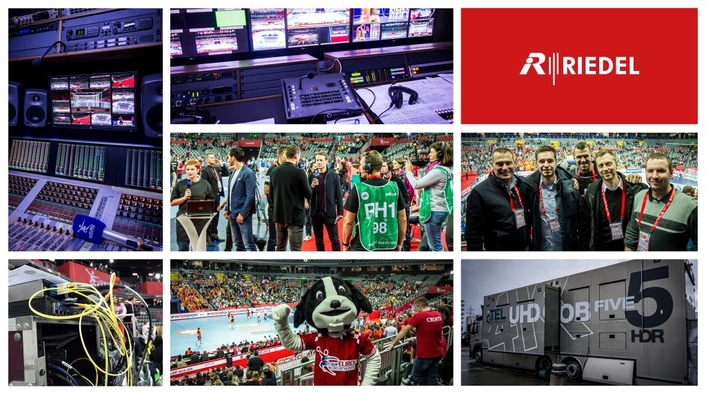 Croatel goes MediorNet for its UHD OB 5 truck at the European Men's Handball Championship in Croatia!

A New approach of the sponsors

Something new from a sponsor-perspective has been happening during the Men’s EHF EURO 2018 in Croatia: the new idea connected the Grundfos sponsorship to a very important global cause, directly supporting the United Nation’s Sustainable Development Goals (SDG) 6 and 13.

Each day of the EHF EURO 2018, there has been a special Grundfos Match of the Day. When the goal 6 and 13 were scored in these dedicated Grundfos matches, a donation has been made to two of four defined projects. Two of the projects support SDG6, and two projects SDG13. The four projects are carried out in close collaboration with the two NGOs: Practical Action and WaterAid. They are based in Timor Leste, Mali, Kenya, and Peru/Bolivia. 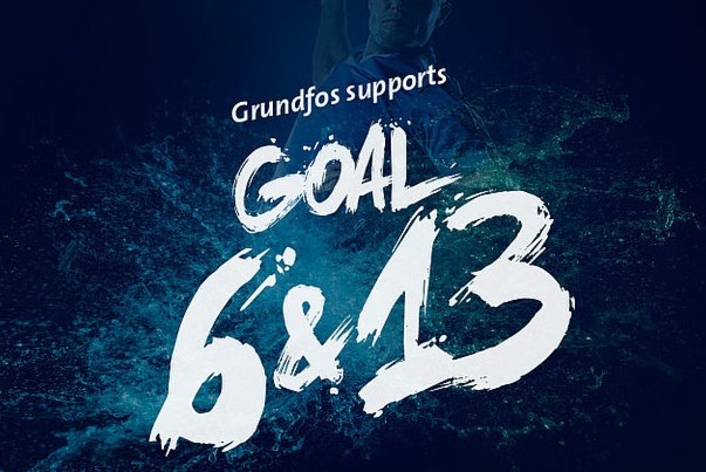 In Timor Leste and Mali, the emphasis is on water, while the projects in Kenya and Peru/Bolivia support the fight against climate change. During the Men’s EHF EURO 2018, around €25,000 have been donated to these projects.

Together with LIDL, official sponsor and fresh food partner of the EHF EURO 2018 the EHF presented the ‘EHF EURO Live Show’ which was broadcasted every day at 12:00 on Facebook and YouTube. The show featured exclusive guests, analyses of the matches played the night before, a preview of what was coming up the same night, in-depth features on the participating teams and its stars as well as a humorous approach to the championship.

Advertising partners also benefited from an optimised installation of 80 metres of LED boards, also behind the goals.

The fiesta kicked off minutes before the final whistle, as Spain claimed their first gold medal at the EHF EURO with a commanding 29:23 win over Sweden

The two finalists were a surprise, as neither were among the main contenders before the start of the EHF EURO. World champions France, Olympic champions Denmark, defending European champions Germany and Croatia as the hosts were the favourites for most of the experts before the tournament started – but this surprise final proves the great level of European handball. 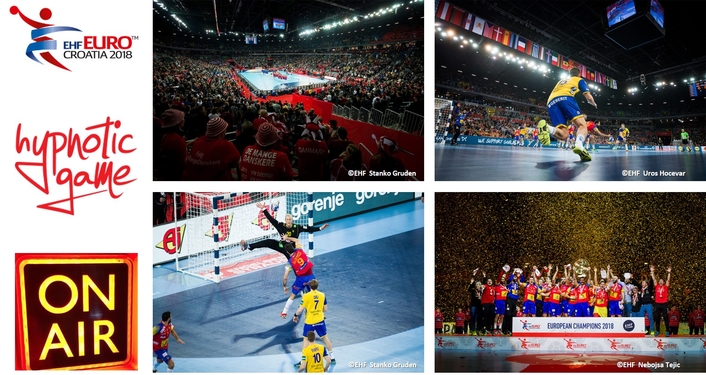 Spain claimed their first gold medal at the EHF EURO 2018 with a commanding 29:23 win over Sweden

With this win, Spain and Sweden also earned a place at the 2019 IHF World Championship in Denmark and Germany and qualified directly for the next EHF EURO in 2020, which takes place in Sweden, Austria and Norway.

The countdown to the next Men’s EHF EURO, which will feature 24 teams for the first time ever, has started with the final whistle in Zagreb. The event in 2020 will be the first Men’s EHF EURO organised in three countries – Sweden, Austria and Norway. The organisers have announced that the EHF EURO 2020 Final will be played in front of 24,000 fans in Tele2 Arena, a multi-purpose stadium with a retractable roof in Stockholm.