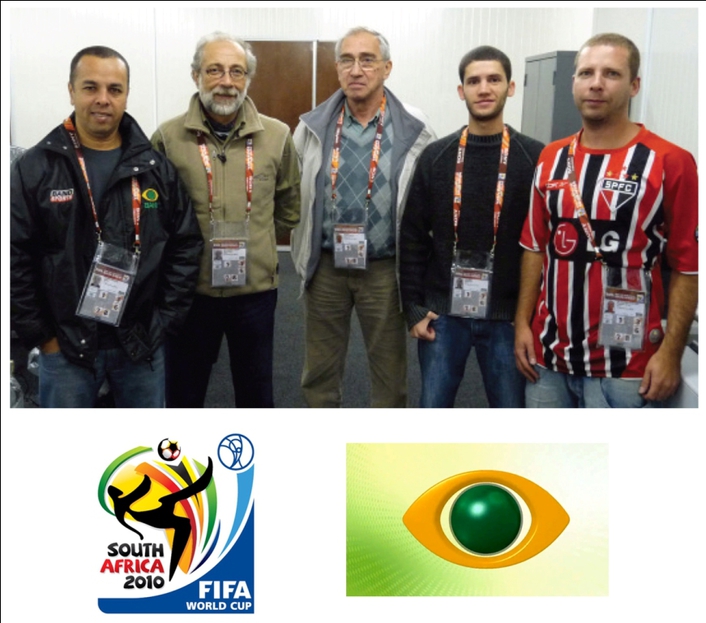 Jose Carlos da Silveira Junior (second left) and his band of Brothers
“We have a very good team, we have very experienced players but in a World Cup you have no margin for error,” says Jose Carlos da Silveira Junior, or ‘Juca’ as he is affectionately known, of the Brazilian national team’s chances at the FIFA World Cup™. The same can be said of the TV Bandeirantes team, given that they will be debuting eye-catching HD coverage of the event for Seleção fans.

“It will be the first time the World Cup has been broadcast to Brazil in HD, as we only went digital in 2007,” explained the Planning Director of the Bandeirantes Network, the second largest broad­caster in Brazil and a sub-licencee of TV Globo, the main rights holder in the country. In total TV Bandeirantes will air 56 games live, with the eight remaining matches – the games played simulta­neously at the end of the group stage – broadcast in full later that same day.

Juca, now at his fourth FIFA World Cup™, is a veteran of IBCs and media centres, so how is the Johannesburg version shaping up? “The IBC is very good, I went on the FIFA inspection (MRL Venue Tour) during March around the country to every city which will be hosting matches and they have done a very nice job at the stadiums, press areas, TV compounds... congratulations to all South Africans. The FIFA Max Server is also a very good upgrade and will benefit our work.”

As expected though the São Paulo-based broadcaster’s biggest concern is Brazil, and they will have three ENG crews purely following Dunga and his squad. “Apart from the games we will air lots of Brazilian stories and pieces about other participants. Our biggest challenge will be to bring to Brazilian viewers the same flavour and ambience we are feeling here.” And will they be broadcasting a sixth Brazilian triumph in impressive HD? “We are confident Brazil will reach the Final, but we are here until the end – with or without Brazil. The main expectation is that we play well in the style we like to see Brazilians play, attacking and making goals.”