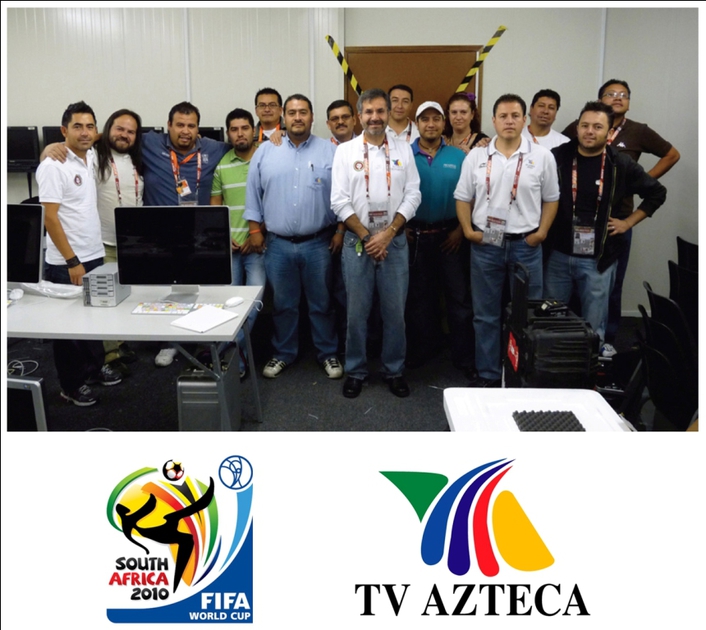 TV Azteca - Great Mexpectations
As one of the first Media Rights Licensees to arrive at the IBC, TV Azteca were clearly eager to get involved in the 2010 FIFA World Cup™. Picking up the keys to their unit on May 10 – a full 32 days before the tournament kicks off – the Mexican broadcasters have been able to quickly set up their facility and familiarise themselves with the IBC in plenty of time before the action begins.

But why get here so early? “We are not only broadcast­ing the matches, but we are also producing three other programmes – a two hour morning show, a two hour evening show and a three hour prime time show,” ex­plained Logistics Manager Mónica Skorlich. Expecting to transmit to an audience of between 15 to 18 million, they will be televising 30 first round games as well as an as yet undetermined number of games in the knockout stages all the way through to the Final. All 30 matches will be broadcast in HD as well as in SD.

The opening game always brings pressure, excitement and anticipation, but for TV Azteca there is the added fact that their compatriots feature in the curtain raiser – against hosts South Africa. “The starting game is always important but taking into consideration that Mexico are playing we have to be especially careful about every de­tail. The opening match is going to be particularly impor­tant to the Mexican public,” explained Pedro Carmona, Head of Engineering for Special Events.

Bringing 160 staff with them to South Africa, they will additionally have two SNG crews on the road. There will also be a few familiar faces dropping in. Among those you may see in the IBC over the coming months are Emilio Butragueño, Jared Borgetti, and Hernán Crespo, who will all be providing insight for TV Azteca during the tournament. And what about Mexico’s progress? “We have expectations of making it to the second round,” Pedro added. “Our audience is quite sure, though, that we are going to play the fifth game, you never know...”

MCR Is The Star

As well as being the nerve centre of broadcast operations at the 2010 FIFA World CupTM, the Master Control Room (MCR) is also taking a starring role in many MRLs transmissions from the IBC. 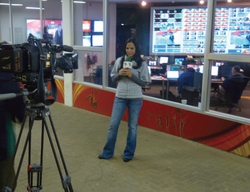 While its key function is to ensure the smooth monitoring and re­distribution to MRLs of incoming feeds, as well as handling the management of signal distribution to the HBS Production Centre, its ‘goldfish bowl’ position on the IBC’s central courtyard has made it an attractive backdrop for stand-up reports. “It is so big and professional and looks really nice,” explained TV Azteca presenter Aline Arnot. “It gives a good background for people back home in Mexico to see what the IBC here is like. Also it looks good to see all the MCR staff working hard in there.” The hub for all IBC video and audio signals, connecting the stadi­ums to broadcasters both at the IBC and around the world, it is appropriately positioned in a central location - but that was all part of the plan when designing the facility.

“With nearly 400 displays on the huge MCR monitor wall, eight 40-inch CATV sets and two giant 103-inch high definition plasma displays each weighing 250kg, the MCR makes an impressive back drop for a piece to camera,” explained Operations Manager Ni­gel Wilson. “The engineers even promise to behave when in shot. Please don’t tap on the glass or attempt to feed them, though, the results can be unpredictable!”