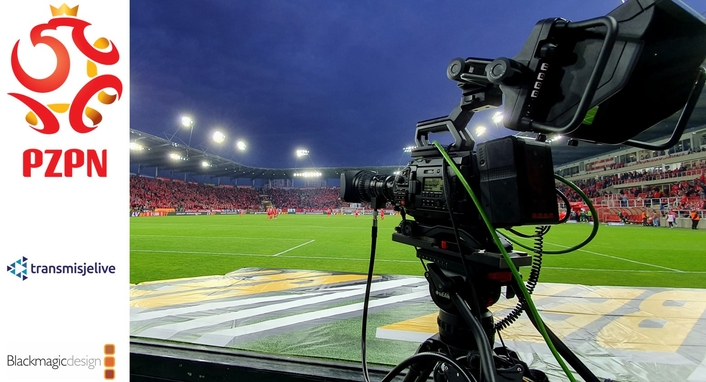 Live production specialist, transmisjelive, produces all content for PZPN’s YouTube channel, Łączy nas piłka (The Ball Connects Us), including action from Poland’s national, women’s and youth teams as well as matches from Poland’s second league. “Our cameras give fans exclusive access to information and insights that traditional broadcasters cannot deliver, and the huge subscriber numbers on YouTube reflect that,” explains Artur Kuszel, producer at transmisjelive.

For each event, transmisjelive deploys its Ultra HD OB system, which is built around an end to end Blackmagic Design workflow, including signal management through a Smart Videohub. Six URSA Broadcast camera signals are routed to an ATEM 2 M/E Production Studio 4K switcher, where the team overlays graphics and adds slow motion replays into the program mix.

“PZPN’s content schedule is designed to showcase excellence at all levels of football, from league matches that help build communities at a club level, through to international fixtures with the national squad,” explains Artur.

To demonstrate PZPN’s continued commitment to improving access to all levels of football in Poland it was important that transmisjelive implemented a broadcast capable solution that was also capable of handling live streaming, according to Artur.

“The URSA Broadcast works perfectly for this scenario; as a system, it is adaptable and means we can set up a professional multicamera production, even if the stadiums themselves lack the necessary infrastructure and connectivity to support it. That is all thanks to the modular nature of the Blackmagic solution,” he said.

Another key focus of the channel is to promote future stars and so transmisjelive producers coverage of the Central Junior League, which features the U19 teams from Poland’s top flight Ekstraklasa and streams that to YouTube. “As well as providing full coverage of the games themselves, the setup also allows the youngsters to gain experience of being interviewed on camera from a much earlier age,” said Artur.

Content is streamed to YouTube via OBS onsite, however an additional layer of redundancy has been added with a second live PGM feed being sent back to transmisjelive’s remote production studio in Warsaw using a joint-SIM bonded LTE connection.

“We aim to provide PZPN with a stable livestream, regardless of weather conditions, internet connection strength or the location we’re working from,” concludes Artur. “The modular system we’ve implemented based on Blackmagic Design hardware has proven itself to be a robust and reliable setup, even in the most challenging of conditions, while the addition of our own independent streaming connection ensures uninterrupted coverage of matches.”