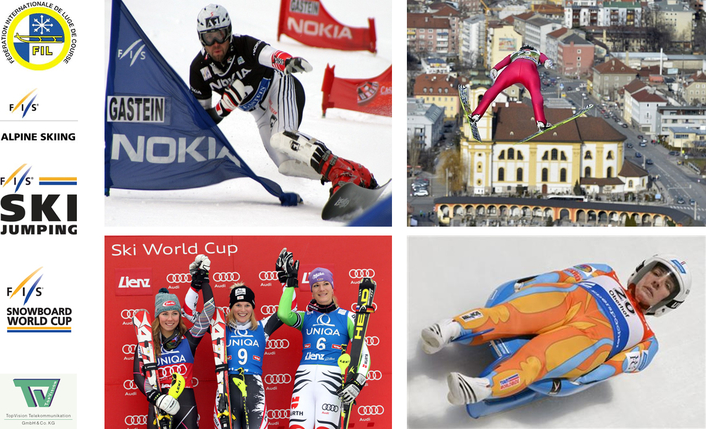 Already at the end of November TopVision’s latest addition to its OBVan fleet, the HD Ü2, started to cover the Luge World Cups in Innsbruck-Igls (23+24 Nov) and Winterberg (30 Nov+01 Dec). The 2013–14 Luge World Cup is a multi-race tournament. It started on 16 November 2013 in Lillehammer, Norway and ended on 26 January 2014 in Sigulda, Latvia.
From Winterberg HD Ü2 proceeded to Schruns/Tschaguns in the Montafon Mountains for the FIS Snowboard World Cup on 05 + 06 December. Also the 2013–14 FIS Snowboard World Cup is a multi-race tournament with three different competitions: parallel slalom, snowboard cross and the halfpipe.

HD Ü2 moved on to Titisee in the Black Forrest to cover the FIS Ski Jumping World Cup from 13 – 15 December. Here TopVision’s brand new Ikegami HiMotion II+ was integrated in the camera set-up. The Emmy Award-winning HiMotion II+ Ultra Slow Motion 3-chip camera delivered stunning images of the ski jumpers on their more than 100 meter ”fly” down to the ground. Due to the ground breaking performance also in extreme weather conditions the Ikegami HiMotion II+ was integrated in the 4-Hills tournament and the Ski Flying Event at Taublitz (Kulm).

After the Christmas break TopVision was on hand with the HiMotion II+ in Oberstdorf (27+ 28Dec) for the start of the 4-Hills tournament and then again the HiMotion was integrated in the HD Ü2 camera set-up for the New Year’s jumping event in Garmisch-Partenkirchen (31 Dec+01 Jan).

Meanwhile also HD Ü5 was ready for winter sport: In Lienz TopVision covered the FIS Alpine World Cups in Slalom and Giant Slalom from 27-29 December and then moved on to Innsbruck to cover the third stage of the 4-Hills tournament (again with the integration of the Ikegami HiMotion II+) while HD Ü2 was moving to Bischofshofen to cover the last stage of the 4-Hills tournament on 05+06 January. For the Ski Jumping events in Innsbruck, Bischofshofen and Taublitz TopVision has added another first: The Mini HighSpeed camera – it was mounted at the jumping table to see the ski jumpers immediately during the first seconds of their flight. 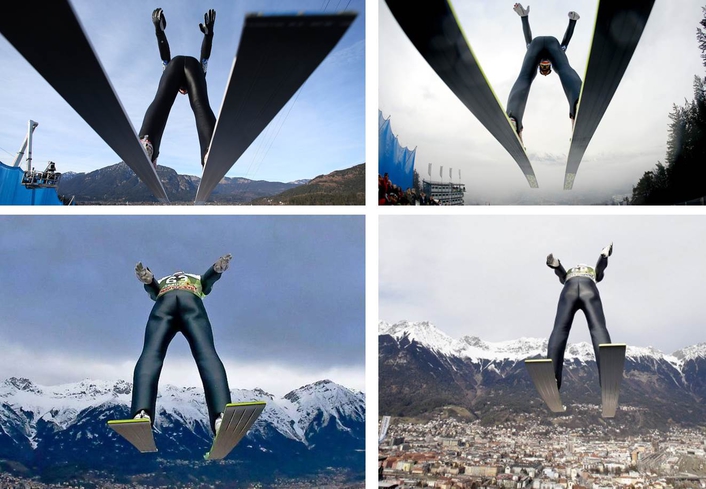 Images covered with the HiMotion Mini in Innsbruck

However there were more jobs waiting for TopVision in this particular week: The FIL Luge World Cup in Königssee was on the agenda and HD Ü4 took over for this event, because HD Ü2 was scheduled to cover FIS Ski Flying in Taublitz (Kulm) and HD Ü5 was on its way to Bad Gastein for the live transmission of two more FIS Snowboard competitions (09-12 Jan).

After Königssee HD Ü4 stayed with the Luge World Cup and followed the competiton to Oberhof (11-12 Jan) and to Altenberg (18+19 Jan) before it again was back for the start of the Bundesliga on Friday 24 January to cover the match Borussia Monchengladbach – Bayern Munich.

Also HD Ü5 needed to go back to Germany for the Bundesliga match Eintracht Frankfurt – Hertha Berlin (25Jan) before it again was on the road to Schladming to cover the FIS Alpine night slalom on 28 January.

And where was HD Ü2? It was on the way to Zurich to support the swiss company tpc for the production of “Voice of Switzerland (25+26 Jan) before the focus turned towards the Bundesliga for the coverage of the match VFB Stuttgart – Bayern Munich which is produced also in 3D together with TopVisions Ü1 3D on 29 January.

The Voice of Switzerland

On the weekend of 31 January – 02 February everything will be back to normal: All four HD OBVans will cover Bundesliga matches.

TopVision Telekommunikation GmbH is Germany’s leading TV production company and are a familiar sight at Germany’s largest sports event and are employed on a number of high-profile national and international assignments. Although sports coverage plays a major part of the company’s activities (Bundesliga, Champions League, Athletics, Tennis, Wintersports), the portfolio includes high profile concerts (New Years Concert, Salzburg Festival) and other shows and events (Live Earth, Scorpions, Wacken). With its Ü1 3D TopVision is able to produce 3D alongside HD simulcasts. And with its Ü2.1 TopVision has set the standard for HD production. Besides Sky Germany, the client list includes ARD, ZDF, Sportcast, Plazamedia, Swiss Television, Austrian Television ORF, DFB, Infront, Kentaro, and Music Delight Concert. Outside of its native Germany, TopVision operates in countries as far apart as Japan, the USA, Korea, Greece, Russia, Kazakhstan and the United Kingdom.