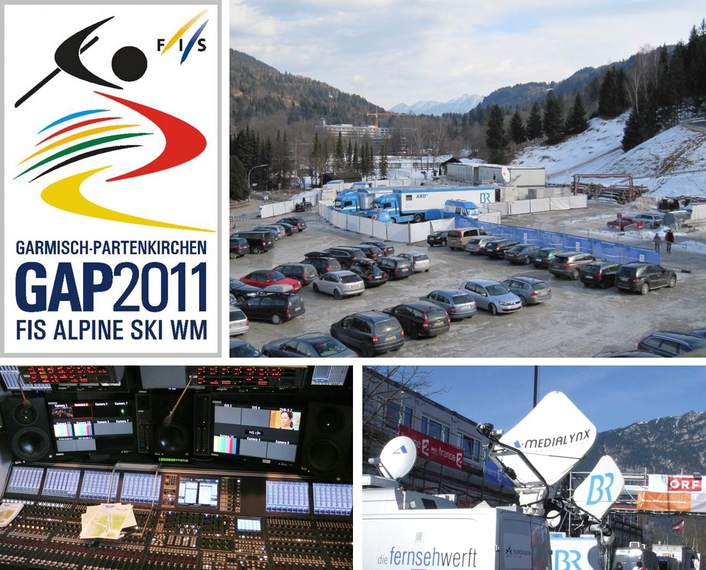 Lawo mc²66 consoles enhance the sound at the 2011 FIS Alpine World Ski Championships
The men’s slalom: second run, last round, and the tension is rising. The faintest creaking of the snow and the sound of carvers scraping over the ice are clearly audible: the international sound (IS) is being created by Lawo consoles.

In a joint effort, the nationwide German public broadcasters ARD and ZDF, under the banner GAP TV2011, acted as the host broadcaster for this year’s FIS Alpine World Ski Championship in Garmisch-Partenkirchen in Bavaria, Germany. Consequently, these two companies were responsible for the IS and video from February 7 – 20, 2011. The opening ceremonies, held at Gudiberg, were produced in 5.1 surround and distributed nationally and internationally in the same format. The actual races, as well as the award ceremonies, were produced and distributed in stereo.

A management team from ARD and ZDF started planning for the event as early as 2009. Preparations included the allocation of tasks, planning for camera requirements, and the selection of OB vehicles and mobile production units, according to the resultant concepts. With specific tasks on site and at the host broadcaster, a crucial phase of the project began about a year before the start of the competition. In cooperation with the local organisation committee, the broadcast infrastructure (including offices and a power supply) required by the host broadcaster and all other unilateral broadcasters was set up.

A fibre-optic network connected all three venues, TV compounds were defined and set up, and an International Broadcast Centre (IBC) in Garmisch-Partenkirchen was constructed using 120 office containers. Located at the Kandahar ski run, the IBC served as the interface for all outgoing and incoming signals, and provided offices for other unilateral broadcasters. Additional rooms were provided at Gudiberg and at the medal plaza.

Among other facilities on-site, SBA’s Ü1 HD was used for the international video, and ZDF’s MP4 for the ARD/ZDF national broadcast. Bavarian public broadcaster BR’s FÜ1HD was in operation at Gudiberg, at which location alone 24 km of cables were put to use. South West German public broadcaster Südwestrundfunk’s ÜHD2 was set up at the medal plaza.

Whether OB vans or container-based control rooms, all mobile production units used during this event were equipped with Lawo consoles (mainly mc²66s) for the creation and mixing of the event audio. “The computing power of the HD core is extremely important, as it allows a large number of DSP channels to be handled. It also enables us to record and edit multiple sources, such as interviews, even during the broadcast of a live event,” explains Jörg Teufel, technical manager at GAP TV, when asked about the main advantages of a Lawo console.

“mc² consoles also excel by offering a great overview and intuitive operation, even when a large number of channels are in use,” Teufel continues. A delay can be placed individually within a single channel strip.It is frequently inserted after fader and after aux, allowing the interview guest to hear himself correctly; at the same time, the audience still receives lip-sync audio. Ensuring that the picture always switches to the correct microphone, and that audio is added to the mix at the right time even during fast cutting sequences, the smooth configurability of the Lawo consoles’ Audio-follow-Video (AfV) function is another important advantage. “Only the combination of the AfV function with manual intervention allows us to create a perfect mix for the international audio,” explains Teufel in closing.

HD Production: FIS Alpine Ski World Championships 2011
OSRAM is Creating a Bridge of Light in the Colors of the Alpine World Ski Championships
Ski Jumping in 3D: A Comprehensive Test of Bayerischer Rundfunk