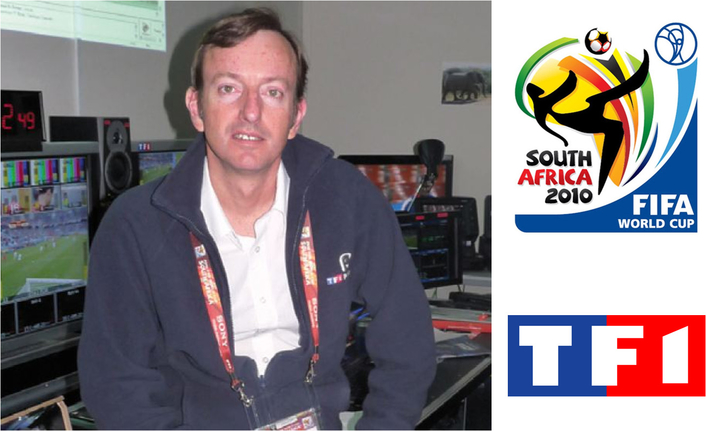 TF1’s Philippe Kauffmann, ready to take things further
The French national team’s troubles in this 2010 FIFA World Cup™ have had at least one positive repercussion for France’s TF1: they have fully validated its strategy of dividing its operations between the IBC, the team’s base camp and its headquarters in Paris. With much of the news coming from the base camp in Knysna (near Cape Town) rather than from the stadiums, TF1’s twelve ENG teams have had plenty of work, including covering every one of the team’s many press conferences live.

“We have our own philosophy about these things,” explains TF1 Head of Pro­duction Philippe Kauffmann, now working on his fifth consecutive FIFA World Cup™. “We view the IBC as a node, a place of transition, whether for our staff or our images. We learned a lot from our experiences as host broadcaster of the 2007 Rugby World Cup in France and of two Champions League finals.” The French MRL’s IBC premises are indeed smaller than one might expect from such a prominent broadcaster but as Philippe underlines, “our installations are not spectacular but they are very powerful.”

“We and HBS, we understand each other,” continues Philippe. ”We are maximis­ing our use of HBS’ resources to focus on the French team while also producing features about the competition as a whole, with a focus on popular teams such as Brazil, as well as local stories. We are in South Africa, it would be a shame not to cover it.” TF1 is broadcasting 27 matches of the 2010 FIFA World Cup™, sending ten HD feeds back to Paris, a further two in SD and one by satellite transmission. Its 125 staff members will produce approximately 150 hours of images while also sending out mobile, internet and 3D coverage. “We’re one of the only broadcasters to be using the 3D signal on actual television rather than in cinemas,” says Philippe, “though we are doing cinemas too. We see it as a building block for the future.” A future which is sure to include TF1, given that it already owns the rights to all 64 matches of the 2014 edition.

As Philippe points out, the national team’s three major tournament finals in eight years (at the 1998 and 2006 FIFA World Cups™ and at EURO 2000) provided TF1 with invaluable experience, but so too perhaps did the early exits in 2002 and 2008. Despite the team’s disarray, audience figures have been strong. “We got 15 million viewers for the opener against Uruguay and 17 million against Mexi­co,” says Philippe, “and we’re getting another ten million for our news shows. Last night we even got eight million at 22:30!” The present is bright, then, but what of the future? Asked about TF1’s plans in case of a France breakthrough to the knock-out phase of the competition, Philippe wistfully notes that “our system can take us a lot further.”