Team of Experts: Squash World Championship 2011 was Equipped with grandMA2

Tour Service Lichtdesign Teddy Goetz KG did the technical realisation
When the recent Squash World Championship took place in the Ahorn-Sportpark in Paderborn, Germany, not only were the elite of this famous sport present, but also some of the finest lighting technology products that money can buy.

All products were specified by lighting designer Michael Kantrowitsch. And for a good reason - he comments on his choice of an MA control solution: “I have been working with grandMA consoles a lot in the past and they have never let me down. For this show we used a grandMA2 light with the latest software release, 2.3.1.1. I love the new effects engine as it offers a very fast and comfortable way to create impressive looks and effects."

"The video is controlled via the console that is connected to the two MA VPUs. I’m responsible for the graphics and animations, while a colleague adds the current match scoring. The different content is stored on separate layers and can be selected by a simple fader-push. For this show we pre-visualised the whole set-up using grandMA 3D, which offered us the chance to test the lighting design beforehand. It was amazing to see how close the visualisation and reality actually were. grandMA 3D is absolutely great – and the best part is that it’s cost free!”

All products were specified by lighting designer Michael Kantrowitsch

Kantrowitsch designed the lighting for the players and their home country introductions and for a splendid show during the breaks, performed by the GOP Entertainment-Group's duo “Get the shoe”. They have won bronze medals at the world famous circus festival „Cirque de Demain“ in Paris, and also in China, during the „Wuqiao International Circus Festival“. 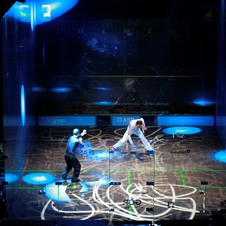 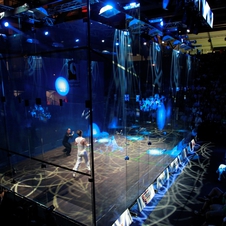 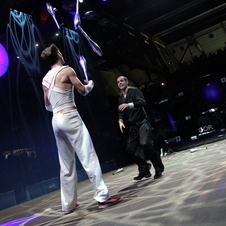 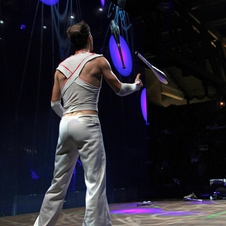 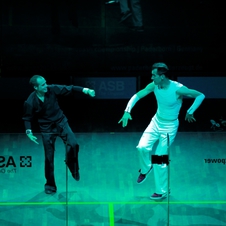 “It was our intention”, said Kantrowitsch, “to augment this world class sporting event with an enthralling show element appealing to all sports and squash fans, which also put them in the right mood for the games. The challenge was to create a connection between the audience and the court via the lighting. Another task was to play with the court’s glass walls as a projection surface and also with its transparency to see how it responded to the lighting. In the end, everything fitted very well.”