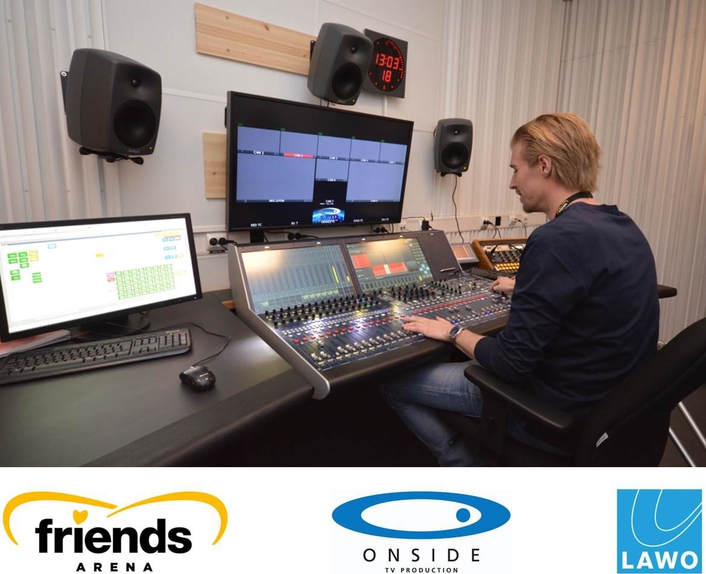 Thomas Lindeborg, Technical Coordinator of Onside TV Productions, behind the Lawo mc²56
Set near Lake Råstasjön to the north of Stockholm, the Friends Arena is the largest stadium and indoor venue in any of the Nordic countries. Home to the Swedish national football team and local club AIK, the venue holds up to 65,000 people for concerts and 55,000 for sports events.

Costing 1.9 billion Kronor (almost USD 285.8 million), the venue is jointly owned by Föreningen Svensk Elitfotboll (SEF, the Swedish Elite Football Association) and Svenska Fotbollförbundet (SvFF, the Swedish Football Association), and was opened in October 2012. Inside, it contains the most modern media production center in Sweden, with powerful Lawo digital mixing systems at the heart of its audio installations. Danmon Sverige, Lawo’s partner in Sweden, handled the system integration.

Operated by Onside TV Productions, a full-service production facility owned by SEF and SvFF, the facility is intended primarily to serve Swedish football events, but other productions can be handled from the venue itself and via its extensive telecom solutions. The production center is equipped to handle everything from web-based broadcast to DVD production. It also manages the advertisements and information presented inside and outside the stadium.

The Friends Arena production center occupies approximately 500m² and is located close to the players’ entrance and press area. Able to handle up to 30 cameras, it comprises three fully-equipped production rooms and two sound suites, along with two edit suites, a voiceover studio, vision control and a graphics facility. The sound suites are both equipped with full 5.1 monitoring, with a 16+16-fader Lawo mc²56 MKII console installed in Audio Control 1 and two 8+8-fader Lawo sapphire consoles in Audio Control 2. The facility also has a studio overlooking the stadium that has one of four moveable Lawo DALLIS stageboxes as part of a Lawo network, connecting all the consoles and stageboxes. According to Onside TV Productions’ Technical Manager Jan Arvidsson, the Lawo systems were chosen for their audio quality and flexibility. 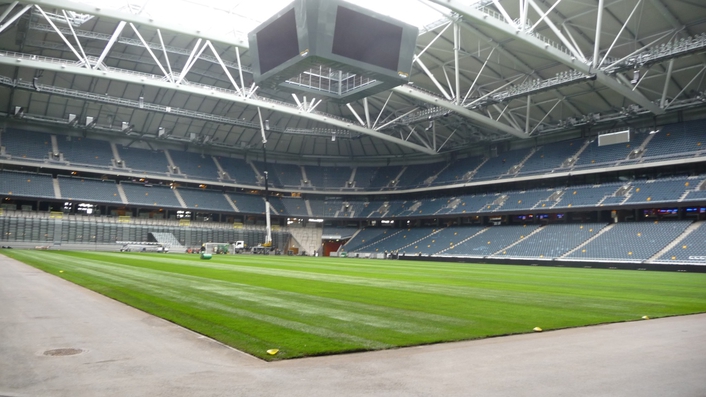 An overriding consideration – and one that played a significant part in the selection of the Lawo systems – was redundancy. The need to be able to provide 24/7 operation meant that both the control and DSP/routing systems had to be extremely reliable and offer failsafe facilities and power supplies. In addition, the whole facility has a huge uninterruptable power supply (UPS) that is able to keep all systems operational in the event of a power failure.

The mc²56 MkII offers 888 audio channels and 144 summing busses, and uses 40-bit floating-point processing. It offers up to 760 inputs and up to 64 subgroups, with 32 aux sends, up to 96 track busses and up to 48 main summing busses. The sapphire, meanwhile, supports 96 mono DSP input channels with 128 DSP modules (96 on input channels, 32 on summing busses). The DALLIS I/O system can accommodate a wide range of plug-in cards via a central master card, which is available with RAVENNA or MADI interfaces.

The Onside production center also serves as a MCR (Master Control Room) for all of Sweden’s football matches, both for live broadcast and recording. Sometimes this simply means accommodating an OB truck and transmitting its output, but it can require graphics to be inserted and an audio mix to be added before transmission – which can all be handled within the production center. Everything the center handles is also recorded for possible editing for use in weekly highlight programmes and for archiving.

The stadiums opening was marked with a show by famous film director Colin Nutley, entitled Svenska Ögonblick (Swedish Moments), which attracted a live audience of a crowd of 46,000 people and was watched live by 1,700,000 on TV.