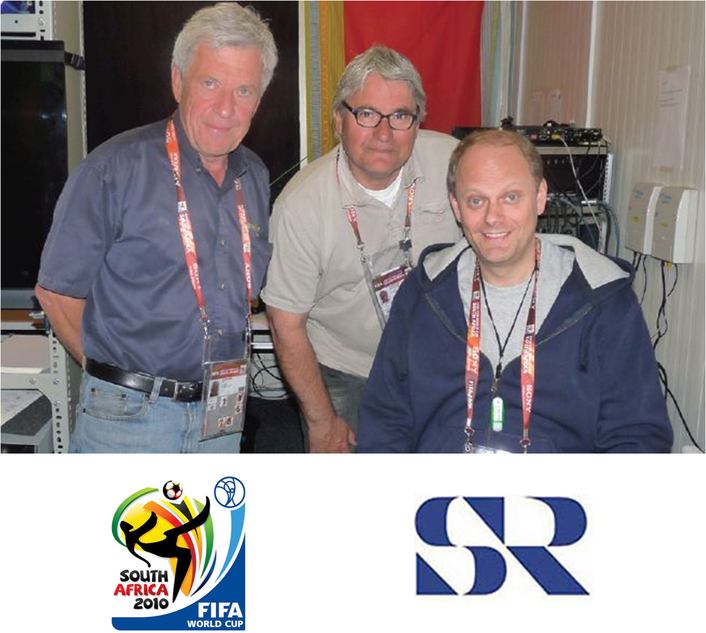 Per Josefsson, Team Leader, Thorbjorn Svensson, Technical Producer and Lars Granqvist, Commentator - three members of Team SR
A team of eight - three commentators, two experts, a technical producer, and one “data guy” - working alongside Team Leader Per Josefsson make up the group representing SR-SE, Sveriges Radio, here in South Africa. Providing full commen­tary for 53 matches – 30 from the venue commentary positions and 23 using the off-tube facilities at the IBC – Per explains that there is huge interest in Sweden for football, despite the national team not qualifying.

“Swedish people are big football fans,” Per says, “with a big interest in the big stars of the game. We have been getting listeners in numbers in the region of 500,000 to one million. It would have been a lot more if the Swedes were play­ing.” Attending every FIFA World Cup™ since 1978, in Argentina, Per has found his experience in South Africa to be a very pleasant one. “I’ve been to South Africa several times, and have really fallen in love with the place,” Per adds, “the people are generous and friendly, and of course when it is winter in Sweden, it is summer here!”

Receiving match signals from the venues at the IBC before sending them on to Sweden, SR have to take into account an interesting aspect of their broadcasts: “A lot of people back home will be watching the games on the television,” Per says, “however we have learned that they prefer to listen to the radio sound alongside this. Because of the delay in picture signal, we have to factor in a delay of roughly five seconds, so that the two experiences sync for the audience.”

Per and SR have made good use of the Audio Server provided by FIFA and HBS. “It’s proven invaluable in helping us put together pro­grammes,” Per explains, “we’ve been using it a lot with interview and press conference material.” As well as the match coverage, Per and his team are producing programming up to two hours before early kick-off matches, and one hour before the later evening games. “We’re sending out long transmissions, so it is good to have lots of material. HBS have been very good,” concludes Per, “they are really aware of the needs of radio broadcasters, and therefore have really taken care of us.”

FIFA and HBS extended their commitment to radio broadcasters at the 2010 FIFA World Cup™, offering an innovative dedicated Audio Server. Broadcast-quality audio tracks (an average of 50 per day) of one-to-one, mixed zone and post-match flash interviews and a compilation of press conference soundbites of every team in the tournament (MD-1 and match days) are available. Up to ten minutes is uploaded per team per day.

“We have to produce a large amount of programming for 38 million listeners,” explains Oliver Frich, Team Leader for ARD Radio. “To have such a volume of material available, and so quickly - especially when working in such a large country - it really has been great, something we have used a lot.” This is a view echoed by Riccardo Cucchi, Team Leader of Radio Rai: “We have been using the service for our news reports on a daily basis, for us it is a very interesting service, in particular the access to press conference and interview material.” Being a web-based application, the Audio Server is accessible from anywhere in the world and therefore offers a cost-effective solution, especially for radio broadcasters not on site at the IBC.

The audio material is available on the Audio Server for approximately 48 hours, in the AAC file format at 192 Kbps.