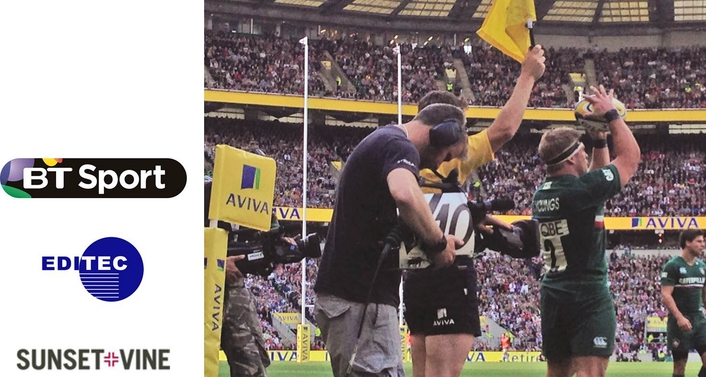 “We are delighted to have appointed Editec to work on our BT Sport live production requirements” said David Tippett, Executive Producer at Sunset+Vine. “Over the years we have built a successful relationship with Steve Cotterill and his team. This started when they first introduced us to the early EVS servers, and now continues the exceptional I-MOVIX range of Ultra Slo Mo camera systems.”

"Editec’s specialist knowledge, along with its offer of free trials, has helped to ensure that we have the right cameras for our requirements. We are looking forward to working with them to secure some spectacular images from the I-MOVIX cameras over the coming EPL and Aviva Premiership seasons."

Steve Cotterill, managing director of Editec said "It's really exciting to have the opportunity to work with Sunset+Vine across these BT Sport events. We are fully aware there is always a choice in suppliers and so we thank them for putting their faith in us."

The I-MOVIX range of products have been designed specifically for extreme slow motion and have been received with great acclaim by both sports and commercial customers worldwide. With superfast installation and user-friendly custom-designed control panels, the cameras run off a standard SMPTE fibre and take broadcast B4 mount lenses. For film use, an adapter enables any PL mount lens to be used.

I-MOVIX is the worldwide leader in extreme slow motion for sports broadcast from 75fps to over 5,000 fps. I-MOVIX offers the first true ultra-slow motion solutions fully integrated for broadcast use, with an unprecedented combination of very high frame rates and instant replay with a continuous streaming option.

Editec is proud to be the sole UK distributor of the I-MOVIX Sprintcam and X10 hi-motion camera systems. The systems are also available for rental from Editec along with skilled operators and engineers.

Sunset+Vine is a leading independent supplier of sports programming to broadcasters in the UK and overseas. It has won over 35 broadcast awards including six BAFTA and nine Royal Television Society awards.
The company was recently appointed production partner for the new BT Sport channels including live English Premier League Football and Aviva Premiership Rugby.
Sunset+Vine jointly produced all of Channel 4’s 2012 Paralympic Games output and was the only independent production company appointed by the BBC for the London 2012 coverage, producing the sailing from Weymouth. In 2014 Sunset+Vine will be Host Broadcaster of the Glasgow 2014 Commonwealth Games.