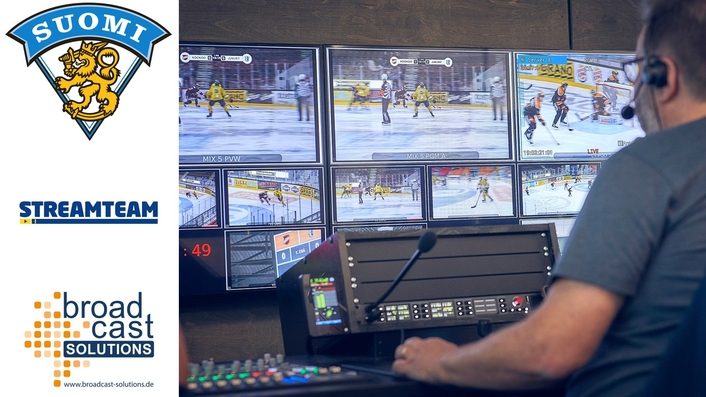 Finnish broadcast production company Streamteam Nordic has gone live with a new 4K/UHD remote production hub and virtual studio in Helsinki. The facility will handle all matches of the Finnish Ice Hockey League, which will be broadcasted by Finnish/Swedish telecom provider Telia via its IPTV service, set-top boxes and streaming platform, beginning with the 2018/2019 season.

The Finnish league plays more than 450 matches per season, with up to seven games simultaneously. Covering all matches simultaneously (in both HD and UHD) and adding studio production to the program required Streamteam Nordic to build a centralised production hub. The technical solution was designed and implemented by Broadcast Solutions, and it represents the largest broadcast investment in Finland in this millennium. 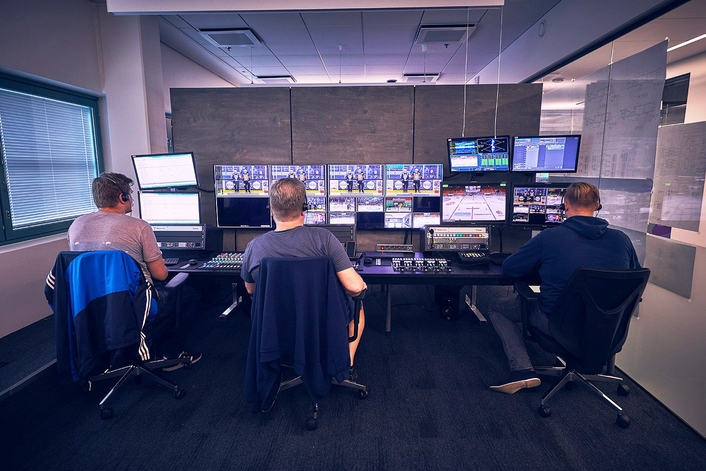 Streamteam’s production facility also includes a centralised video referee room with up to four video referees overseeing the matches in all venues. The overall system design takes a hybrid approach, leveraging IP-workflows for interconnecting the venues and hub, while production within the hub and the studio uses 3G baseband format. Transport between the hub and the venues is based on Nevion’s Virtuoso platform, with JPEG2000 over 10 Gbit fibre connections.

Helsinki Production Hub
Currently, two of the seven matches are produced in UHD and five in HD. For the UHD matches, a large remote set is used with 14 Panasonic cameras. The HD matches are covered with a remote set consisting of 9 Panasonic cameras. Four cameras, also Panasonics, incl. two on telematics robotics are on location in the virtual studio. Within the hub, a Grass Valley Momentum production platform is partnered with seven Kahuna production switchers and a Sirius 850 video matrix (456x840). 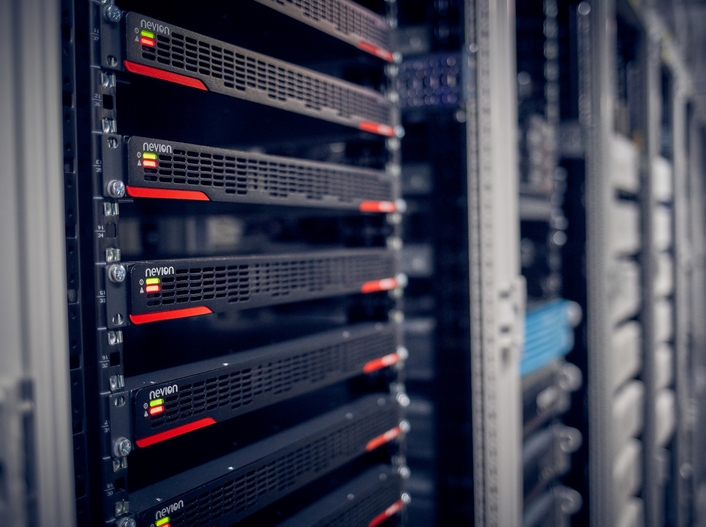 Lawo’s VSM (Virtual Studio Manager) system is used for overall control of all video and audio signals for the router, vision mixer, multiviewers and tally, as well as the hub’s Studer and Soundcraft audio consoles and greenMachines. VSM’s ability to pre-configure and recall workflow setups for specific tasks and matches optimises the use of the physical resources within the hub.

A 42-fader Studer Vista V with a redundant Compact Infinity Core serves as the primary audio console in the main audio control providing 5.1-channel audio, while each of the production rooms is equipped with a Soundcraft Performer audio console.

Graphics are generated by using ChyronHego’s Prime graphic platform together with a Live Assist playout automation engine that also offers an intuitive user interface. ChyronHego’s Paint was selected as a sports production analysis and telestration tool.

Communication within the hub and to the venues relies on Riedel Artist 128 and 64 mainframes, using Riedel AES67 intercom panels within the hub. Sixty-four MADI channels provide tielines to the Studer Vista V system. The wireless connectivity in venues relies on Laon’s belt pack solution.
With the large number of dedicated control rooms and hockey matches to be covered, as well as the need to change setups between match days, flexibility in accessing all resources is the key. This is addressed through an IHSE Draco tera KVM matrix with 160 ports, which provides access to 45 workplaces and 55 servers and PCs.
In the virtual studio, Zero Density Virtual Reality software supplied the photorealistic virtual studio set, with a Telemetrics robotic and tracking system used to align video signals with graphics. 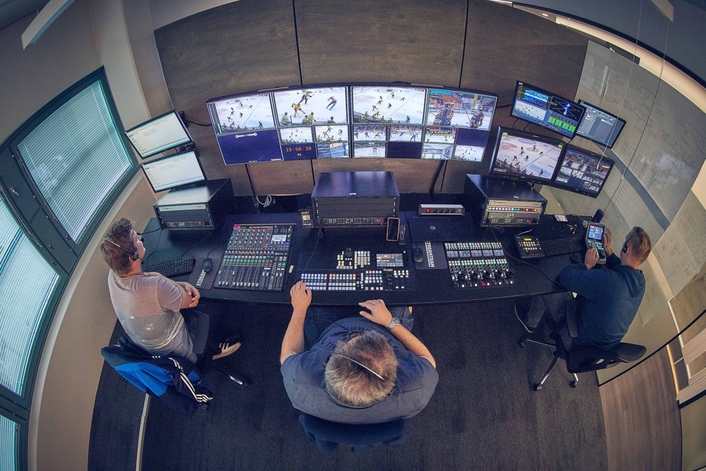 Telia acquired the content rights for the next six years starting from the opening of the 2018/2019 season. With the new remote production hub, Streamteam Nordic commands of a state-of-the-art production facility unrivalled in Finland and there are plans to migrate all matches to 4K/UHD production within the contract period as well as enhance the production with other new technologies to serve Finnish ice hockey enthusiasts even more. 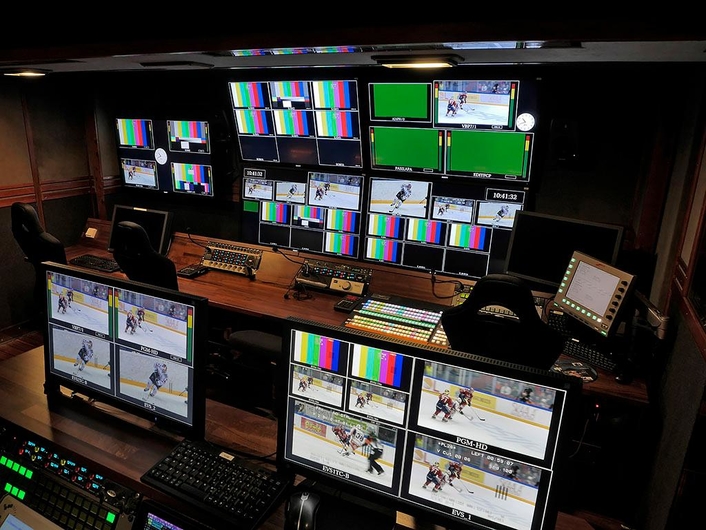 Juha Koskela, CEO, Streamteam Nordic Oy:
“With the new remote production facility, that uses the latest technology innovations and workflows, we will operate the most modern broadcast infrastructure in Finland. This will give us a boost to expand our business further in the country and also abroad. Remote production has already shown its benefit in terms of operability and flexibility. Broadcast Solutions was definitely the right choice for a partner in this demanding project both technically and time-wise – their outstanding expertise and hardworking team fulfilled our high expectations.”

Antti Laurila, Managing Director, Broadcast Solutions Finland Oy: “As a Finnish ice hockey fan, it was a rare and great opportunity to be involved with a project that brought a production of the Finnish national sport - ice hockey to a totally new level both technically and operationally. The successful implementation was a sum of great expertise and teamwork among all involved parties. It was a privilege for us to play a key role in this innovative sports production project.”
Broadcast Solutions and Streamteam Nordic will host an open house event in the facility on 7-8 November, accompanied by lectures on future technology trends, an exhibition area, and the opening of Broadcast Solutions Finland’s new office premises in the same building.

You can register for the event using the event page https://www.eventbrite.de/o/broadcast-solutions-11796268883 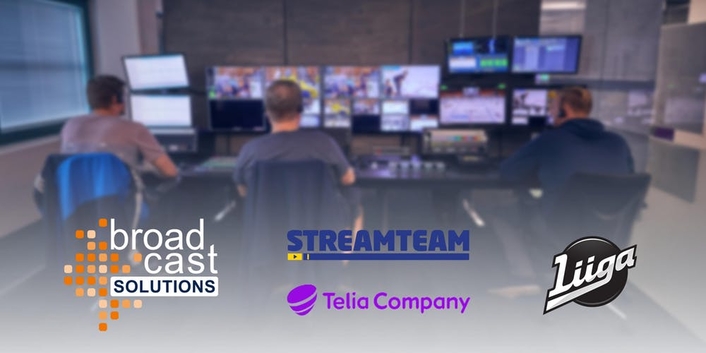