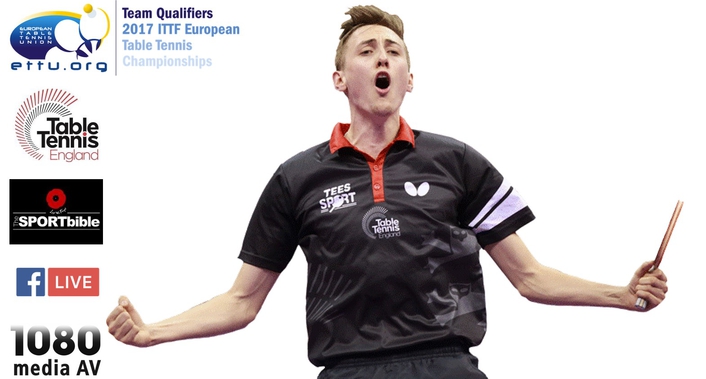 Table Tennis, while an Olympic sport, and hugely popular in Asia, is not so well known in Europe. Getting a broadcast slot for this even at national level of the sport is not easy, especially in the UK. Therefore, working with Table Tennis England, the national governing body of the sport, it was decided to ‘experiment’ and broadcast the recent England v Greece European Qualifying match directly on FaceBook Live, using the popular ‘Sportbible’ FaceBook page.

1080 media approached the broadcast as though it were for a major broadcaster with 7 camera coverage, commentary and graphics. We realised in testing, the having the scorecard  the usual size wouldn’t work on FB and it needed to be high up on the screen due to all of the ‘Likes’ and comments on the lower third of the screen, especially for this watching on mobile phones.

To the astonishment of everyone involved in this ground breaking experiment for the sport, over the 4 hour broadcast, 2.2 million unique visitors watched the match. Perhaps it helped it was a truly nail-biting tournament, enabling some top class action coverage; England were 0-2 to Greece, then clawed back to 2-2, offering viewers a 5th match decider; that went to 5 sets, and England triumphed to win 3-2.

Mark Taffler, Head of Commercial at Table Tennis England commented: ‘’1080 Media’s coverage was excellent which helped drive viewer interest without doubt. We’ve proved that there is a market for this kind of broadcast – and that it’s a big market. As a strategy, it’s proved incredibly effective. The same night as Man City were playing Barcelona in the Champions League, there were 2.2m people watching table tennis. There is an appetite from people to watch our sport and, through a platform like The SPORTbible, we are finding them.”