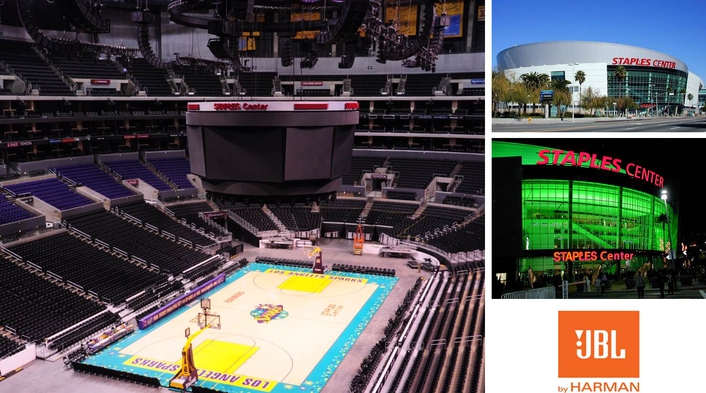 New JBL System Provides Cutting Edge Technology For Even Sound Coverage Throughout The Entire Arena
STAPLES Center is home to four professional sports franchises, the NHL’s Los Angeles Kings, the NBA’s Los Angeles Lakers and Clippers and the WNBA’s Los Angles Sparks. As the world renowned arena gets ready to open the doors for its thirteenth season, fans will be treated upon entry to a brand-new $3.4 million HARMAN JBL Professional VERTEC® audio system, a premier line array loudspeaker system that is in use worldwide to support numerous international tours and special events.

Following the recent installation of the new Panasonic LIVE 4HD video scoreboard system, the sound system upgrade was due in large part to address the arena’s need to provide the best audio system and technology available on the market to its tenant teams and national touring productions and concerts, as well as for special events like professional boxing. The new system is designed to enhance the sound of touring production shows by allowing them to selectively use the installed system in a signal-delayed capacity. STAPLES Center will provide touring sound crews with a Wi-Fi tablet for remotely adjusting delay times, EQ, and levels. By augmenting the incoming portable touring systems this available option will provide better coverage and sound quality throughout the arena.

“We are incredibly excited to unveil the brand new JBL system to kick off our thirteenth season,” said Lee Zeidman, Sr. Vice President & General Manager, STAPLES Center.  “Technology has grown tremendously since we opened STAPLES Center in 1999 and as part of our overall annual upgrades we decided it was time for us to improve our audio system.  It is important to us to keep providing a better fan experience for our guests and offer cutting edge audio technology to our tenants and the numerous tours and special events that we host each year.”

·    Main Clusters: Eight arrays of JBL’s VT4889DP-DA three-way powered line array modules are in use for the main system. Each cluster contains between 11 and 13 cabinets, with special attention having been paid to improving sound coverage and clarity in the upper bowl seating areas through precise array positioning and focusing technique.

“The specialized audio needs of a multi-purpose sports and entertainment venue like STAPLES Center, combined with today’s audience expectations for an exciting and immersive sound experience, require a truly unique solution,” observed JBL’s David Scheirman. “When we designed this new VERTEC system, it was with top-tier venue applications like STAPLES Center in mind. Our entire team took a personal interest in this project, and we took a hands-on approach to working with the designers, installers and venue staff to really dial-in this system. STAPLES Center is now equipped with our latest loudspeaker system technology, combining advanced networking capabilities with digital signal processing, integral power amplification and advanced control software. This is the largest and most comprehensive installation to date of JBL’s digitally-networked, powered VERTEC speakers.”

HARMAN HiQnet™ is the world's first connectivity and control protocol that integrates all product categories in the signal chain for professional audio systems of all types, size, and applications. HARMAN HiQnet no longer requires the user to manage multiple disparate operating systems or be responsible for programming individual signal processors, speaker controllers, wireless microphone systems, and mixing consoles. HiQnet was developed by engineers from across HARMAN’s Professional Division and is coordinated by the System Development and Integration Group (SDIG), a team of dedicated systems specialists based in Salt Lake City, Utah

About STAPLES Center
STAPLES Center, back-to-back recipients of the prestigious Pollstar-CIC Arena of the Year award, has clearly established itself as the sports and entertainment center of the world. As the home of four professional sports franchises – the NBA’s Los Angeles Lakers and Los Angeles Clippers, the NHL’s Los Angeles Kings and the WNBA’s Los Angeles Sparks – STAPLES Center has proven to be a home court advantage for the local teams. STAPLES Center continues to distinguish itself as the host of major, high-profile events of national and international distinction including the 2004 & 2011 NBA All-Star Game, the 2002 NHL All-Star Game, the 2000 Democratic National Convention and 2009 World Figure Skating Championships, eleven GRAMMY Award shows as well as the annual X Games competitions and Pac-12 Basketball Championship tournaments. STAPLES Center’s twelve years have also been marked with performances and special events that brought international stature to the downtown Los Angeles venue including concerts by Bruce Springsteen and the E Street Band (who played the arena’s first-ever public event on October 17, 1999), Prince, U2, Paul McCartney, Garth Brooks, Usher, Jay-Z, Kanye West, Taylor Swift, Roger Waters, Britney Spears, Beyonce, Mana, Sade and Justin Timberlake, as well as world championship boxing including Lennox Lewis vs. Vitali Klitschko for the World Heavyweight Championship. Hosting over 250 events a year, the arena’s reputation for world-class amenities, features and commitment to quality of service and the guest experience is second to none.