Stage is Set in Sochi with Events About to Get Underway 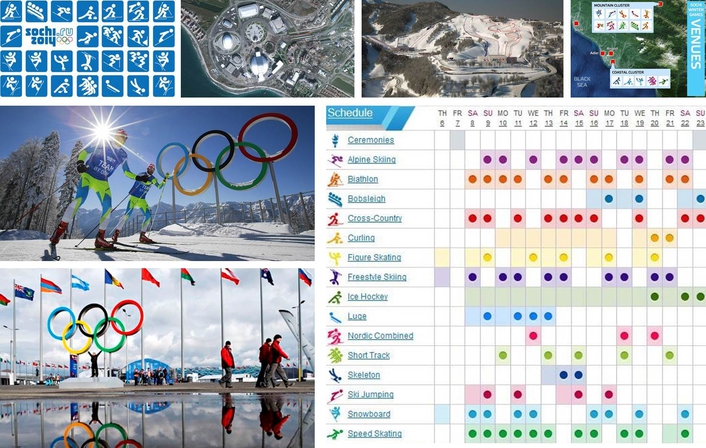 .
Russia's bid for the 2014 Winter Olympics was part of a broader goal to step back onto the world stage as host of major sporting events (the country's last event was the Moscow Summer Olympics back in 1980). The challenge was threefold: to convince the International Olympic Committee that Russia had both the vision and the infrastructure to host such a major event; to develop the popular summertime coastal resort of Sochi into a world class destination for winter sports, and to design a stadium flexible enough to facilitate the Olympic ceremonies, then act as a venue for FIFA World Cup matches and, finally, become the home venue for a local football team.

Each of the 11 competition venues for Sochi 2014 have been built from scratch, with facilities split into two ‘clusters’ – one by the coast and one in the mountains – creating the first ever Olympic Park at a Winter Game.
This unusual step guarantees a unique legacy for these Games, marking Sochi out as a winter destination for decades to come. Within the park, the main level of the stadium is raised on a landscaped mound, providing stunning views from within. The unique engineering systems will enable truly memorable opening and closing ceremonies. At the heart of the Olympic Park is the unique, Fisht Olympic Stadium, which will host the Opening and Closing Ceremonies of the Games.

The building features a temporary shell-like roof based on the jewel-encrusted Fabergé eggs that have become an icon of Russian culture. Constructed from translucent polycarbonate, this roof will facilitate light projections during the games and is linked by the architects to the snow-covered peaks of the Caucasus Mountains.

The south side of the building was designed to shelter the stadium and spectators from the adjacent seafront, while longer elevations on the east and west sides open out to the plaza where the cauldron will be on show.

Other eye-catching venues in the Olympic Park include the 12-000-seat Iceberg Skating Palace, which features a beautiful glass façade, and the Bolshoi Ice Dome, which is designed to resemble a huge frozen water droplet. It is one of the most beautiful venues in the park. It is a splendid building. It has one of the largest media facades in Europe and can project any image onto the roof.

The Adler Arena Skating Center is an 8,000-seat speed skating oval in the Olympic Park. A crystal face theme is supported by angular walls and triangular stained-glass windows. The gray and white color of the building enhances this impression. The walls along the sides of the skating rink are made transparent so that spectators can look outside. The skating center is designed to make the utmost use of local natural features.

Finally the "Ice Cube" Curling Center is part of the Coastal Cluster. It is simplistic in its design and a moveable venue, making it possible to be dismantled and transported for post-Games use as a curling center in another Russian city.

The mountain cluster contains five competition venues in the Krasnaya Polyana mountains.
The 7,500-capacity Laura Biathlon and Ski Centre – which will host biathlon, cross country skiing and Nordic combined – features two stadiums each with their own start and finish zones, two isolated track systems, a shooting area and warm-up zones.

Freestyle skiing and snowboarding will take place at Rosa Khutor Extreme Park, which can hold 4,000 spectators and will remain as a permanent venue for elite competitions after the Games, with specialized tracks for cross-country skiing, aerials, moguls, parallel giant slalom and half-pipe.

Finally, the RusSki Gorki Jumping Centre will host ski jumping and also the jumping section of Nordic combined, while bobsleigh, luge and skeleton will all be staged at the 5,000-capacity Sanki Sliding Centre.

Each of the venues has already hosted elite-level competitions, with many staging World Cup events over the past two years, and they are now ready to catch people’s attention during the Games.

The planning for Sochi 2014 started soon after the city was elected as the host city in 2007. Since that time Olympic Broadcasting Services (OBS) has been working closely with the Sochi Organizing Committee (Sochi 2014) of the Olympic Winter Games  in all areas impacting broadcasting including the competition schedule, International Broadcast Centre (IBC) and Mountain Broadcast Centre (MBC), venues, transportation, accreditation, accommodation, logistics and technology. In addition to its various meetings with members of Sochi 2014, OBS has also worked very closely with the Rights Holding Broadcasters (RHBs) to confirm their specific requirements at the venues and IBC/MBC.

Coverage resources
The OBS team has increased from 150 full time employees to a workforce of around 2,700 people by the start of the Sochi 2014 Games on Friday 07 February 2014.
More than 450 cameras will produce more than 1,600 hours of live coverage for the RHBs and their various distribution channels.
OBS has also installed 700 commentary positions and will provide a range of services to the RHBs at the competition venues, the IBC and the MBC.

IBC/MBC
The IBC, located at the Coastal Cluster, is serveing as the primary base of operations for OBS and the RHBs while the MBC is offering RHBs the opportunity to use their post-production facilities within short distance of all mountain competition venues.
With a total area of 62,000 sq. metres (gross), the IBC consists of approximately 38,670 sq. metres of functional space on different levels. It is houseing a variety of technical and administrative facilities for both OBS and the RHBs including edit suites, control rooms, studios and offices.
The size of the MBC is 8,900sqm (gross) with a functional area of ~5,000sqm includes a Master Control and bookable stand up positions. The MBC provides full connectivity with the IBC via video, audio and data links.

First Action of the Games: Snowboard and Figure Skating

With the first events of the 2014 Olympic Winter Games set to get underway today, Sochi’s spectacular new venues are ready to play host to the world’s greatest winter sports stars.
The first action of the Games will see snowboard slope style making its debut as an Olympic event, with the men’s and women’s qualifying round due to take place at the Rosa Khutor Extreme Park. Qualification will also take place for the women’s moguls, while the Sochi figure skating competition will get underway with the pairs and men’s short program being held as part of the new team event.