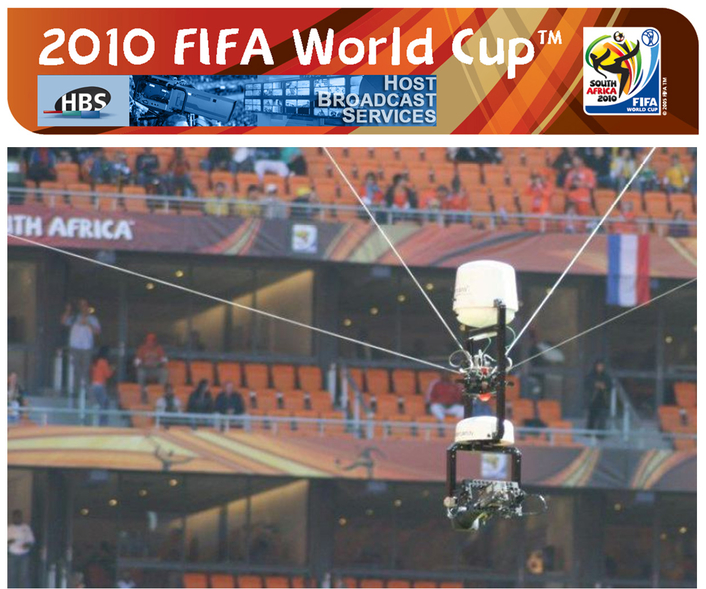 Spidercam, does whatever a spider can
A cable camera system is imple­mented at five of the 2010 FIFA World Cup™ stadiums – Cape Town, Durban, both Johannesburg stadiums and Nelson Mandela Bay/ Port Elizabeth. The ‘Spidercam’, operational at four of these ven­ues, enables the flight and move­ment of a camera across a three dimensional field. “Each of the systems in use has a team of three with it,” explains Jens Peters, Operations Technician, “two joystick opera­tors, one for the Spidercam system itself, and one for the camera, and one technician for setting up, checking, maintenance and so on.”

Spidercam is made up of two companies, Spidercam Austria and Spider­cam Germany; “The Austrian arm deals with the technical side and the German with the rentals,” adds Jens, “however, they are effectively two departments of the same company. Spidercam have been developing the system since 2000, and got its inaugural use at the Allianz Arena, the Bay­ern Munich home stadium in Germany in 2004. We’ve been working on and improving it all that time. This is the latest version.”

Held in place by a series of four pullies and four wires, with a maximum span of 250x250m, the camera operates on fibre-optic wires. “This is a benefit in such areas of heavy radio and wireless use,” says Jens, “it means that we don’t disturb others and we are not disturbed ourselves.”

“The camera body is using HD lenses to keep in line with the overall stan­dard of the tournament,” continues Jens, “this is an HD project, so the idea is to seamlessly match its footage to that of the shoulder and static cameras also being used.” The system has also seen some improvements in speed for this FIFA World Cup™, the camera is now able to travel at nine metres per second, and has a turning speed of nearly 100 degrees per second, enabling it to more closely follow the action on the pitch.