SOUND.COM, leading provider of sound reinforcement and turnkey audio solutions, was chosen to provide the audio solutions for the Opening & Closing Ceremonies at the South Asian Games 2016, held at Indira Gandhi Athletic Stadium in Guwahati recently.

Once again, they constructed a robust digital network around a redundant Optocore backbone, spanning six nodes, to transport pristine audio around the stadium.

Since managing sound for The Commonwealth Games 2010 in Delhi, SOUND.COM has gained the reputation of being a specialist in providing advanced audio infrastructures for major ceremonies and has taken major sporting events to the next level in India, including The Indian Premier League, Indian Super League and National Games 2011 & 2015. 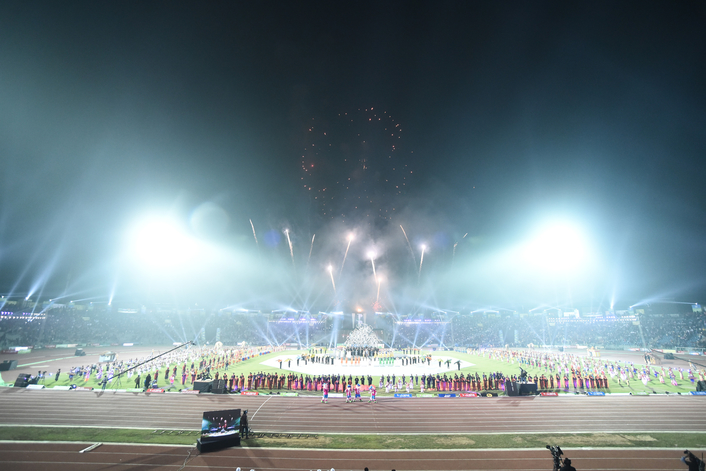 The opening ceremony was a 180-minute spectacle managed by the Encompass core team, while the Games were officially declared open by Prime Minister Narendra Modi. The ceremonies have earned the distinction of being one of the biggest ever sporting extravaganzas of the North East and have provided an excellent showcase of the region's rich cultural and natural heritage. 4500 participants, including 2600 athletes from eight nations — Nepal, Bangladesh, Bhutan, Sri Lanka, Maldives, Pakistan, Afghanistan and India — participated in 22 disciplines across the 12-day Games, in the two cities of Guwahati and Shillong.

The primary audio source was fed via AES to all amplifiers, thus delivering astounding audio quality that remained pristine across the turnkey sound system.

Explaining the layout, SOUND.COM MD, Warren Dsouza, stated: “The audio system was designed in the round, with the stadium divided into six nodes — FOH, North, South, East, West and Monitors in a redundant loop.”

At these particular ceremonies all the VIP tribunes and Athletes Oath podiums were picked up off the Optocore devices from the west node and routed (via Optocore YG2 cards) straight to the Yamaha M7CL console that served as the main mixing console, whilst another Yamaha console was used as the back-up desk. The performances themselves were mixed on a Soundcraft VI6 console.

The X6R-FX provided the primary interfaces with Optocore DD4MR-FX at FOH. “We interfaced the Optocore devices to the Soundcraft and Yamaha consoles. Signals were sent through the Optocore matrix through various nodes and Athletes Oath speech microphones,” continued Dsouza. “The Prime Minister’s VIP Tribune speeches were picked up from the X6R-FX 16 Mic devices to the Soundcraft and Yamaha desks. The DD32R had AES audio signals fed into each of the amplifiers and in some places converted from AES to analogue for audio feeds.

“The closing ceremony had the VI6 interfaced to the stage boxes via [Optocore’s new] M12 MADI bridges at the Monitor/Stage node, and into the VI6 through the DD2FR.”

Summing up, he said the ceremonies had been a resounding success with a perfect blend of technology, creativity, culture, music and entertainment. “Overall the event enjoyed fantastic audio quality, with a robust integration of the digital audio network thanks to Optocore. By keeping it simple, with industry standard protocols, just made everything so easy.”

Optocore systems engineer was Ranjeet Singh, with Dsouza himself the overall audio director.

About SOUND.COM
Founded in 1998, SOUND.COM’s mission is to provide total audio solutions at live experiential events. With a passion for great sound, unparalleled service and technical expertise, the company is committed to enhancing the sound experience and enabling event managers, artists the audience to build a palette for perfect sound. SOUND.COM is head quartered in Mumbai, India. The company’s reputation and reliability in landmark live events, has been recognized by the professional audio industry with the ‘Best Sound Rental Company Award’ for three consecutive years (2012, 2013, 2014) at the PALM Awards.