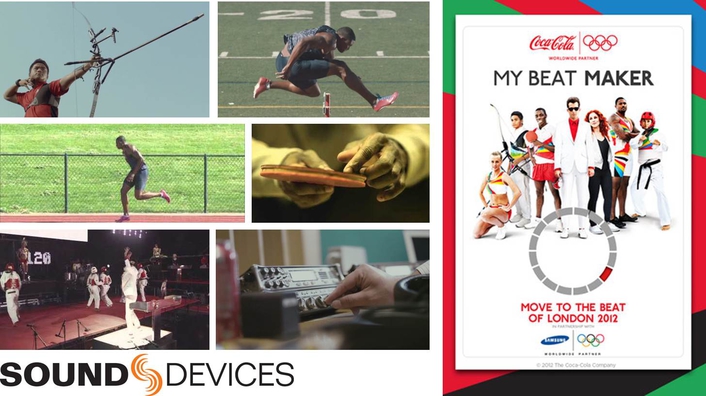 Digital Audio Recorder Captures Sounds of World-Class Athletes in Action
Sound Devices, experts in portable audio and video products for field production, is pleased to announce that its 788T digital audio recorder captured the sound of world-class athletes in action for Beat 2012, a documentary chronicling Mark Ronson’s creation of Coca-Cola’s anthem for the 2012 Summer Games. Ronson, along with Location Sound Recordist Diego Sanchez, relied on the 788T to record the sounds of the five different athletes from five different countries and five different disciplines selected for the film.

For the documentary, directed by Kim Gehrig and produced by Somesuch & Co, Sanchez traveled with Ronson and a crew of five people to Singapore to meet an archer, Moscow to meet a 400-m runner, Mexico to meet a Tae Kwon Do fighter, Denver to meet a 110-m hurdler and London to meet a table-tennis player. As the crew observed each athlete’s routine in the arena and at home, Ronson listened to the principal sounds of each sport to get a feel for the right mix. With the technical support of Sound Designer Henning Köphnel and location recording advice from Sanchez, Ronson recorded the sounds while each athlete performed his sport.

“We decided to record the sport sounds to two linked Sound Devices 788T digital recorders, as we anticipated a multitude of different microphones in each situation,” says Sanchez. “We opted for Sound Devices for several reasons. First, I have used these recorders for years, and being the only member of the sound crew with location experience, it seemed logical to stick to them. Second, their small size meant a small package for a 16-track recorder, allowing the crew to relocate and reset, while filming with ease. Also, the amazing headphone monitoring and track routings of the 788T allowed crew members to each listen to a different mic or mix, while still recording all of them.”

According to Sanchez, the reliability of the 788T was another major consideration in selecting the Sound Devices recorder for the project. “From shooting outdoors in Singapore in the middle of summer to dealing with a 20-degree temperature change in the weather from day to night in Denver, not once did the 788T experience a crash, a file corruption or a failed recording. Also, the simplicity of the device’s L-style batteries meant we could have many of them and recharge them anywhere, even in the car. And the backup recording to compact flash cards meant an easy format for DITS in four different languages to load.”

Sound Devices’ 788T has become the next generation digital audio recorder for sound mixers requiring additional isolated tracks. Boasting eight full-featured inputs and recording to up to 12 tracks, it accepts either microphone or line-level signals, provides 48-V phantom power for condenser microphones, offers peak limiters for microphone inputs and features fully adjustable high-pass filters—all in a compact package. Routing flexibility allows each input to be routed to left/right mixed tracks, isolated tracks or aux tracks. The 788T has several options for recording media, an internal 160-GB SATA hard drive (256-GB SSD in the 788T-SSD), CompactFlash media with UDMA support, an external FireWire hard drive or DVD-RAM (with bus powering). Any or all of these features can be used simultaneously.

For the dialogue, Sanchez recorded to another 788T, using the Sound Devices CL-8 controller to mix. While he didn’t have the luxury of a boom operator while recording multi-tracks, he did need a mix for the edit. Therefore, he had to mix with one hand, which was a breeze with the CL-8.

The lightweight CL-8 can be used either mounted or remote from the 788T.  The CL-8 features eight large rotary faders to control levels of input-to-master-track (L, R) and input-to-aux-track levels (post-fade). With its tactile buttons, control over each input’s high-pass filter, limiter, polarity, mute status, and routing is quick, with visual indication on the CL-8 front panel. The CL-8 provides shortcuts to route inputs to the left/right mix tracks and aux 1 and aux 2 tracks.

“Thanks to the reliability and advanced capabilities of the Sound Devices equipment, we were able to capture some amazing audio,” concludes Sanchez. “The final documentary is a beautiful, inspiring and a very aurally rich 60-minute piece.”