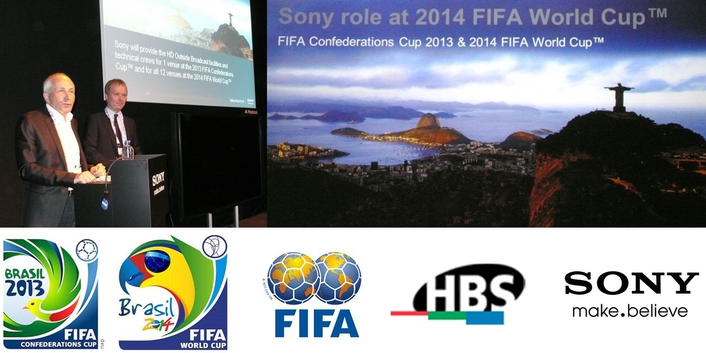 .
FIFA, HBS and Sony have announced that Sony has been selected as the general contractor responsible for the delivery of all outside broadcast HD at both the 2013 FIFA Confederations Cup and 2014 FIFA World Cup™, to be hosted in Brazil.

Reaffirming its position as a market leader in live sports production, the announcement follows Sony’s involvement in a number of the world’s biggest sporting events. Sony has pushed the boundaries of live production at events including the 2010 FIFA World Cup™, where 25 matches were filmed in 3D, the UEFA Champions League, the Ryder Cup and Wimbledon Tennis Championships for 2011 and 2012.

Sony will work in close partnership with HBS (Host Broadcast Services), which has overall responsibility for the production and transmission of the competition as the designated host broadcast service provider.

Filming and producing each of the 64 2014 FIFA World Cup™ games presents a significant logistical challenge. Working across 12 venues, Sony will provide both systems integration services and event time operations assisting the HBS production crew to deliver matches to fans around the world at the highest possible technical and production standards. 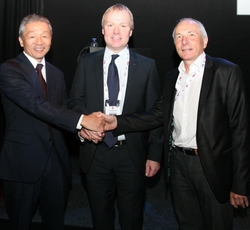 Sony will work with third party industry leaders (Riedel for the intercom solutions, Lawo/ABS for the audio mixing consoles, EVS for the mult-media servers and Gearhouse Broadcast for the TOCs) to bring together the equipment and staff resources pool required to address a project of this scale, including among others 340 HD cameras (of which 72 Supermotions), 48 switchers and 816 monitors.

Prior to the 2014 FIFA World Cup™, Sony will also provide integration services and event time operations for the 2013 FIFA Confederations Cup.

“Sony is delighted to once again be working alongside FIFA and HBS, with overall responsibility for broadcast production at the 2014 FIFA World Cup™,” said David Bush, Head of Marketing and Business Development, Professional Solutions Europe, Sony Europe. “We are committed to pushing the boundaries of live production and delivering an unrivalled viewer experience to the millions of football fans all over the world.”

Niclas Ericson, Director of FIFA’s TV Division, added, “Building on a highly successful 2010 FIFA World CupTM 3D experience in South Africa, we are excited to extend our relationship with Sony. The World Cup is an unparalleled live broadcasting event and in Sony we know we have a partner we can trust to deliver. ”

Francis Tellier, CEO, Host Broadcast Services, “ Sony’s experience and keen understanding of the requirements of such a large scale production convinced us that they were the right partner to work with. We are looking forward to working together to deliver 2013 FIFA Confederations Cup and 2014 FIFA World Cup™ to the highest HD requirements.”

After the announcement HBS CEO Francis Tellier and FIFA TV Director Niclas Ericson took part in a panel on the topic of the 2014 FIFA World Cup Brazil™ at the IBC Forum on Saturday 08 September. Both men pointed out the logistical challenges presented by the sheer size of the host nation but emphasised their utmost confidence that their respective organisations would be up to the task. "It's looking very good in terms of preparations," said Niclas.

Francis presented the production plan for the event, focusing in particular on the ever-expanding demand for multimedia content and pointing out that HBS' long presence on the frontlines of this particular issue put the company in an ideal position to meet this demand. HBS was digital-based from its first FIFA World Cup™ in 2002, when it immediately began creating more content than had ever been done before, producing multifeeds for live match coverage as well as for pre- and post-match sequences. "In 2006 of course we went fully HD," said Francis, "and introduced a media server, and in 2010 we had more than 40 ENG crews on the road producing content outside of the matches themselves. So at the end of the day, in 2014 there will not be a need to introduce much more than that." The issue in Brazil will therefore relate less to the production of additional content than to the issues associated with its distribution and delivery, but "it's stating the obvious that the 2014 FIFA World Cup™ will be fully multi-screen and multimedia."

Francis confirmed that due to both the distance between venues and the limited availability of OB vans in Brazil, HBS is currently planning to do without this component of traditional operational plans and to build temporary production facilities instead. "Anyway," said Francis, "our set-up now is so big that it doesn't fit in an OB van. […] The kits – provided by Sony – will be fixed at the stadiums, which is also a way of avoiding risks."