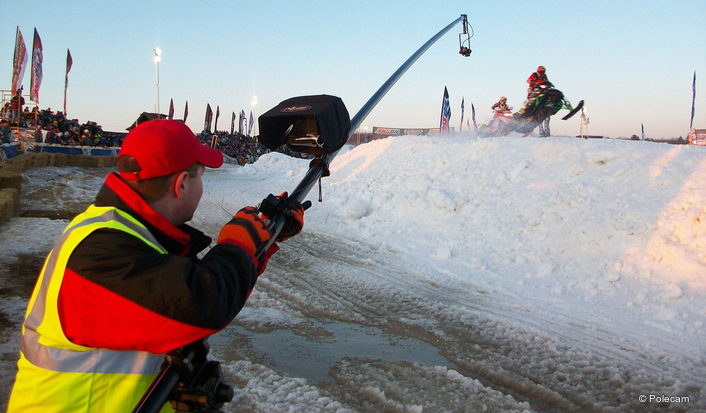 Polecam at SnoCross in Hayward, Wisconsin
Polecam operator Steve Rausch has completed his second season capturing ISOC National SnoCross Racing (SnoX). Nine events were organized by the International Series of Champions during winter 2009-2010, each race being streamed live on the internet and later edited into a one-hour show for transmission on the Versus cable TV network.

Cameras provide video to a Jumbotron

"The winter favorite of motocross racers and snowmobile riders and fans, SnoCross Races are held at various locations over the snowy states of the USA and Canada," Steve details. "Amateurs race the same tracks as the professionals. Many contestants have factory support and sponsors, generating a high-energy atmosphere similar to NASCAR. There are trailers, mechanics and team owners all over the place on race weekends. Most racers are from the US but some travel from Canada and Sweden to compete. Cameras provide video to a Jumbotron which then feeds a live video stream to the web. This feed gets a lot of international attention, especially from Sweden. Longhaul Productions out of Minneapolis is responsible for the production and produces a magazine show called 'Sledhead 24/7' about the SnoX races. It airs regionally on Fox Sports affiliates.

"When I purchased my Polecam in 2009, I knew it would benefit the production so I met with the producer for a demo. Longhaul liked what the Polecam could do and added it to the mix for the 2009-2010 season. Polecam is a great system for covering these races especially with the conditions and terrain being extremely challenging. My gear consists of a five-section Polecam with a Camera Corps HD Mini Zoom, recording to Convergent Design Flash XDR. I sometimes fit a Hamas HR.5x wide angle adapter and Tiffen filters. All depends on the light and what's coming at me. We can position our rig on the starting line or on steep corners and even move it between heats for completely different views. Polecam's lightweight construction allows us to place it on slopes where pedestal set-ups are just not practical. The Polecam also enables us to get shots from angles that would otherwise be impossible. And it is far safer than the heavy steel of a traditional crane when you are operating near fast moving objects on ice or snow."

Polecam was established in 1998 by extreme sports cameraman/director Stefan Hewitt. While directing a series of windsurfing kit commercials in Hawaii, he needed to obtain close wide-angle front sequences of a windsurfer in action, shot from a tracking boat or jet ski. Stefan improvised a rig comprising a miniature camera on a carbon-fiber windsurfing mast. Returning to Britain, he developed a lightweight go-anywhere rig with a remote joystick controlling a high-precision pan and tilt head. Polecam is now supplied in HD and SD versions with a range of additional options including underwater and 3D pan/tilt heads. Polecam Ltd is active globally from its base near Bedford, England.