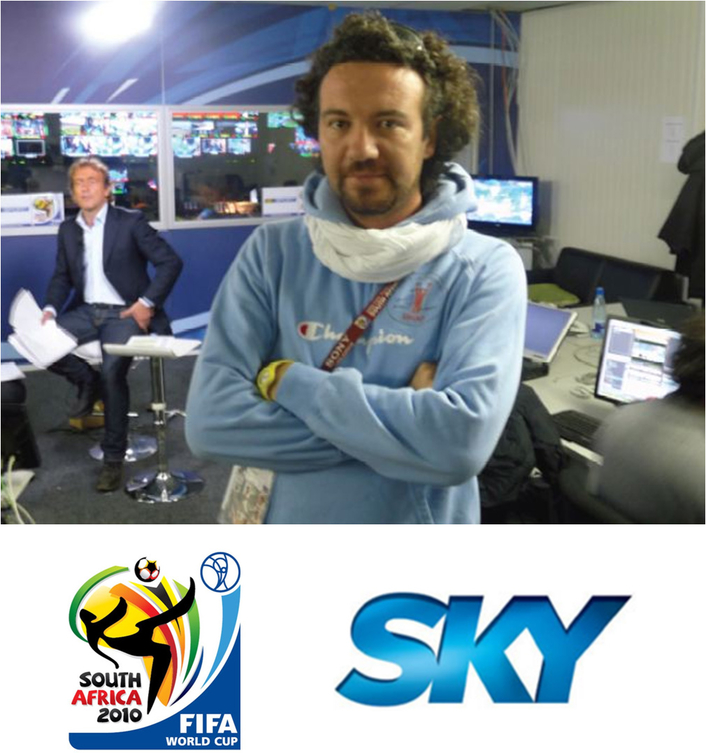 Producer Damiano Joli, keeping ahead of the action with Sky Italia
Every FIFA World Cup™ is dif­ferent – in more ways than one, as Sky Italia Producer Da­miano Joli has discovered. “For me it is a very different expe­rience, in 2006 I exclusively followed the Italian team as producer for their matches,” explains Damiano. “Here it is a completely new experience, because I am Sky Italia’s main contact in South Africa. It has been a good challenge for me and I am finding it really exciting.”

Unfortunately, though, things did not pan out as positively for the Italian national team as they did four years ago. “If I told you that there has been no difference to our audience since Italy were eliminated then I would be lying,” reveals Damiano. “Obviously we had good ratings for the Italian matches but we were actually really surprised because the Round of 16 match between Germany and England was an exclusive for Sky Italia and we took an 11% share, which was a record for us.”

Broadcasting all 64 matches in HD, Sky Italia naturally had a large presence at Casa Azzurri – including a special HQ on site. With a dedicated OB van following Marcello Lippi and his squad they were able to bring full cover­age of Italy’s brief stay in South Africa, but that team has sadly had to head back to the peninsula with the players – reducing slightly their initial staff of almost 80 people.

“The pressure is just a little bit smaller now,” Damiano explained. “We are still a broadcaster of the World Cup, though, so we still have a studio broadcast before and after every match. And on the days without matches we have a big three-hour production going out during prime time.”

With Italy eliminated they have been able to push more of their focus on to the other competing nations. “Now we are following the tournament with four SNG trucks, who are covering the team HQ’s, training sessions, press conferences and so on. We also have eight crews travelling around South Africa because we have a news channel on air all day.” While a new replay machine is being used back at their studios in Milan, their biggest development on site in 2010 has been with regard to the FIFA Max Server. “We have an IP Director this time, in 2006 we only used the FIFA Media Server but now we have an IP director and are collating all the features on this server so our team can take whatever they want from it.”