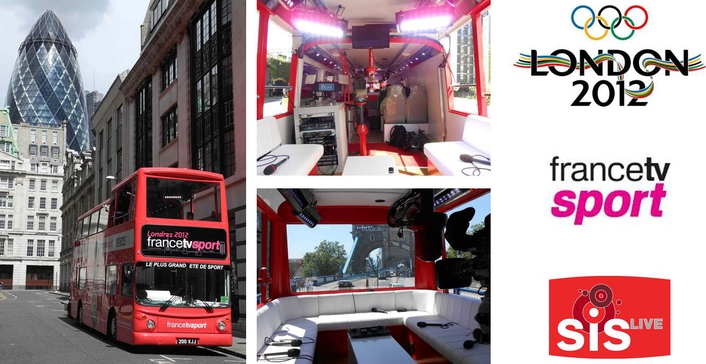 Built into the body of a traditional red London bus, this mobile studio delivers a 50 minute live morning show each day
Outside broadcast, uplink and systems integration specialists SIS LIVE has been working in a collaborative venture with France Televisions Sports Department to achieve a historic premiere in broadcasting, delivering the first ever live broadcasts from a mobile TV studio.

Commissioned by France TV Sports, SIS LIVE’s British and French divisions have collaborated to design, construct and operate a live moving TV studio to deliver coverage of the London 2012 Olympics. Using state-of-the-art RF H264 technology and the expertise of SIS LIVE’s Comms specialists this vehicle is able to produce and transmit live TV while on the move, making dynamic use of 4 fixed receive high points around London which deliver RF coverage on selected routes around the city centre. This intelligent use of technology alleviates the need to employ a costly fixed wing aircraft relay solution, making this type of transmission a more viable prospect.

The routes, which include Parliament Square, Hyde Park, Pall Mall, Piccadilly Circus, Embankment and the Tower of London, have been chosen to provide iconic London backdrops to the mobile bus broadcasts. Programmes and inserts from the bus are received by the SIS LIVE city-wide network and connected directly to France TV Sport’s London Olympic base for onward fibre transmission and subsequent broadcast on TV and online.

Built into the body of a traditional red London bus, this mobile studio delivers a 50 minute live morning show each day featuring guests, panelists, live music from the likes of Katie Melua and Imani, as well as discussions concerning the French Olympic Team’s progress through the Games. It is also used to record clips which are periodically inserted live into the main programme throughout the day. The bus itself, fast becoming the iconic representation of France TV in London, is featured heavily in the channel’s teasers and opening/closing credits, highlighting France TV Sport’s exclusive Olympic broadcasting within the country. 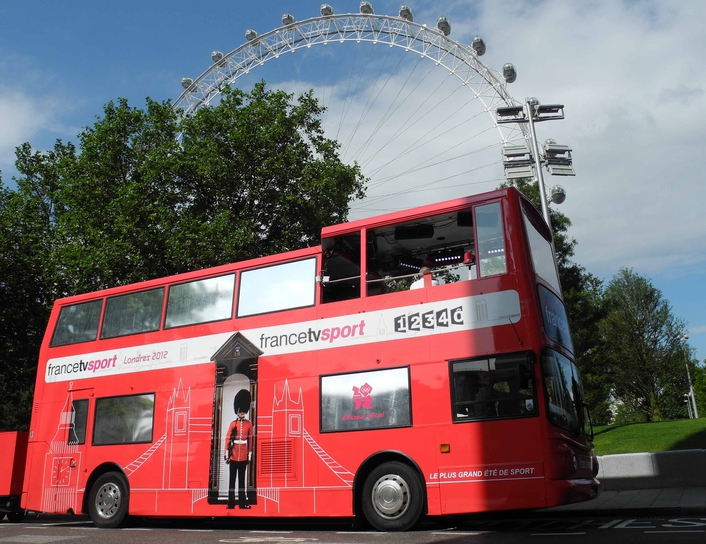 Jean-Louis Cleret, managing director, SIS LIVE France says “We have a long history of working with France Televisions and were pleased to be involved in this innovative project right from the initial planning stages through to delivery of the final programmes. Our experienced team, lead by systems integration manager Yann Le Chanony and production manager Jonathan Endley, have shown not only their technical excellence, but also their ability to develop close working relationships with the clients, to successfully deliver this project.”

The project involved the co-operation of a number of SIS LIVE’s departments based in Britain and France with technology installed at SIS LIVE’s facilities in Milton Keynes and Langley. The bus is operated by a crew of 10 people, supplied by SIS LIVE, and can accommodate up to 20 other personnel, including the director, talent and guests, with up to 8 people appearing onscreen simultaneously. The vehicle is equipped with 9 onboard HD cameras including 5 miniature remote controlled heads and a roving wireless camera transmitting via MPEG4 radio link.

This project demonstrates the end-to-end service which SIS LIVE offers, including everything from system design, build and integration of technology, right through to operation of the finished studio and transmission of the final programme.

This impressive technology is currently igniting media interest, with interviews already conducted with the French press.

About SIS
SIS is one of the world’s leading companies in the television broadcasting industry. It is the foremost supplier of television programming and data services to the UK and Ireland betting industry. The company’s broadcast business, SIS LIVE, operates the largest satellite uplink fleet in Europe and is the largest outside broadcast provider in the UK. SIS LIVE offers a complete broadcasting solution including global distribution, satellite internet and IP provision, special camera systems, wireless camera solutions and broadcast systems integration services. SIS LIVE also designs and manufactures an innovative, market-leading range of satellite and broadcast products. The company covers over 100,000 hours of live events worldwide each year and delivers approximately 80% of live news feeds across the UK.  Credits include the America’s Cup, Formula One, Wimbledon Championships, Glastonbury Festival and European Tour Golf.