“When it comes to flexibility and performance, there is no comparison to SHOTOVER systems,” said Manel Arroyo, Managing Director at Dorna Sports. “They have truly changed the game in aerial filming by creating a system that is future proof, allowing us to utilize the most sophisticated range of broadcast cameras and new exciting technology as it comes to market. The partnership with SHOTOVER provides a perfect complement to our existing operation and will allow us to push the boundaries for years to come.”

“We are thrilled to partner with Dorna, a company known for being on the cutting edge of technology and innovation, and we look forward to supporting them in their efforts as they continue to set the bar for sports broadcasting across the globe,” said SHOTOVER CEO Brad Hurndell. 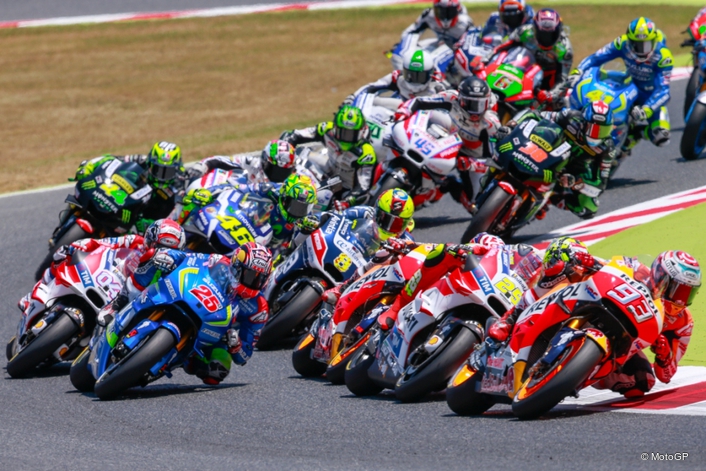 The SHOTOVER’s 6-axis stabilization technology brings a new level of convenience and agility to aerial filming, providing operators with a superior range of movement and precision control of pan, tilt, and roll when looking straight down. The system comes fully configured and set up from the factory with the customer’s camera and lens of choice, and is equipped with the SHOTOVER rain spinner, the industry’s top solution for keeping the lens clear when shooting in wet conditions. Utilizing an open platform design that can accommodate new cameras and lenses as they come to market, the SHOTOVER system purchased by Dorna has made it possible for future racing seasons to be broadcast in 4k when the global series shifts from HD to UHD.

SHOTOVER is a developer of high-performance camera systems and UAVs for the motion picture and broadcast industries.  The company’s line of gyro-stabilized camera platforms offers aerial cinematographers an unprecedented level of stability, control and versatility in a compact package easily configured for 2D, 3D and Ultra HD shooting with the world’s most advanced cameras and lenses.  Developed in partnership with the motion picture industry’s top aerial cinematographers, SHOTOVER systems are fully user upgradeable, allowing operators to utilize new professional cameras, lenses, and accessories as they come to market.