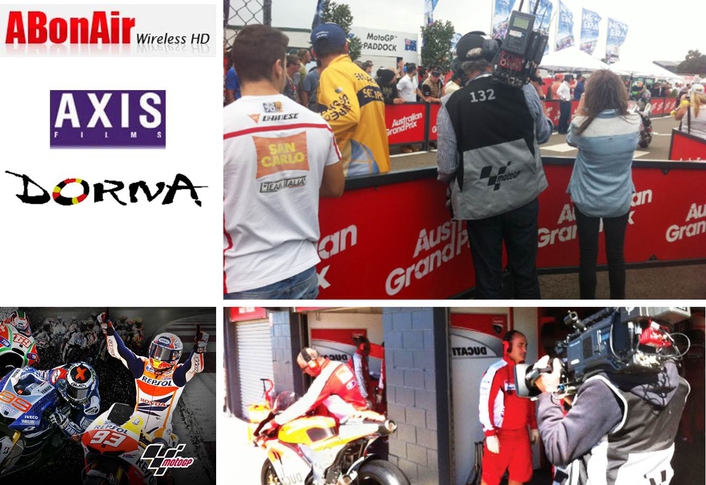 The Customer: MotoGP Racing
MotoGP is the premier motorcycle racing World Championship. In October 2013 the Tissot Australian Motorcycle Grand Prix was held in Phillip Island, Australia. Over 60,000 track visitors viewed the event on 17 super screens and 350 installed LCDs, and millions of viewers around the world watched the race via international television coverage by Dorna Sports and Network Ten.

The Application: Live Wireless Track-Wide Broadcast
During the three days of racing events, a camera and broadcast link operated in and around pit lane and on the grid prior to each race. The receive side of the link was placed on a Dorna camera tower opposite the pit lane. The race was covered live 10 hours a day, and 30  hours over the weekend.

The Challenge: A Solid Link and Reliable Coverage
MotoGP races are considered some the harshest RF environments in the sports broadcast industry due to interference from live RF cameras, telemetry from on-bike cameras, hi-powered radio microphones, team communications, fans mobile phones, and more.
Axis Films had previous experience with wireless broadcast transmissions. However, according to Tim Maloney, CEO, "For years I have had trouble renting wireless transmission systems as they all simply got blown away by the amount of RF that is associated with this sport. It was only frequency agile if there was a technician both at the camera and the receiver; we were never able to successfully navigate away from the RF problem. The environment was changing faster than we could."
To deliver reliable coverage in the overcrowded racing arena, AxisFields needed to ensure viable wireless links throughout the long broadcast. Having a camera off air was not an option.

The Solution: ABonAir AB 310 - Stable, Seamless, Simple
To deliver a stable wireless link in the tough racing environment, AxisFilms chose ABonAir's AB310, attached to a Panasonic HPX-3000 camera, including microphones. Three days before the race, AxisFilms switched the systems on and were live with a very solid picture. For thirty hours over the next three days they were on air with stable, robust and reliable link, for both live and pre-recorded coverage.

About Axis Films
Axis Films provide cinematography services and consultancy in Australia for prime-time TV shows such as "MasterChef", "So You Think You Can Dance", "Recipe to Riches", "Australian Idol" and "XFactor". Axis Films applies a broad range of broadcast solutions to venues and stadiums using specifically tailored fly away kits.