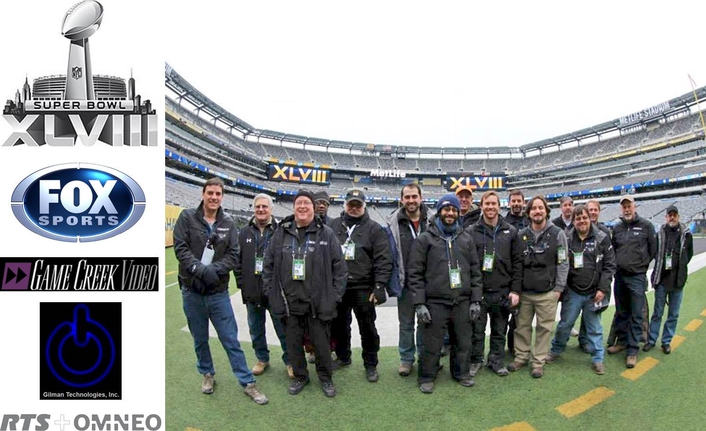 Bringing communication to the high-profile event: The highly skilled team of engineers at the Super Bowl 2014
When it comes to sheer production complexity, few live broadcasts approach the scale of the Super Bowl. The National Football League championship game is widely seen as the premier sporting event in the United States, and is closely followed in much of the rest of the world as well. 2014’s Super Bowl XLVIII was no exception. According to Nielsen Media Research, the game, carried live on Fox Sports, was watched by 111.5 million viewers in the U.S. alone, making it the most-watched program in U.S. history.

While such a high-profile event may seem like an unlikely occasion to introduce a new production technology, this year’s Super Bowl was the first large-scale remote broadcast event to utilize an intercom system incorporating OMNEO, RTS’s implementation of Audio-over-Internet Protocol (AoIP). Originally included primarily for test purposes, OMNEO not only performed flawlessly, it ended up playing a key role in enabling effective communication both within and between production locations.

While the stadium setup was itself a major undertaking, it was only one part of the overall picture. Game-related programming on Fox and Fox Sports (FS1) began days before the game and eventually ran to about 90 hours. The primary setting for this phase of production was in the heart of New York City, 10 miles from the stadium. A 12-block stretch of Broadway, including Times Square, was transformed into a Super Bowl Boulevard that featured events and activities, and Fox built a three-story set in Times Square for live programs including Fox Super Bowl Daily. To handle the Times Square productions Game Creek’s Dynasty truck was stationed at the Times Square set and Fox also took an entire floor of the nearby Millennium Broadway Hotel to build out a suite of temporary editing rooms. 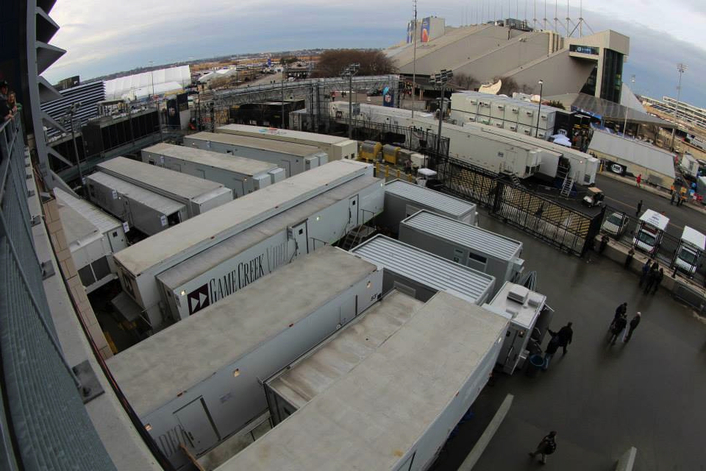 With activities occurring, sometimes simultaneously, in two separate venues, the quality and immediacy of communication became a primary concern. “The big challenge from a comms point of view was to tie all of these facilities together into one trunked intercom,” says Jason Taubman, Game Creek’s VP of design and new technology. “The goal was a comms setup that allowed anyone to talk to anyone else anywhere.”

Adding to ADAM's proven performance
It was clear from the outset that the communications system would be built on the RTS ADAM modular matrix intercom platform, the industry mainstay that is found on all of Game Creek’s trucks. “Users have to be confident that when they press a key to speak, the person on the other end can hear them,” Gilman says. “The RTS matrix system is based on a technology that guarantees a communication path for every user whether they use it or not. And under normal circumstances the circuit-mode technology at the core of RTS Matrix systems guarantees that if the audio is delivered to the core then it will make it to the destination.”

The hub of the Super Bowl comms system: The Comms Cabin at MetLife Stadium

Another key advantage of RTS in a complex deployment, Gilman adds, is its modularity. “Rather than consolidate all technologies into a central transport for system-to-system links,” he explains, “RTS allows the designer to build truly separate and redundant communication links. The regular release of new cards and key-panels allows the designer to add new technologies to the core, and that gives you the freedom to pick what makes sense in each specific scenario. You can choose from an increasingly diverse set of tailored protocols and connection types — analog, AES digital, VoIP, and now, with the release of OMNEO, AoIP.”

Based on Audinate’s Dante™, OMNEO is a high-performance professional system for routable transport of both synchronized studio-quality multichannel audio (AoIP) and Open Control Architecture (OCA) device control data. Using standard IP over Ethernet, OMNEO-enabled devices can be combined into networks of up to 10,000 nodes.

“While VoIP such as RTS’s RVON is well established for long distance transport, and is in broad use around the world, it has latency and audio quality limits that can be an issue in some real-time situations,” Gilman says. “AoIP is the high quality, low latency sibling of VoIP, and OMNEO is RTS’s AoIP implementation. It operates at latencies of less than 1.5 milliseconds, which is roughly equivalent to having a conversation with someone only a few feet away. OMNEO is very well suited for real-time environments, it allows system designers to create an intercom based entirely on IP technologies.” RTS’s OMNEO line includes the OMI ADAM matrix card, the OKI keypanel interface card, and accessories such as fiber connection adapters. 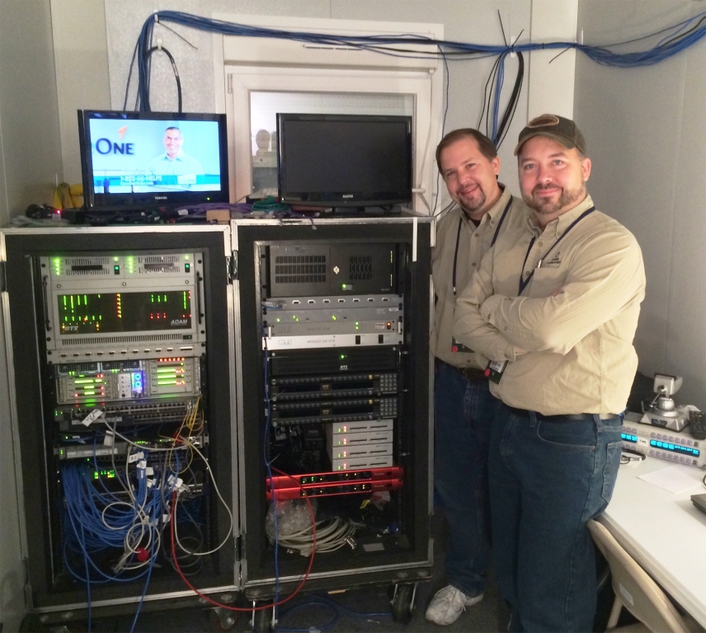 The hub of the Super Bowl comms system was the Comms Cabin at MetLife Stadium, where one full-size ADAM and one mid-size ADAM-M were merged into a single system using a TBX-Tribus fiber card. The ADAM frames were loaded with OMNEO, RVON, and MADI cards, from which connections were made to ADAM frames in the local trucks as well as to a huge array of keypanels in and around the stadium, such as the executive viewing area, green rooms, and edit/operations areas. Fox LA was connected via both RVON and TIFF, and RVON was used at Times Square for local connections within the set and to/from the facilities at the Millennial Hotel. In all the system included 680 end-points.

OMNEO's major league debut
“As far as we know,” Taubman says, “OMNEO hadn’t ever been deployed in a remote production environment before. So this was really a nice test case for us to give it a try.” But rather than relying on OMNEO for a production-critical task, the initial plan was to use Multichannel Audio Digital Interface (MADI) as the main protocol for the link between MetLife and Times Square while using OMNEO as the backup.

“Everyone was already familiar with and confident in MADI,” Gilman says, “so OMNEO was intended to be the redundant connection. But MADI does not run over Ethernet without conversion, and because of the current focus on IP connectivity it turned out to be much easier for the company handling the MetLife to Time Square connectivity to give us Layer-2 IP bandwidth, which OMNEO was quite happy with, than it was to coordinate a dark-fiber run of that distance that we could use for MADI. This demonstrates why OMNEO is likely to increasingly become the more practical choice for local-to-medium-distance connections.” 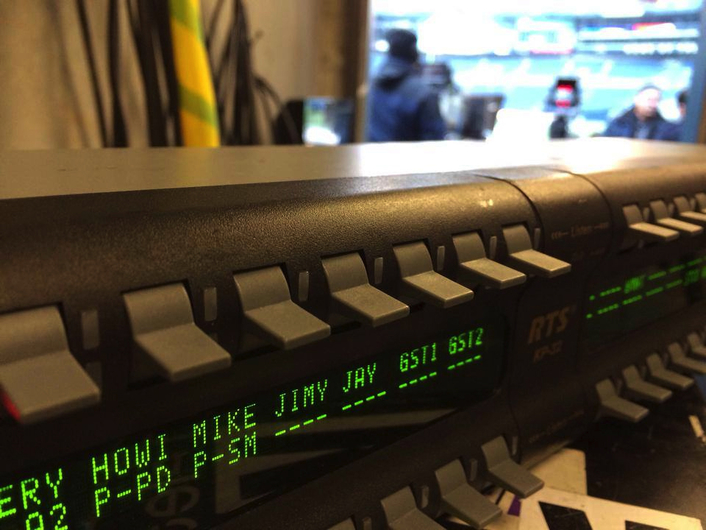 The result of the dark-fiber issue is that while MADI was used locally at MetLife, the 64 paths of trunking that linked the two production compounds together were handled exclusively by OMNEO, with RVON backup in place but not needed. “The connection from our MetLife and Times Square OMNEO networks to the fiber access point was copper Ethernet,” Gilman says. “The connectivity company took those feeds and multiplexed them into the communications portion of the fiber bridge between the sites. The result was that we had less than 1.6 milliseconds of delay over a 17 mile link. Within the MetLife compound itself we used the fiber connections available on the OMNEO cards which can theoretically achieve latencies as low as 0.15 milliseconds.”

“The quality was excellent and the latency was very low,” Taubman agrees. “For the users it was just like everyone was on one central intercom, right there in the same building. So by taking on the lead role for the connection across the river OMNEO came in and kind of saved the day.”

The ability to integrate OMNEO into an otherwise proven RTS system, thereby giving comms engineers yet another tool to deploy when needed, is in keeping with RTS’s overall view of ADAM as a heterogeneous platform that continues to advance as technology evolves, and that allows companies like Game Creek to invest in the system without worrying about future obsolescence.

“We have a legacy investment in RTS gear, it works well, and it’s well understood by all of our clients,” Taubman says. “And then we have situations like the Super Bowl, where something comes up that requires us to think outside the box, and we are able to do it with new technology that is still completely compatible with our existing system. We have a lot of tricks that we can pull from within the RTS product line, and OMNEO represents the latest cutting edge example of that. It really was the thing that enabled success on this particular project.”