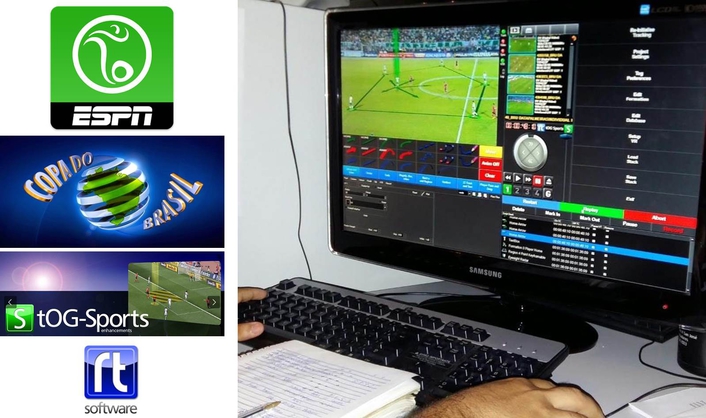 ESPN Brazil holds the rights for the Copa do Brasil, broadcasting live fixtures for audiences in the region, as well as the rights to National and State leagues’ highlights. The broadcaster recently won the live broadcast rights to the Spanish league La Liga in a new five year deal, in addition to being awarded a brand new three year deal for English Premier League exclusive rights, with coverage starting at the start of the 2016/7 season.

RT Software has developed its tOG-Sports solution for the broadcaster to deliver enhanced on screen graphics and provide more in-depth performance statistics and positional data in its coverage. The tOG-Sports system is integrated with ESPN Brazil’s OPTA data feed to power the on screen presentation graphics before, during and after channel’s football matches.

The broadcaster’s graphics licence was due for renewal last summer and ESPN Brazil sought the opportunity to look for a more innovative and cost effective solution.

Mike Fredriksen, Commercial Director, RT Software said: “ESPN Brazil wanted to continue with its popular standard telestration graphics, which have featured in its coverage for several years, and include the capability of full screen graphics showing a range of heat maps, pass maps and touch maps. This required integrating to an external data source to get the information up on the screen as quickly as possible.
“ESPN Brazil had already purchased data feed from OPTA, and we were able to provide the software to help deliver a stunning range of graphical insights.”
The OPTA data is converted from HTML into an on screen graphic – achieved using a software module from RT Software called tOG media watcher, which is capable of accepting incoming feeds such as RSS, XML.

Fredriksen explains: “The process involves the tOG-Media Watcher capturing the live feed from OPTA and converting the data to send to tOG-Sports, which in turn converts it to a graphic. This is all transparent, ESPN Brazil now has an interface built by RT Software, where they can pull up a menu and look at the stats on the current game or data from a previous game from the database. If the channel wants to show an individual player’s heat map, they can simply press a button and tOG-Sports will put the information to air. The viewer will see a full graphic with a virtual stadium in the background.”

The heat map element of the solution went live in October 2015, however another requirement from ESPN Brazil was for touch maps to plot the location of touches on the pitch, pass maps to show passes between two players and how two specific players can link up and also the routes to goal. These capabilities will go live on the channel later this month.

Fredriksen concluded: ““We developed new full screen graphics and an interface to push data to these graphics specifically for ESPN Brazil and we are delighted with the results. This installation is a perfect demonstration of how a cost effective and easy to use solution like tOG-Sports can still continue to push the boundaries of 3D telestration.”

Ricardo Spinelli, ESPN Brazil said: “We selected RTSoftware to develop a new system that could integrate with Opta Sports and allow us to have football heat maps for the teams and players. Introducing the solution has really improved our content and storytelling and enabled us to deliver new and exclusive information to our viewers. Graphics form a vital part of our coverage, it means we can display clear and comprehensive to the audience, and from a marketing perspective it really strengthens our offering and takes ESPN technology to the next level.”

RT Software is rapidly expanding its presence in both new and emerging markets across the globe, with several recent commissions in South America, Africa and Asia. ESPN Brazil is the company’s second Brazilian customer, following an earlier deal with RBS based in Porto Alegre, the main broadcaster for the Rio Grande do Sul region.

About RT Software:
RT Software is a worldwide leading provider of real time graphics solutions. The product set spans CG, template driven 2D and 3D graphic overlays, election and news room graphics, specialist sports graphics and virtual studios. From its beginnings as an off shoot of the BBC 3D graphics Department in 2004, it now has installs from Iceland to New Zealand and includes the BBC, BT Sport, Fox Sports, NBC, and many other Tier 1 broadcasters in its growing customer base