Robe partnered with leading Slovakian rental company Q-99 for the 2016 Championships to supply over 100 of the latest Robe moving lights - Squares, BMFL Blades and BMFL WashBeams, Pointes and ColorStrobes - to the event’s entertainment stage which was used for the Opening Ceremony, nightly concerts, featuring some of the most popular Czech artists, as well as for medal ceremonies throughout the prestigious and highly successful five day event.

The stage was key to the MTB World Championship action and was located near to the start and finish lines for the races. 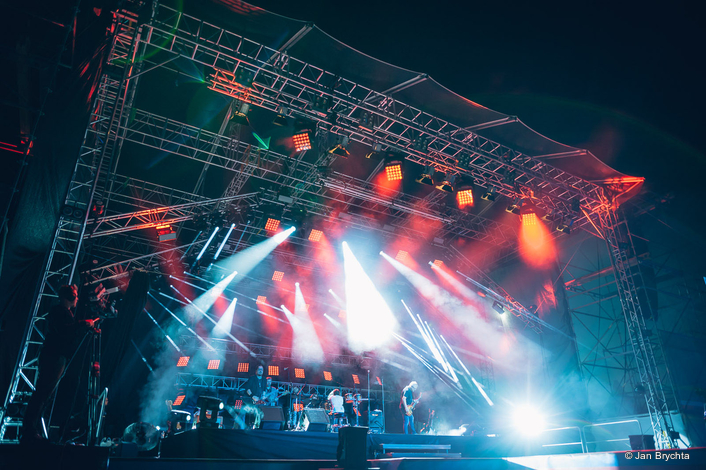 The Opening Ceremony and other highlights were broadcast by Czech national TV channels and there was extensive live internet streaming of the high-octane bike and performance action.

The stage lighting design by Michal Brna and Michal Schmidt took the bold move of not having a conventional onstage / upstage LED source ... instead, they decided to use Robe’s new Square the main ‘pixel‘ fixture and backdrop of the design.

A powerful LED matrix of 25 RGBW multi-chips, 18 x Squares were rigged to a ground support structure at the back of the stage and used to provide all the camera and eye candy, programmed into a series of mesmeric, colourful and eye-catching sequences that looked great on camera and to everyone watching live. 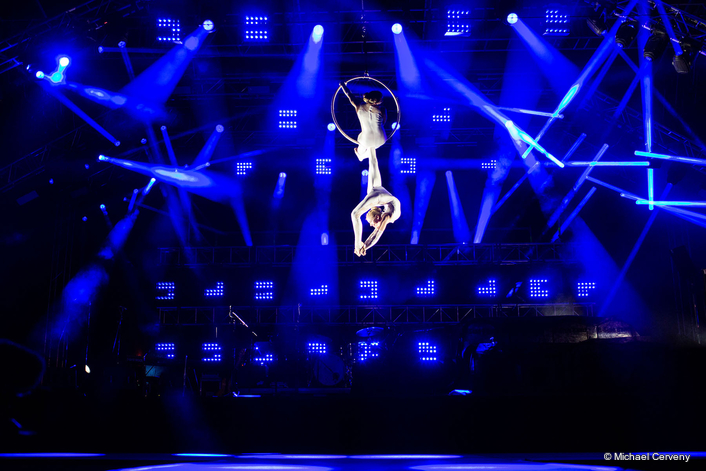 It was the first time that Michal Schmidt had worked with the versatile new Square fixtures. He didn’t use a media server or any console mapping apps, but instead ran the fixtures in ‘pixel mode’ which utilizes a range of pre-programmed pixel effects with colour, dimming and strobe chases, waves and pulses at variable speed and directions … resulting in a series of beautifully fluid moves and sequences.

This functionality of the Square is perfect for scenarios like this, where programming time was extremely tight and Michal, one of Slovakia’s top TV LDs, had to produce complex and spectacular looks … working against the clock! He also used the Squares to create base washes across the large stage area and loves the “intensity of the unit and the variety of effects”.

Another 10 x Squares were deployed on three over-stage trusses that were straight in the middle with the end-pieces angled downwards adding depth and shape to the space and maintain separation between the fixtures. The final four were rigged in the corners of the roof system. 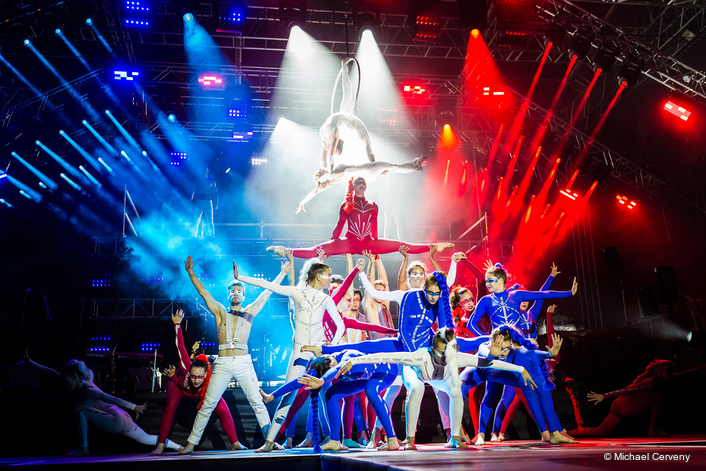 With the Opening Ceremony choreographed to produce an abstract ‘visual experience’ rather than a linear narrative, the 14 x ColorStrobes with their retina burning brightness and zone control – on the three overhead trusses - were a great compliment to augment the Squares.

BMFLs are a fixture that Michal Schmidt knows, loves and uses constantly in his work.

The framing shutters in the BMFL Blades and WashBeams were used a lot for the MTB event due to their accuracy. For the Opening Ceremony, he used the BMFL’s shutters to divide the stage up into three sections of red, white and blue – which morphed and changed with the music and dance sequences – representing the colours of the Czech flag.

Thirty-six Pointes were on three over-stage trusses. Michal rarely creates a show without Pointes. Their light weight compact size and array of effects make them ideal for any show, and on this, they looked particularly good for potent aerial effects cutting through the haze. 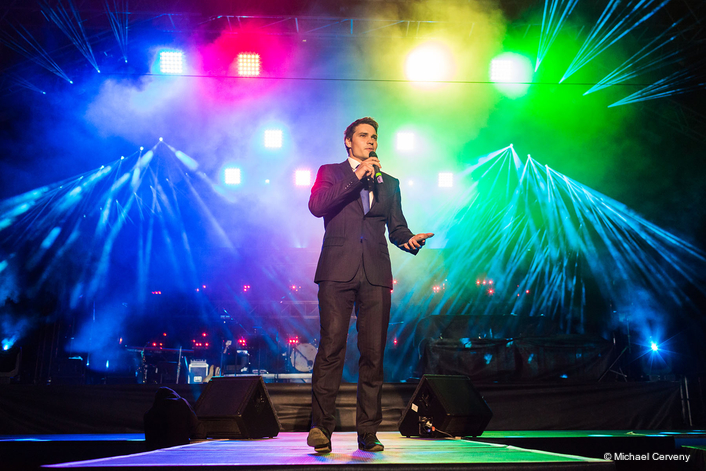 As with all these multi-artist shows, the production requirement was to ensure that everyone looked different and exciting and good live and on camera, and with experienced programming and this great line up of the latest Robe technology … every band looked their best.

For programming the band performances, the two Michal’s were joined by another programmer, Martin Nohavica.

Martin commented, “I liked working with the BMFLs, its an amazing fixture with great gobos, a huge zoom range and quality CMY colour mixing and it was great to have this cutting edge technology available during the week”. The BMFLs were his real workhorse lights for the whole week.

It was the first time he had used Squares on a lighting rig, “The effect options are very cool and I like the zone control and light output”. 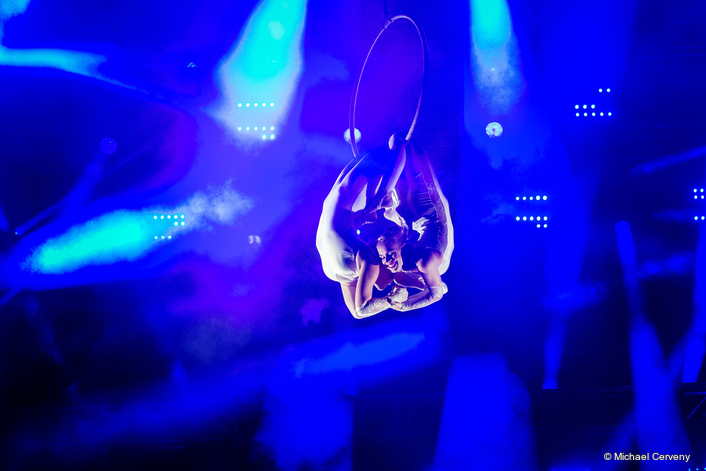 David Kurc from OteSound was the stage manager and sound designer. The overall technical production and infrastructure for the event’s entertainment elements - including stage, rigging, sound system and LED walls - was delivered by SUNINVENT headed by production managers Ales Pitrun and Michal Kubny.

The Meyer Sound PA system was supplied by OteSound, with Remak Audio from Ostrava providing the stage and power distribution and LED screens supplied by LEDVision.

The main biking event on the Sunday ended in nail-biting drama and was a real test ahead of the 2016 Rio Olympics. The winner of the Men’s Elite category was Nino Schurter from Switzerland, second was Czech Jaroslav Kulhavy and third was the legendary Frenchman, Julien Absalon … with all eyes on fourth placed Ondrej Cink a young up-and-coming Czech rider. In the Elite Women’s category, Czech rider Katerina Nash took 7th place and the Czech team won a silver medal in Thursday’s team mix relay with France taking the gold.

For Czech bikers and fans of the sport, it was an amazing and very successful championship. 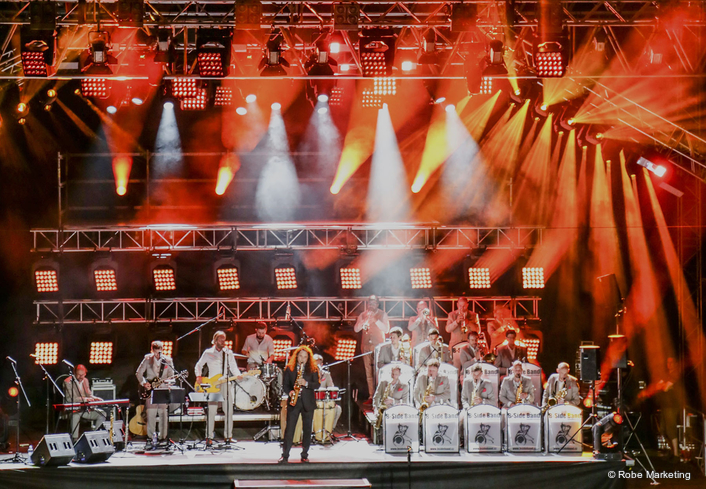 Organisers UCI - Union Cycliste Internationale - reckon this, the first in the Czech Republic - was the best World Championship in the competition’s history! They cited factors like the exceptionally high standard of overall execution, the thrilling sports performances on a popular course – the hills and woodland are perfect cross country biking terrain - the excellent fans who enthusiastically supported all competitors … and some stunning weather!

The Czech Organising Committee led by Petr Vanĕk were congratulated on a ‘copybook’ job that saw nearly 60,000 visitors flock to Nove Mesto to enjoy the thrills spills and action across the 5 days.

The competitors came from 52 countries, and for the Men’s Elite final on Sunday there were almost 25,000 viewers lining the trail in the Vysocina Arena.

THAT … is working with winners!