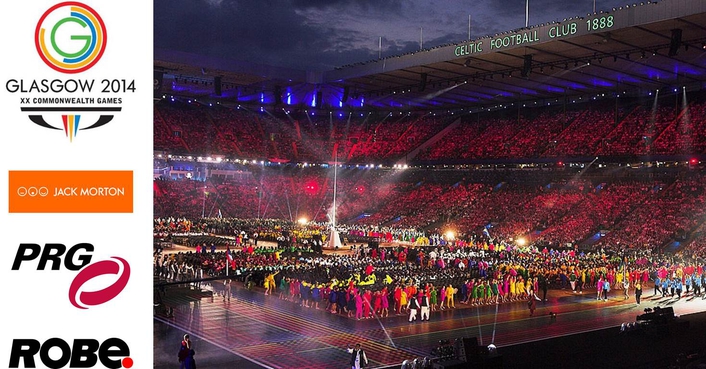 Over 500 Robe moving lights were right at the heart of the stunning Opening Ceremony lightshow designed by Tim Routledge
The two hour highly visual show, produced by global brand experience agency Jack Morton Worldwide (JMW) and directed by David Zolkwer featured a cast of 2,000 plus special guests including Rod Stewart and Susan Boyle, offering a snapshot of the history, character, culture, industry, quirkiness and innate humour of Scotland. It presented the 4500 athletes from 71 participating nations to a live audience of over 40,000 plus around two billion TV viewers.

Among the Robe fixtures were 64 of the amazing new big lights - shortly to be launched worldwide - and 28 of Robe’s new LEDBeam 1000s.

These were joined by 183 x Pointes, 100 x LEDBeam 100s, 98 x LEDWash 600s and 60 x CycFX 8s – all from Robe’s ROBIN series - which were combined with other lighting fixtures to help Routledge create one of the most spectacular Commonwealth Games OCs ever.

When Routledge – Lead Lighting Programmer for the London Olympics Ceremonies, LD for Gary Barlow, Katherine Jenkins and other high profile artists as well as a prolific TV lighting director and LD - won the pitch from JMW to design the Opening and Closing Ceremonies for the Games, to make maximum impact he actively sought to work with a quality lighting partner who could provide specific elements of the equipment package.

“Robe were extremely enthusiastic and also offered some fantastic opportunities to work with new and innovative technologies - it’s very exciting to be the first to use new products” he commented.

The challenges of staging the Opening Ceremony included working in Celtic Park, an absolutely iconic football venue, but one not normally utilised as a theatrical live event space, especially not of this size, so all departments had to think laterally to deal with weight loading and other physical restrictions … to install their equipment in the right places.

Fundamental to lighting any stadium show is making big statements. To get the coverage needed, several physical levels of lighting are required which can be layered on top of one another, and built-up or stripped away accordingly to create the necessary WOW factors in conjunction with the action onstage.

The fast paced OC show started with an all-action romp through Scottish tradition and landmarks and culminated with the hoisting of the Commonwealth flag and HRH the Queen declaring the XX Commonwealth Games open.

On the top level of the stadium at the back of the seating bowl, because there was limited weight loading in the roof, a scaffolding platform was built running 270 degrees around the stand to facilitate lighting positions, cable management, follow spots, amp ‘worlds’ and other technical areas.

This is where the big lights were positioned, furthest away from the field of play because their incredible brightness effortlessly cut through all the way to the action on the pitch and the 100 metre wide stage. 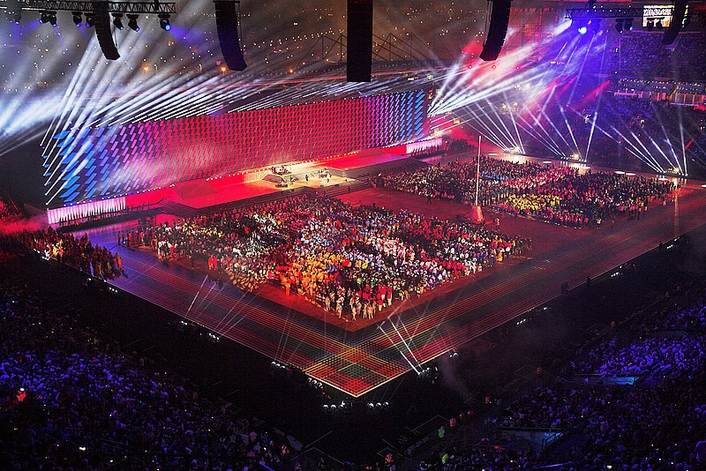 Also on this level were 96 x LEDWash 600s, primarily used for lighting the underside of the seating stand roof. On the edge of the roof – the only place any rigging points were viable - were trusses with fixtures to light the audience who were sitting at 270 degrees to the stage.

The next level down was a ring of wash lights used for show key lighting, plus 80 Solaris Flare Junior LED strobes.

At floor level, Routledge used the majority of his Pointes.

Pointes in clusters of six in weather domes were positioned around the perimeter of the field in 16 ‘floor pod’ positions, and these provided most of the low level eye candy.

These 96 Pointes were used to shoot across the brightly coloured floor cloth and for firing up into the air and criss-crossing the pitch, creating super-bright matrix effects and also skimming the floor with gobos and texturing. They could also be turned around and beamed up into the stand roof for gobo effects, complementing the LEDWashes.

“As always, the Pointes were hugely versatile and worked very hard” comments Routledge.

Also in each of the pitch-level lighting pods were Source Four 10 degrees, Source Four PARs and a bar of ACLs.

At the back of the stage which ran along the entirety of the South stand at Celtic Park was a 95 metre wide by 10.5 high LED screen, with another 40 Pointes alternated around this, rigged to a goal-post style truss structure. These could be used for illuminating the field-of-play action as well as for animated beam effects and specials like ‘crowning’ the Commonwealth flag when it reached the top of the mast.

The flag itself had eight specially dedicated LEDBeam 1000s positioned around the base to highlight it as a core symbol of Commonwealth unity. 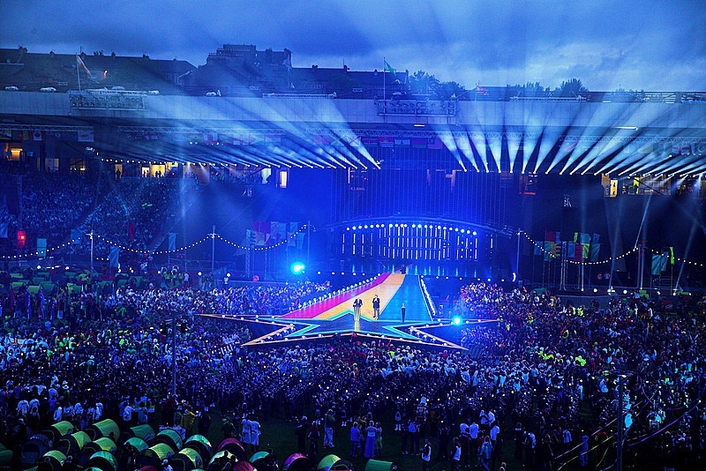 At one metre intervals running along the front of the stage were the 100 LEDBeam 100s. Their tiny size was ideal for being neat and unobtrusive on camera and their cheekily bright output made a great impression with multiple beam looks and sweeps across the stage and the pitch.

Twenty of the LEDBeam 1000s were positioned in a semi-circle behind The Queen’s Arrival Stage on the west side of the pitch. They back-lit a temporary white screen erected behind The Queen for her arrival moment, creating a shimmering diffused glow to complement the soft spotlight-key lighting.

The Queen then returned to her vehicle to be driven off the pitch and make her way up to the Royal Box, the screen was removed and the LEDBeam 1000s formed a powerful nucleus for aerial looks firing upwards from that end of the pitch.

Sixty of Robe’s CycFX 8 moving LED battens were strategically rigged around in Vom 2, the main entrance for the Athlete’s Parade into the stadium. These were used for vibrant, lively chases and effects that boosted the vibe and excitement in the moments immediately before the athletes walked out to be greeted by a tumultuous Scottish welcome.

Immediately above each of the two entrance / exit voms were ten Pointes and six LEDWash 600s.

Chris Henry was the Design Associate for the project. She also trained 18 volunteer operators to use the follow spots … and called them during the show. 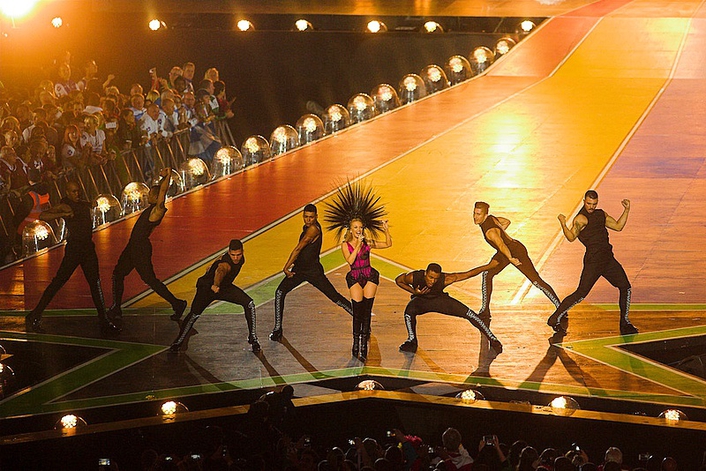 PRG’s very efficient crew of seven led by Rich Gorrod looked after all the lighting equipment, and Robe’s own Steve Eastham was also onsite to assist with tech’ing all the Robe kit.

“A huge amount of collaboration made this all happen” says Routledge in conclusion, following the successful delivery of a dynamic and much acclaimed OC.

“We really had to ‘box clever’ with this project and maximise the ‘bang-for-buck’ on each and every cue – from using hundreds of generic fixtures to cross-light the field of play to using the latest in Robe technology – every light was considered and placed accordingly so it could offer maximum benefit to the show.

“Robe products have been increasingly prevalent in my designs over the last two years and with Robe’s enthusiasm and service on this project alone, I feel that their fixtures will be at the centre of my design processes for some time”.

After the OC, all the production was stripped out of Celtic Park and re-rigged by the team in Hampden Park stadium in the south of the city for the Closing Ceremony, starring Kylie Minogue. 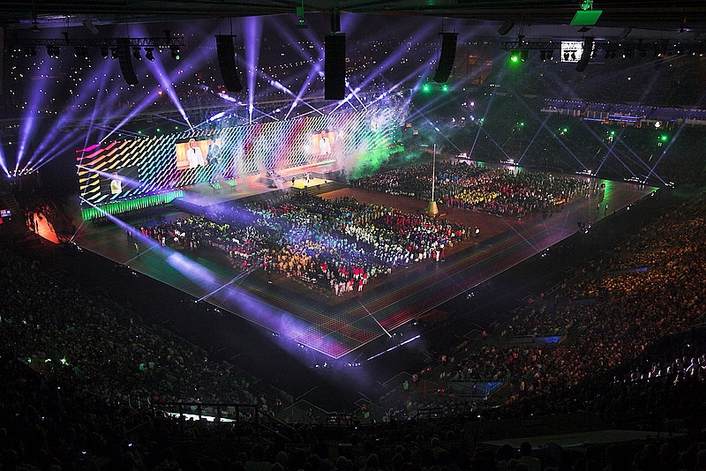 The time pressure was intense with one day for the get-in and straight into the show - in true rock ‘n’ roll style - to celebrated the ending of Scotland’ largest ever cultural and sporting event, and what is reckoned to be the best Commonwealth Games to date … in awesome style!