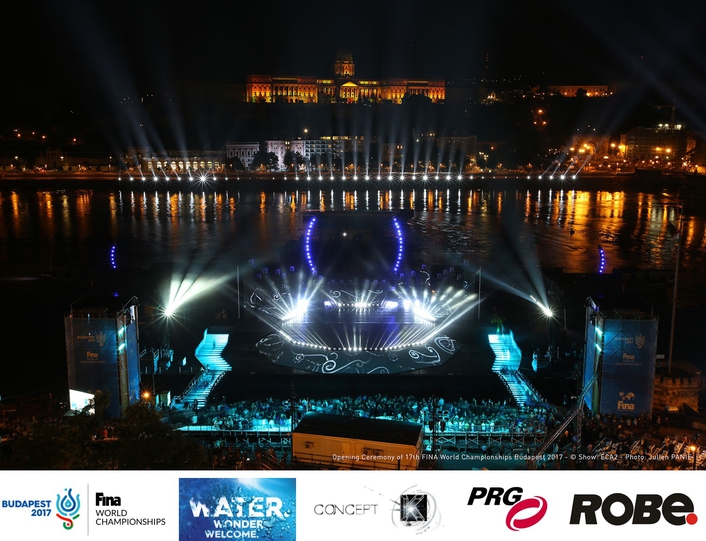 Lighting designer Frédéric “Aldo” Fayard from Concept K in Paris specified over 400 moving lights for the event, 80 per cent of which were Robes

He was brought on-board by French event production company ECA2 who co-ordinated all the technical production. The event included a host of other visual elements like large format projections, mapped buildings, water fountains and fireworks.

A cast of several hundred performed during the two hour show, broadcast live on national TV, on the M4 Sport channel (Directed by Andras Kakatos) and streamed on CNN Create, from a special stage floating on the river Danube in the heart of downtown Budapest. The stunning location was beside the city’s iconic chain bridge and overlooked by the massive Baroque palace of Buda Castle.

It was a challenging brief for Aldo to light in every aspect. The stage was 40 metres wide and occupied around 1200 square metres of space and as well as filling that and covering the large cast, he also needed to be able to shoot light down the Chain Bridge on stage left / house right, which was over 150 metres long and throw a wash onto the left bank of the river 300 metres away, which included some substantial audience viewing areas.

That was not all, there were enormous dancing fountains which had to be lit and Buda Castle – a good 600 metres away on top of the opposite hill, south of the main site, also had to be covered.

The stage was completely open and much of the lighting was rigged on two enormous side portals, custom built on site by Belgian engineering specialist WIcreations. Lights were also placed all around the floor and along the front of the stage and lined up on both sides of the river bank. 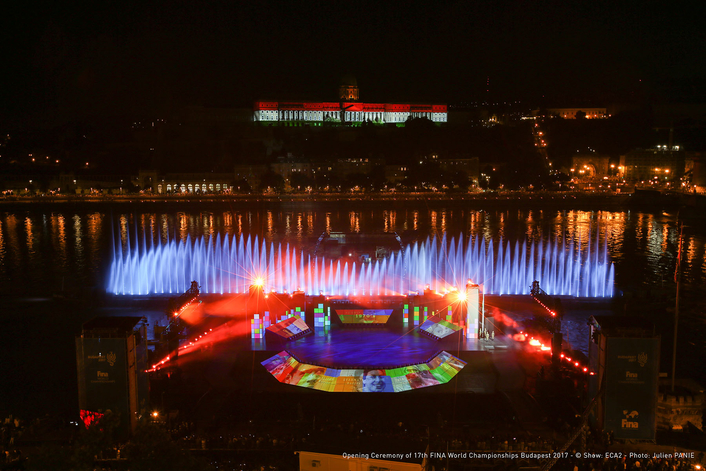 Extensive video projections illuminated the multi-level stage and in the early production meetings, it soon became obvious that much of the stage lighting would need to be tightly focused to keep clear of the projection elements which were a key part of the overall aesthetic.

This prompted the choice of BMFL Blades, which Aldo also used for near-field lighting positions up at the castle – with 34 units approximately 20 to 40 metres away from the building. Buda Castle had its full 300 metre plus facade highlighted throughout most of the show either with mapped video or lighting.

“BMFL Blades were the only fixture that had the intensity, zoom range and the necessary shuttering to work in this situation,” explained Aldo.

There were times when the video mapped sections of the castle were supported by lighting and others where the whole building was lit purely with lights. Either way, it both architecturally and metaphorically was an integral part of the show narrative and the overall OC ‘picture’, making compelling long-range camera shots.

It was only once they were on site during the technical period that Aldo really realised the full long-super throw potential of the BMF Spots, specifically with 18 units positioned on 18 x LED-clad towers at the back of the stage. 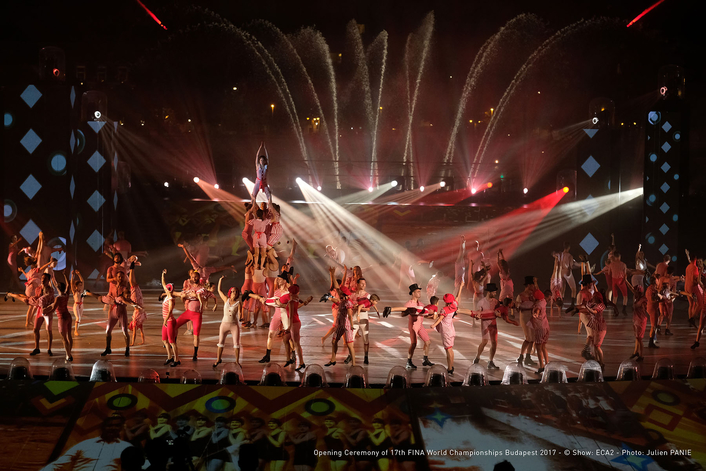 These were ideally placed to be turned around and pointed to hit the Castle with a base layer of white lumens … 600 metres away! The near-field BMFL lighting looks could then be layered on top even more efficiently. It was like having an ‘undercoat’ of light.

In fact, reports Aldo, they even lit Matthias Church, another fine building and landmark of the city, situated approximately 1000 metres away on top of the Buda Castle Hill, which helped provided the unique and jaw-dropping panorama behind the bridge that looked so spectacular on the wide TV shots.

Aldo knew that BMFLs were bright, but even he was surprised at the effects they could have on buildings THAT far away “It is really incredible!”

“The two features that were most important in this context were the sheer power of the fixture and the intensity and quality of the narrow beam – and the BMFLs delivered this absolutely,” he stated.

One side of the bridge was lit with 12 x BMFL Blades positioned on the opposite bank of the river and from the other side with 12 more located behind the back of the stage.

The balance of the BMFL Blades was positioned in the front and to the sides of the stage to provide the punch and the necessary direction for performers. The shutters were used to avoid any light-spill onto the video projection areas.

The 72 Pointes were sited all around the stage to texture and decorate the floor or to create striking aerial effects.

Meanwhile the Spiiders were positioned on the floor of the stage and on barges moored in the river, forming a second perimeter, effectively framing the stage and décor. 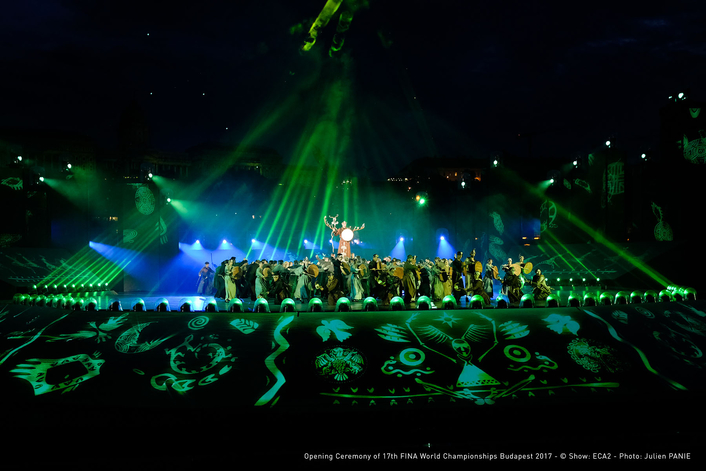 Aldo chose Spiiders for this task because of its powerful wash and beam and rich deep colours. The small size also meant the units could blend into the background and remain unobtrusive.

The stage itself was built up-river in a shipyard and towed into place in two sections by four barges.

When moored, a 40 metre barge immediately behind provided additional lighting positions for more BMFLs to light the 140 metre wide line of water fountains that were 30 metres behind the stage. These were secured on two more 80 metre barges. 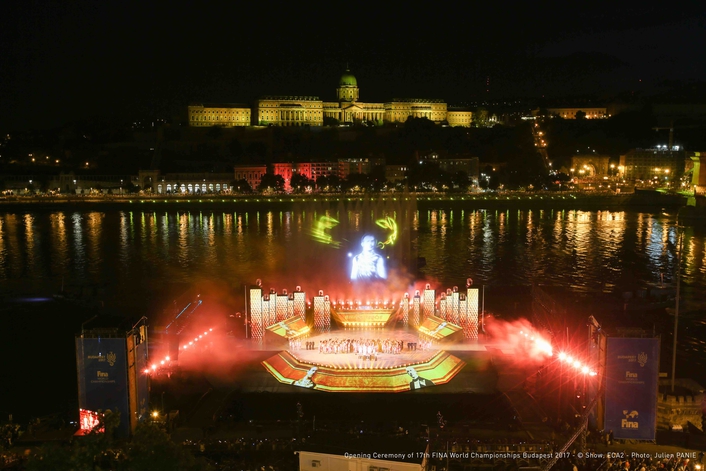 The challenges of lighting this show were firstly covering the vast size of the site – equivalent to around 20 stadiums taking into account all the different elements and geographical hot-spots - with 400 lights, which is more like the amount you would spec to light one stadium  … if being conservative!

So it was really fundamental to the success of this expedient spec … to have the right lights in the right places!

With up to 200 people onstage at a time, the second exacting task, creatively, was getting enough lights onto the stage without any of them spilling onto the projection surfaces.

The third challenge was producing a complex and sophisticated show in a short timeframe. Aldo did as much WYSIWYG’ing as possible and also worked on the pre-vis with water feature specialists from the Crystal Group, who designed and supplied the amazing fountain systems, which were lit so beautifully.

To ensure this show had all the IT resources needed to plan and prepare, Concept K set up a special studio in their Paris HQ and Aldo and his programming team of Johan Chabal and Nicolas Galloux spent two intensive weeks getting the building blocks into the grandMA2 consoles on which they ran the show.

During this time they were in inconstant contact with others on the creative team including fountain programmer James Thomson, who also used a grandMA 2 to control the complex choreography of the water jets.

This allowed them to arrive on site just 12 days ahead of the show well prepared, as the final high pressure technical and rehearsal period began.

Aldo and the team also worked closely with Laurent Boillot and Antoine d’Halluin, project managers for PRG France, which supplied all the event’s technical production, including lighting. 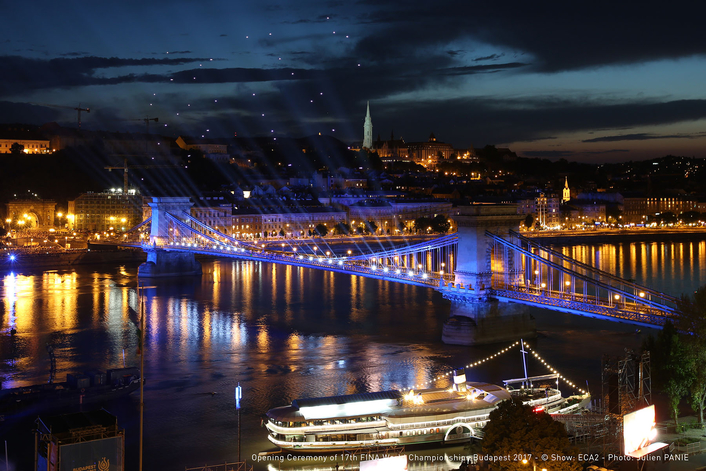 Aldo comments, “There are not many production companies able to plan and execute a project of this size and complexity within less than 6 months. The ECA2 Team directed by Jean-Christophe Canizares took up the challenge and worked intensively, tirelessly and with incredible passion, led by technical director Guillaume Duflot and project manager Catherine Le Brun.

“It was a great pleasure to be part of this team and to help pull off this exacting goal and I want to thank them for the opportunity to realize this ambitious job in these galvanising conditions”.

He adds … with a cheeky smile “Maybe it's a part of the French touch!”