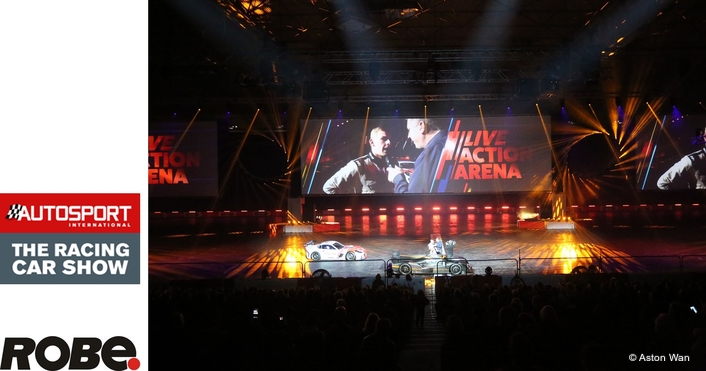 Lighting designer Nathan Wan returned to the Live Action Arena at the 2018 Autosport show. Having torn up the circuit last year with a totally new look lighting design and a fresh creative team on-board, this year’s challenge was to make Hall 5 of the National Exhibition Centre (NEC) in Birmingham even more visually exciting for 50 minutes of hell-raising basic-to-bonkers performance car races.

Network’s Nick Halliday looked after the Live Arena’s technical direction and management aspects, with Dave Beel as production manager. “We enjoy a great rapport and are all really into motorsport as well which works to everyone’s advantage,” explained Nathan. 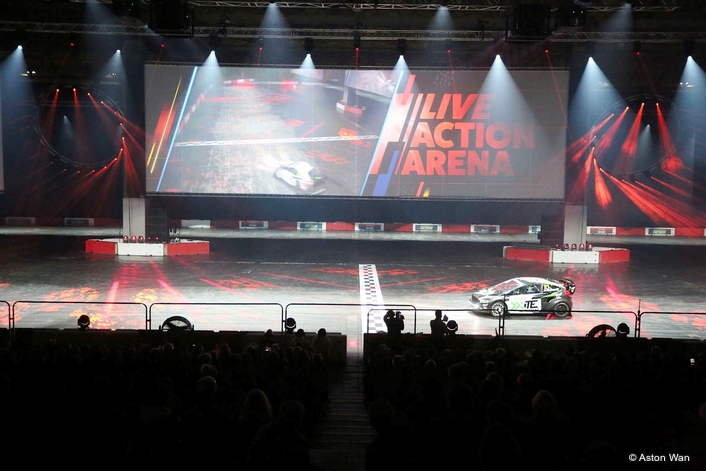 The Live Action Arena - a vast and noisy void of revving engines, burning rubber, screeching brakes and spluttering exhausts - is one of the most challenging environments to light with a voracious appetite for Lumens.

Nathan introduced the power of Robe BMFLs into the mix last year for the first time, which made a massive difference to the dynamics he could create with the rig.

Apart from getting enough brightness in there, other parameters to consider include not blinding drivers as they belt round the short track at supernatural speeds, so fixture placement was crucial. 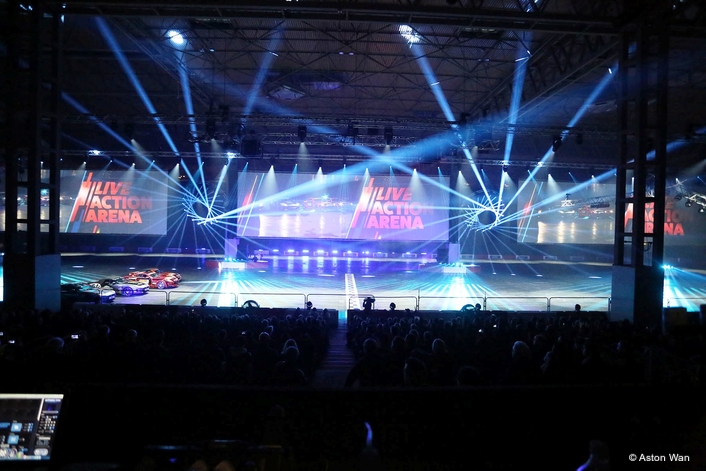 In the centre of the arena facing the 5000 capacity seating tribune were three large LED screens, and to get some more lighting architecture into this area, the design included two 6 metre diameter circles of truss, hung vertically either side of the centre screen facing the audience.

Each of these was populated with 20 x Robe MegaPointes which provided two high impact blocks of effects lighting at Nathan’s fingertips, capable of reaching along and across the 150 metre long by 40 metre wide arena / track.

A series of long trusses in the roof were trimmed at about 9 metres, and these were rigged with 88 x BMFL Spots, 40 x Pointes and 36 x LEDWash 600s.

Thirty-six Spiider LED wash beams were rigged on top of six 5 metre high scenic L-shaped Singapore F1 night-race style gantries that reached 9 metres over the track. These were introduced last year for the first time and were a big hit with everyone when Nathan rigged them with LEDBeam 100s. This year he wanted a totally different lighting effect from this lower angle, and so chose the Spiiders, with six per gantry. 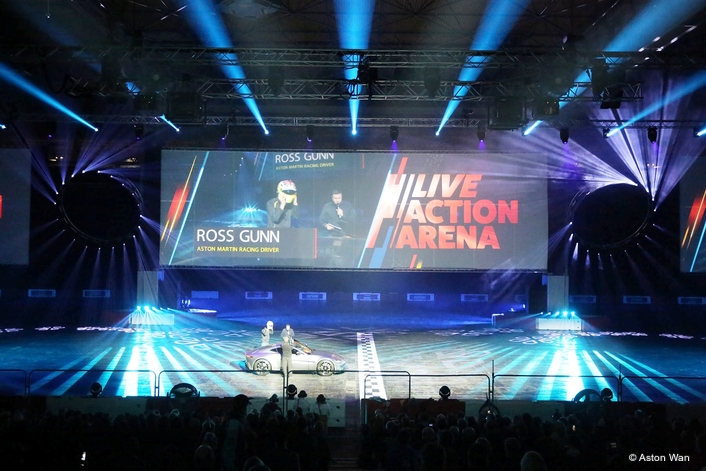 A major reason for using Spiiders in this position was to introduce some more kinetic video-styles and shaped effects that capitalized on the map-ability of the fixtures.

“I was keen to bring a new visual dimension to the show,” explained Nathan.  “It’s in a very similar setting each year, so it’s important to keep that evolving and changing as many people return year after year. They all enjoy the thrill of the race, the action and the exhilaration of high octane driving ... and so I want to make sure they get an equally stimulating lightshow!”

Nathan utilized a combination of custom and library video content which was run via ArKaos MediaMaster software to the Spiiders, triggered from his lighting console.

Four of the BMFL Spots – positioned above the FOH position - were used as follow spots – remotely controlled by Nathan via his Avolites Tiger Touch II console, which were great for illuminating the presenter David Croft and guests coming onto the track for interviews. 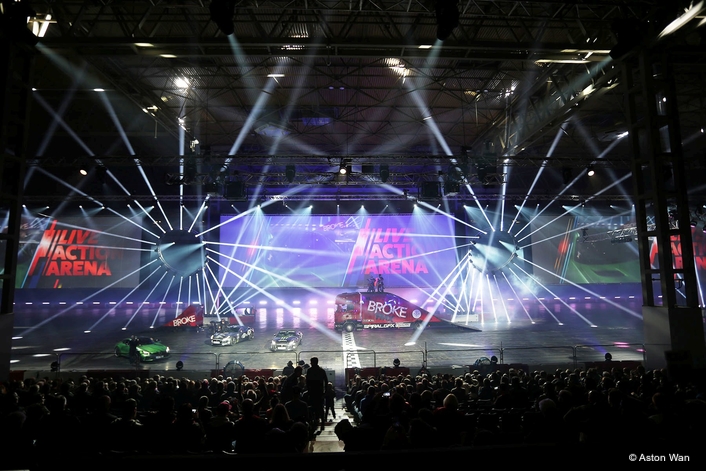 The BMFLs were used generally as track lighting for the races, and for texturing and adding colour and depth cross the arena in between races and during the interview sections.

The Pointes were deployed for what they do best, making lots of spectacular specials and co-ordinated beam-work as well as to augment some of the cheekily impressive MegaPointe looks.

With six tightly choreographed shows a day and 30 minute pit-stops between each one, reliability of the kit is a major concern – there’s no time for taking kit on and off the rig - and another reason that Nathan is always happy to work with Robe lights.

He and his team also don’t know what the show will be like before they get to site and the lights are rigged and in position, so an amount of contingency has to be inherent in the design. “It needs to be versatile, and I need to be able to get light – quickly – everywhere, sometimes at a moment’s notice!”

For atmosphere, he used MDG theONEs … about the only fog machine that’s anything like effective in the barn-like space. 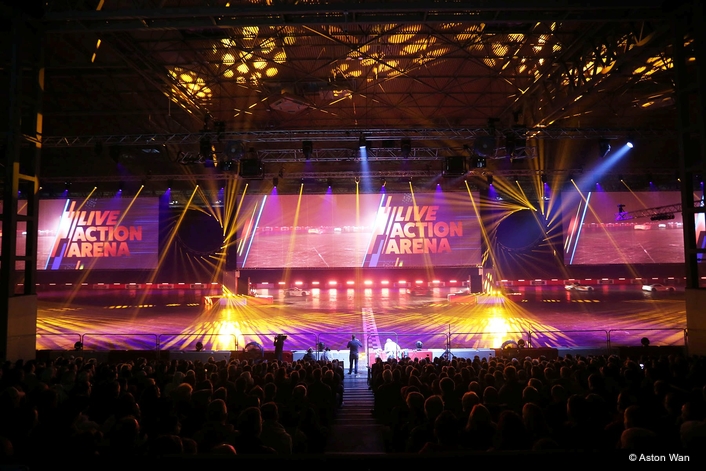 He programmed and ran the show on two Avo TigerTouch II desks plus lots of network processing, with the ArKaos MediaMaster on a laptop running video to the Spiiders plus 70 metres of LED batten placed around the track’s concrete safety wall.

Design-wise, the hardest elements is to light everywhere without there being a specific centre stage, and also, with such a long lengthwise dimension, make the show look totally different at any one time depending on where people are sitting … however they need to be constantly swept up in all the energy and excitement wherever that may be!

This year’s action included stunt legend Terry Grant and Mission Motorsport who were joined by Billy Monger as a star team member impressing fans in a fleet of specially adapted Jaguar F-types. Mission Motorsport is a not-for-profit organization dedicated to assisting the recovery and rehabilitation of those affected by military operations through opportunities in Motorsport.