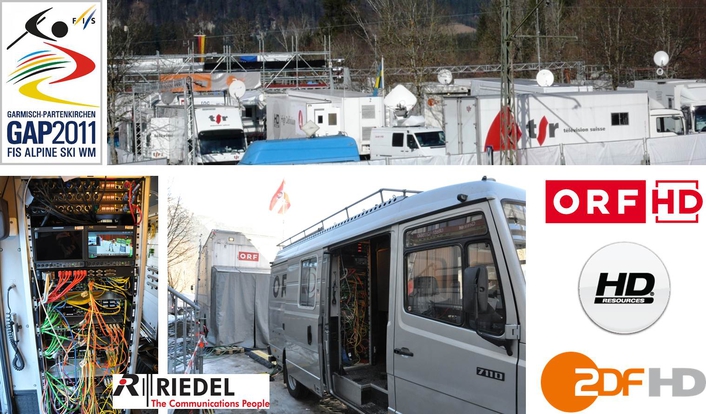 Besides the extensive MediorNet installation the communications infrastructure of the opening ceremony was also based on Riedel
The broadcasters ORF, ZDF and HD Resources used extensive Riedel MediorNet systems for distributing the signal at the Alpine Ski World Cup in Garmisch-Partenkirchen. A total of 29 mainframes were installed for integrating the OB truck with the venues Kandahar and Gudiberg, the Medal Plaza as well as the IBC and the TOC of the host broadcaster.

The Austrian public broadcaster ORF used a comprehensive MediorNet installation for integrating the different positions such as the commentary booths, the Medal Plaza, the TOC or the OB truck into one single network. Furthermore, the signals from various cameras between the ORF studios, the finish area, the OB truck and the IBC were distributed over the MediorNet network. In addition, MediorNet transported the broadcast feed between the different venues and the studios.

„With the long distances between the venues, we knew, we needed to install a fiber based system. Compared to regular point-to-point solutions MediorNet's technology was superior in terms of network applications. Due to the high number of connections we had with this installation, we already realized in our planning phase, how powerful MediorNet is,“ said Wolfgang Meier Direction Production at ORF.

The German public broadcaster ZDF used a total of eight MediorNet mainframes at the Ski World Cup for routing the German broadcast feed between the IBC and the OB truck. Furthermore, ZDF integrated various Artist control panels via MediorNet into the fiber network. MediorNet's comprehensive synchronization-feature allowed for the generation and distribution of the sync signals for the ZDF installation.

With the help of MediorNet's integrated Embedder/De-Embedder the commentator's audio and the ambient microphones was embedded into the video feed. The audio was de-embedded at the destination and routed to the OB truck as a regular MADI signal. Furthermore, MediorNet distributed the gigabit data connections for the editors.

The Swedish broadcast provider HD Resources used a MediorNet installation for distributing the video signals as well as the control data for the camera's CCU. This also enabled the integration of the camera's 4-wire communications. A Riedel RockNet digital audio network installation was integrated into the MediorNet system via MediorNet's RockNet media card.

Besides the extensive MediorNet installation the communications infrastructure of the opening ceremony was also based on Riedel technology combining Artist digital matrix intercom, Performer digital partyline and digital TETRA radio into one single system.