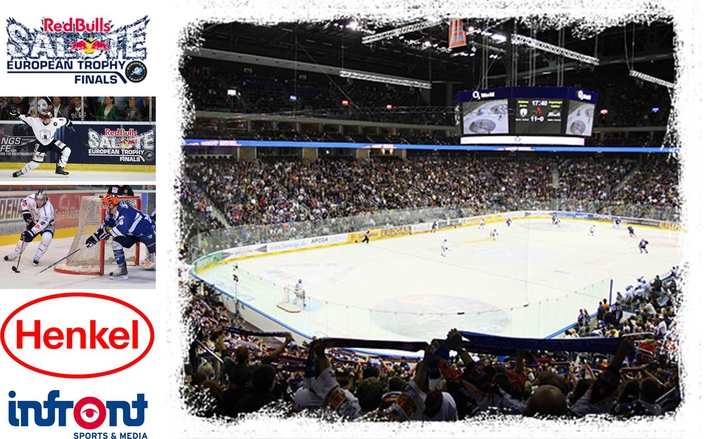 European Trophy Finals to be broadcast live in Central Europe, Scandinavia and the United States
Infront secures significant levels of free-TV coverage along with a central sponsorship agreement for Henkel

Fans across key ice hockey markets in Central and Northern Europe as well as the United States will be able to follow the Red Bulls Salute – European Trophy Finals live on television. The international sports marketing company Infront Sports & Media, acting as the event’s media and marketing partner, has secured a significant amount of free-TV coverage. Overall, the Red Bulls Salute – European Trophy Finals, taking place in Vienna (Austria) and Bratislava (Slovakia) from 13 to 16 December 2012, will be broadcast in more than 30 countries.

The Red Bulls Salute is the final tournament of the European Trophy which in 2012 saw 32 teams from seven European nations compete for the final of the club-level European tournament in ice hockey. The quarter finals start this Thursday and feature the following teams: Luleå Hockey (SWE), Brynäs IF Gävle (SWE), HV71 Jönköping (SWE), Tappara Tampere (FIN), UPC Vienna Capitals (AUT), Eisbären Berlin (GER), HC Slovan Bratislava (SVK) and Färjestad BK Karlstad (SWE). The winner will be played out in the final game to take place in Bratislava on Sunday.

High pan-European and US broadcast distribution
For the first time ever, Infront managed to bring the Red Bulls Salute to the United States, with ESPN broadcasting live. In addition, coverage will be provided in Sweden, Norway and Denmark (Viasat), Finland (MTV3), the Czech Republic (Nova Sport), Slovakia (TV Markiza/Nova Sport), Switzerland (SSF) as well as in Austria and Germany (Servus TV). Additionally, an agreement for international news coverage has been sealed with SNTV.

Henkel expands ice hockey portfolio
On the marketing side, a central sponsorship opportunity for the emerging competition has been taken over by Henkel with its brand “Ceresit” (adhesives). As a Premium Sponsor, the brand will receive a comprehensive presence across the Red Bulls Salute. Furthermore, Henkel branding has been integrated on all print and online promotional material.

Bruno Marty, Infront’s Executive Director Winter Sports, said: “The level of international media coverage achieved for an emerging competition like the Red Bulls Salute reflects the strong fan interest and future potential of international club ice hockey. It also illustrates the boost a cross-national competition - not only on national team, but also on club level - can provide for the sport.  Infront is eager to contribute its expertise and network in order to build upon these promising sportive and commercial foundation in the future.”