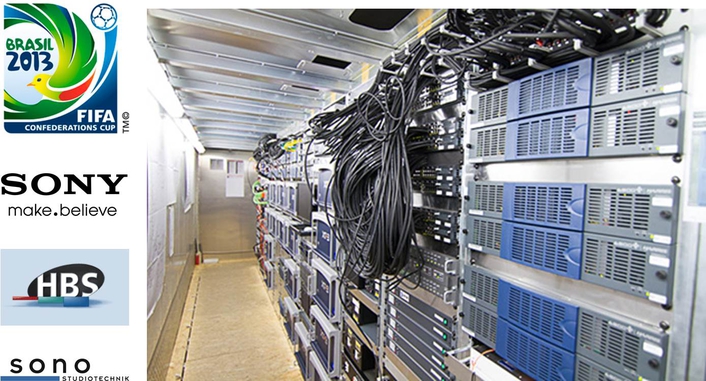 Inside the ERC in Belo Horizonte
The FIFA Confederations Cup Brazil 2013 came to an end, allowing all involved parties to take a slight breather to reflect on the lessons gathered so far, whether successes or potential areas of improvement. On the HBS side, one of the definite successes is a new — and vitally important — engineering concept: the pre-commisioned Equipment Room Container (ERC), which was tested in situ at the International Broadcast Coordination Centre (IBCC) in Belo Horizonte.

At previous FIFA events, HBS' Broadcast Compound at each venue included an Equipment Room that was the beating heart of onsite broadcast operations, connecting to all operational rooms (Multifeeds Production, Technical Operations Centre, Audio Control Room, etc.). The Equipment Rooms for the 2010 FIFA World Cup South Africa™ were re-assembled, tested, and troubleshot onsite over a period of 3 weeks at each venue. The process worked very smoothly, but required long periods of time onsite, periods that the ERC was designed to do away with.

Following a two-month design and detailed planning period, the various components of the Equipment Room Container were commissioned from top-shelf providers to HBS Engineering's specs and assembled at the system integrators' premises in Germany. The literal thousands of cables (coax, ethernet, audio, etc.) used for the ERC were tested and plugged in at both ends to the actual FIFA Confederations Cup equipment to be used at each venue. Once testing was complete the cables were unplugged from the operational room equipment but left connected to the ERC; the cables were then rolled up, the ERC was locked down and the plug-and-play container was shipped off by boat across the Atlantic Ocean. A system of shock-dampening coils installed under the unit's flooring helped deal with any jostling in transit and a healthy amount of salt atop the container allowed for humidity extraction.

The Equipment Room Container is a freestanding unit, independent of the "HBS House" comprising most of the Broadcast Compound in Belo Horizonte and at each venue. Upon arrival deposited at the appropriate spot, the cables were unrolled and reconnected to the equipment in the various operational rooms and the venue was essentially active. A system of airlocks and controlled airflow facilitates temperature and humidity control and deals with the potentially significant differences in both of these aspects from one venue to another. 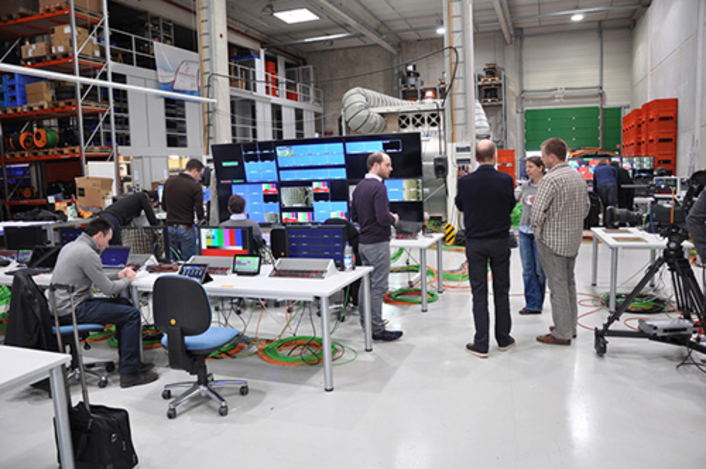 The result of all this has been nothing less than spectacular. All equipment has performed exactly the way it was designed to, thereby confirming the validity of the project itself and leading HBS to sign off on its widespread implementation next year. The container used at the Belo Horizonte IBCC will be used as a back-up unit for the 2014 FIFA World Cup™ and 12 new containers will be built, one for each of the venues.

Senior Engineering Manager Christian Gobbel, who was involved from the project's inception through to its implementation in Brazil, sums the whole thing up nicely: "The Equipment Room Containers are essentially very, very big OB vans without wheels, built to our exact specifications. The great thing is being able to test the equipment and the interfacing between all the components well ahead of the event, it's a huge step forward for us and a great relief in the busy days before the Opening Match.