Rain Does Not Stop Play at Queens 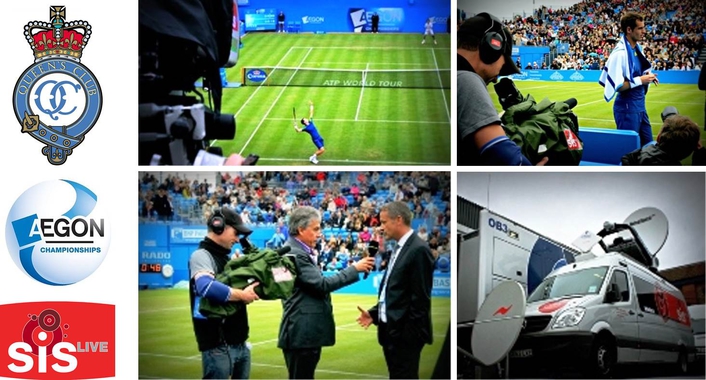 SIS LIVE Outside broadcast and uplinks from Queens Tennis 2013
The Queen’s Club Championships, now the Aegon Championships, is an annual ATP tournament for male tennis players held on grass at the Queen’s Club in West London. As one of only four grass court tournaments staged in the build-up to the Wimbledon Championships it is used by many top players to re-acclimatise to grass. It is arguably the most prestigious of the pre-Wimbledon tournaments and much of that eminence has come from the fact that the BBC, as host broadcaster, has given the tournament extensive TV coverage for the many years.

I walk into the outside broadcast compound at Queen’s Club in Baron’s Court on a grey June day in 2013. I am met by Engineering Manager John King who ushers me into SIS LIVE’s OB 3 outside broadcast vehicle, fully expanded, fired up and a veritable hive of activity. The afternoon’s transmissions are just beginning so I sit quietly in the corner of the production area trying not to disturb anyone or accidently pull out any cables. The BBC production team and SIS LIVE technical team appear to be working like a well-oiled machine, with each person somehow following the multiple conversations flying around the room and emanating from the talkback speakers, decoding instructions and pulling together to create a quality output. The inevitable British summertime rain has been falling already today causing matches to stop and start with frustrating frequency.

The BBC is host broadcaster for Queen’s Tennis, creating multiple feeds for around 8 hours each day, including international feeds for use by British Eurosport and Eurosport International. It also generates its own domestic broadcast for BBC2, BBC Red Button and online. These are broadcast daily for 5 hours and 8 hours respectively.

John King has huge experience in the technical delivery of Queen’s Tennis broadcasts. He explains to me that, as the match currently being played on centre court is somewhat less than enthralling, they are broadcasting a replay of that morning’s Hewitt v Dimitrov upset on BBC2, with the live match made available on the Red Button service. Both matches are being edited and broadcast simultaneously from within the same areas inside OB 3. This kind of ‘ambidextrous’ way of working is a frequent occurrence and one which the teams take in their stride, pushing the editorial narrative forward and giving the viewer uninterrupted coverage of the tournament despite the unavoidable breaks in play. 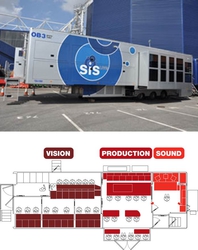 Stepping outside again I am met by George Bowler, one of SIS LIVE’s Vision Supervisors who gives me a brief tour of the rest of the vehicle. OB 3 houses the production area; two VT areas in charge of recording and replaying live and recorded material; an edit suite for creating opening/closing montages and highlights packages; a sound area with one operator working off speakers and one working off headphones to produce dual mixes; and the vision area. Here, three operators tweak the pictures to ensure they are matched and that all circuits are delivered without fault. A fourth operator acts as relief and a vision supervisor sits at the end of the row in direct view of the director. George explains how this is an important design characteristic of SIS LIVE OB trucks that helps massively with communications, particularly when working in a fast-paced environment such as that of a live sport broadcast. If there’s an issue or if the director needs confirmation a message has been received it’s far simpler to glance left to VT/Vision or right to Sound than to listen for audio confirmation over talkback units.
This year OB 3 replaces Unit 12 which is normally used and this has necessitated a certain amount of planning and preparation. Engineers George Bowler and Colin Lee had worked on the truck at base to ensure that all previous Unit 12 configurations and production preferences have been replicated, ready and waiting for the production team when they arrive on site. This preparatory work is essential to ensure that clients are able to work in familiar environments at any site.

Once the HD programmes are created it is SIS LIVE’s responsibility to deliver them to the BBC ready for broadcast on TV. The preferred transmission method for long broadcasts such as these is by terrestrial digital link to BT tower rather than by satellite. With the previously used Crystal Palace masthead no longer an option, antennae have this year been rigged on a hoist to achieve direct line of sight with BT Tower and provide a successful and cost- effective solution. Three circuits – BBC2, BBC Red Button and BBC International – are delivered in this fashion, facilitated by SIS LIVE’s Link 13 vehicle.

Stationed next to OB 3, Unit 10 is handling the creation of British Eurosport programming with a SIS LIVE uplink unit transmitting international feeds and receiving incoming feeds. The uplink vehicle has a huge 1.8m DriveForce antenna mounted on it’s roof. I’m told that SIS LIVE design, develop and manufacture their own uplink units and satellite antennae which means they are perfectly built for this kind of work and that their engineers get to know the technology from inside out.

Leaving the broadcast compound and, following John King through a warren of secret pathways and passages, I arrive at the back of the south stand overlooking the court. Covers are just being rolled back so that Murray and Mahut can resume their match. The air heavy with excitement and not a little moisture, it looks like this match will be a stop/start affair, challenging the broadcasters to plot a cohesive narrative pathway through the day’s events. Three commentary boxes, built and rigged by SIS LIVE, provide homes for Eurosport, BBC TV and BBC Radio 5Live.

In the corner of the ground sits the Presentation Studio, again built and rigged by SIS LIVE, where Sue Barker and co-hosts are taking a short break before their next link. Three of SIS LIVE’s new Sony HDC 2500 cameras are positioned to film their interviews and links, with lighting carefully positioned and obscured to prevent reflections in the glass windows behind which overlook centre court.

Action from the court itself is picked up by 10 cameras, which provide everything from high wide shots, tracking camera shots along the side lines, to close up, intimate and super slow motion views of every strike of the ball and facial expression. Multipurpose radio cameras often come onto the court for interviews and follow players behind the scenes as well as bolstering match coverage and providing ‘hot spares’ in case of failure.

Queen’s Tennis is known as one of the most enjoyable events in the calendar and one that crews look forward to working on.