Making the final available via the official public screening gives fans an opportunity to celebrate the game and experience the magic of the UEFA Champions League final, which will be watched by millions of viewers around the world.

Making the final available via the official public screening gives fans an opportunity to celebrate the game and experience the magic of the UEFA Champions League final, which will be watched by millions of viewers around the world.

Tickets are priced at €5 each, which will help cover organisational, security, and administrative expenses. Each applicant can purchase a maximum of four tickets. The capacity of the Olympiastadion will be 65,000 for the screening. The gates will open at 18.3 0CET, followed by live musical entertainment prior to the kick-off at 20.45CETT. Ticket are available to all on München Ticket’s website http://wwww.muenchennticket.de/, through the different retail stores and sales points and through the München Ticket call centre on +49 / 89 / 54 811 81 81. Wheelchair access tickets are also available in limited quantities. 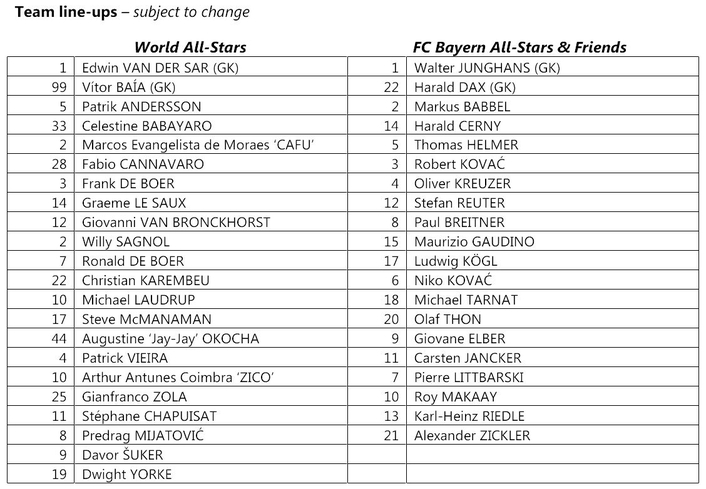 The match will be broadcast live by German broadcaster SAT. 1 with the feed made available to all host broadcaster networks upon request. UEFA.com will also take the game to a global audience via a live stream.

Highlights of the festival programme at the Olympiapark in Munich
Giorgio Marchetti, UEFFA’s Director of Competitions, said: “UEFA is proud to bring the annual UEFA Champions Festival to Munich and offer an event that gives fans and families the opportunity to celebrate football and to be in touch with the tremendous heritage of the European Cup in a fun environment with free admission for all. We hope that a record number of fans will visit the Festival in Olymmpiapark and participate in the exciting multi-event entertainment programme on offer.”

Each day of the UEFA Champions Festival will have a different theme. The proceedings will kick off on Wednesday dedicated to grassroots football, marking the 16th of May as UEFA Grassroots Day, a Europe-­wide celebration of grassroots football. The festival will also offer a stage to the 2012 UEFFA Women’s Champions League Final, which takes place at 18.00CET on Thursday 17 May in the adjacent Olympiastadion. Therefore, Thursday will feature women’s football at the festival, with Friday being devoted to futsal. Saturday’s programme will gear up visitors for the 2012 UEFFA Champions League final, which will kick off at 20.45CET at the Fußball Arena München.

Museum of Champions
Exhibits of exclusive club and player memorabilia from the great names and games of European club football bring to life the story of the European Cup.

Theatre of Champions
A unique and emotional audio-visual display of the most glorious moments in the quest for European football’s holy grail – from its beginnings in 1955 to the present day.

Partner activities
Fans of all ages can participate in numerous fun activities organised by the official UEFA Champions League partners.