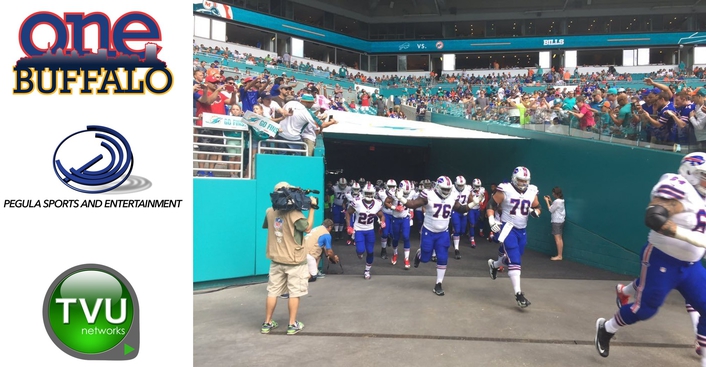 TVU Networks announces that Buffalo’s NFL Bills and NHL Sabres teams have been relying on its video transmission solutions for game coverage. Both teams are newly under the ownership of Pegula Sports and Entertainment (PSE) and part of the One Buffalo sports family. The teams now have their own production team of videographers and producers for live coverage of both home and away games. The Buffalo Bills have been using TVU Networks’ TVU One cellular 4G/LTE portable IP video transmitter and TVU receiver as part of its production package for the past few seasons, and the technology was brought forth for use at PSE.  The Sabres recently purchased a second TVU One exclusively for use during hockey season, which kicked off in October.

“We’ve been very happy with the performance of our TVU Networks equipment for Bills coverage over the past couple of seasons, so we purchased a second TVU One this year to go on the road with our Sabres production team,” said Stephen Asposto, Sr. Director of Broadcast Operations, PSE/Bills. “We’ve really benefitted from being able to have the production crew quickly shoot high-quality video with the TVU One’s one-button operation, then send footage, stand ups and highlights from away games back to our studio facilities. We then can easily incorporate the content into our final productions.”

One Buffalo’s studio facilities are at New Era Field, the Bills’ newly named home stadium in Orchard Park, N.Y.,  with connectivity to the Sabres Key Bank Center hockey arena in downtown Buffalo. Operators use the TVU One to shoot and send live video of highlight footage and pre- and post-game coverage, including press conferences, from the field back to the studio in Orchard Park. PSE also produces website content for Sabres and Bills coverage.

“We’re honored that our video transmission equipment is an integral part of the Buffalo Bills and Sabres game time productions,” said Paul Shen, CEO, TVU Networks. “With TVU One, sportscasters can fully leverage the versatility of a lightweight, IP-based video field transmitter without sacrificing performance, features or picture quality. PSE is able to provide its audiences with the best video coverage possible when relying on the TVU One.” 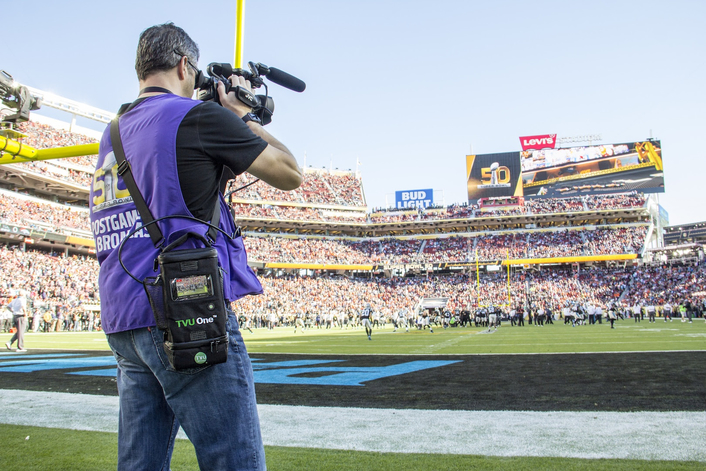 The Buffalo-area football and hockey producer just launched a new relationship with New York’s MSG Networks to create MSG WNY (Western New York). As part of the new venture, PSE has taken on new daily radio/TV simulcast broadcast responsibilities for MSG WNY, including producing the Buffalo Sabres hockey show The Instigators and the Buffalo Bills football show The John Murphy Show – which launched in the beginning of October to add to the regional MSG programming. The One Buffalo studio Bills production team also produces a weekly NFL pre-game show Bills All Access and a post-game show called Bills Tonight.

Asposto summed it up by saying, “Our team has a lot of content to produce, and our TVU Networks gear has made our jobs easier and much more efficient. We’re happy to put our TVU One equipment to good use throughout both the NFL and NHL seasons for away game coverage and remote segments to give our audiences the best in-depth coverage possible.”

Already in use by hundreds of leading broadcast organizations around the world, the TVU Networks family of IP transmission solutions gives broadcasters and organizations a powerful and reliable tool to distribute live video content to broadcast, online and mobile platforms. The TVU Networks suite of solutions has been used to deliver professional-quality live HD footage of a number of important events around the world including the World Cup, both Summer and Winter Olympic Games, U.S. presidential elections, natural disasters, the 2013 Papal conclave, the Super Bowl, the 2015 Papal visit to the United States and several international sporting events.