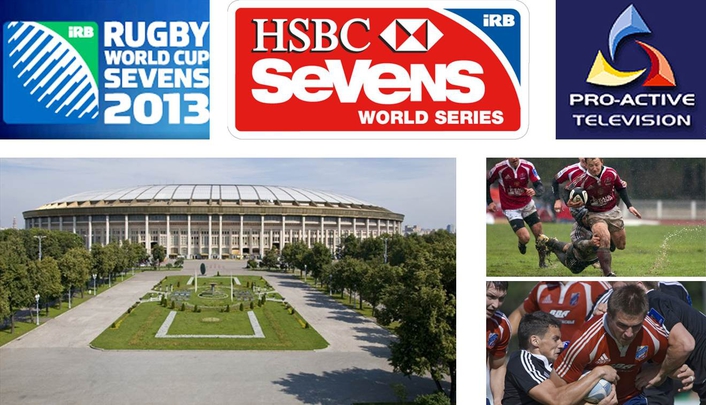 .
Pro-Active Television is pleased to announce they have been appointed by the International Rugby Board to act as television managers for one of the most prestigious events in the world rugby calendar.

The IRB Rugby World Cup Sevens will be held in Moscow in June 2013 and having generated recordbreaking coverage for the last RWC7s in Dubai in 2009, Pro-Active expect to make the Russian event the world’s most watched rugby competition outside of the Rugby World Cup itself.

This follows on the three-year appointment as television partners to the International Rugby Board for their HSBC Sevens World Series, for which they have also generated record exposure, year on year for the last seven years.

Pro-Active will represent and negotiate international television rights to the event as well as coordinate the on-site live production which looks set to be a spectacular presentation of this increasingly popular sport that is now on the path to the Olympics with its first inclusion in the Games in Rio 2016 “This is another great compliment to the work done by our team on a range of IRB rugby events but particularly the Sevens, which continues to go from strength to strength, especially now with its acceptance into the Olympics”, said Tommasina Kay, the director in charge of rugby for Pro-Active Television.

“Sevens is an amazing rugby spectacle and will guarantee excellent crowds and we look forward to ensuring this is best ever TV presentation for a worldwide audience.”

Pro-Active have been representing broadcast rights and co-ordinating the live production of the IRB Sevens World Series since 2004, during which time they have helped significantly raise the profile of the Sevens discipline on TV channels around the world.

“Pro-Active have played a significant role in the growth of Sevens around the World” said Beth Coalter, the IRB Sevens Manager for the HSBC Sevens World Series. “The attention to detail and personal touch given to assisting Host Broadcasters in maintaining IRB standards is something we are pleased will continue and I look forward to working with Pro-Active to develop and increase the Sevens World Series awareness”