PR lighting fixtures have been found lighting up many events around the world — but never before have they been involved in MMA (Mixed Martial Arts) ‘cage fighting’.

This is a full contact combat sport that allows the use of both striking and grappling techniques, both standing and on the ground, including boxing, wrestling, Brazilian jiu-jitsu, Muay Thai kickboxing, karate, judo and other styles

Over in Jordan, Amman-based R.B. Live Productions, the PR Lighting distributors, have been building ringside ground support trusses for Cage Warriors, an international association performing their art in more than five countries, with live television broadcast.

According to R.B. owner / operations manager, Emad Al Rabadi, “Generic and FX lighting are among the most important elements of the show, especially for the fighters’ entrance and the Red / Blue colour changing (depending on the fighter’s corner).” And PR Lighting’s fully-featured XL Beam 300 automated light has a major role to play, with its long throw beam and advanced colour mixing system.

Located in King Hussein Youth City, the New Boxing Arena is now the biggest boxing arena in Jordan; it was inaugurated recently with a six-hour-long Cage Warriors event, when around 2,200 turned up for the event, which was televised on international sports TV channels. 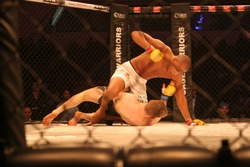 Eng. Al Rabadi admits, “I didn’t expect this degree of output from these fixtures. I was shocked by the brightness and lens quality — with the zoom function you can achieve different types of effect, with the great CMY colour saturation and very fast and smooth movement.

“For the lighting designer it was the first time he had experienced the XL Beam 300’s, and since they were the main lighting effect for the show, he was more than happy with the impact, as were the promoters.”

Sat.1 is back in the ring
MiniPlus is the first cho...cumentary with Litepanels
TV Skyline realized its first 3D Production