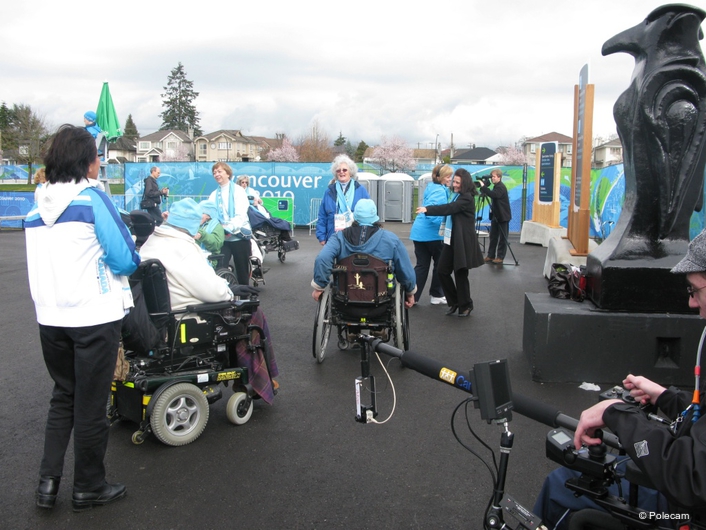 Steven Cayer on the job
Videographers with disabilities can now shoot professional-quality content using the industry-standard Polecam transportable video production jib thanks to an extraordinary new device developed at the University of Victoria in British Columbia. Using the CanAssist Polecam Power Chair, a physically-challenged cameraman can keep pace with people and objects in motion. It is an easy-to-operate system for recording activities such as documentaries and sporting events. 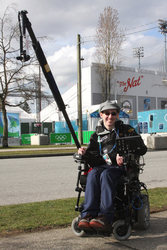 "We embarked on this project after being approached in 2009 by Vancouver film-maker Joe Moulins," explains Darcy Lane, Hardware Manager at CanAssist. "Our engineers have equipped a motorised wheelchair with an eight-foot Polecam boom arm and pan-tilt head. Steven Cayer, a 17-year-old undergraduate with cerebral palsy, became one of the first to use the CanAssist Polecam Power Chair when he produced a video report on the 2010 Winter Games in Vancouver. He has since continued this activity covering the Paralympics."

A Grade 12 student at Burnaby Mountain Secondary School, Steven Cayer controls the chair's movement with his right hand, manipulates a joystick that adjusts the camera's angle with his left, and changes the camera's height by blowing into a sip-and-puff device that raises and lowers the boom arm. A Toshiba 1080i HD camera attached to the Polecam rig can be elevated from ground level to a height of six feet. A high-definition LCD monitor attached to the Polecam Power Chair gives the operator a live view of the shoot. The camera control unit, custom electrical control box and a 1080i flash-ram recorder are mounted at the rear of the chair.

CanAssist is a technology development organisation 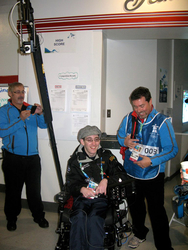 "Joe Moulins contacted us at an early stage in this project," adds Polecam founder and Managing Director Steffan Hewitt. "I thought it was a great idea and was very happy to donate one of carbon-fibre booms, a pan-tilt head, joystick-based control unit and HD monitor. I also rang a ramcorder manufacturer who were happy to donate one of their Compact Flash systems and Toshiba who kindly donated an HD camera. CanAssist did the hard work of integrating it all into a practical system. Polecam rigs have been attached to many forms of transport over water, ice, snow, dry land, to aircraft and even to the basket of a balloon but this is the first time we know of that one of our rigs has been coupled to a wheelchair. CanAssist's choice of a Polecam rig for this application is a great compliment to our efforts to promote high-efficiency easily-transportable mobile video production systems. Steven Cayer was a very welcome tenth addition to the team of Polecam operators providing content from the Vancouver Games. I hope other physically-challenged camera operators will consider following his example.

CanAssist is a technology development organisation within the University of Victoria, British Columbia Its core objective is to help bring about the increased inclusion and accessibility in society of those with special needs. A significant portion of the organisation's work involves projects and research that fall into one of the following areas: communication and control; mobility and movement; human-computer interaction; and training and employment. Many CanAssist activities support individuals and families in Greater Victoria and throughout southern Vancouver Island. CanAssist also routinely receives and responds to requests from across British Columbia, Canada, and even internationally. Its goal is to make many of its assistive technologies available nationally and worldwide.