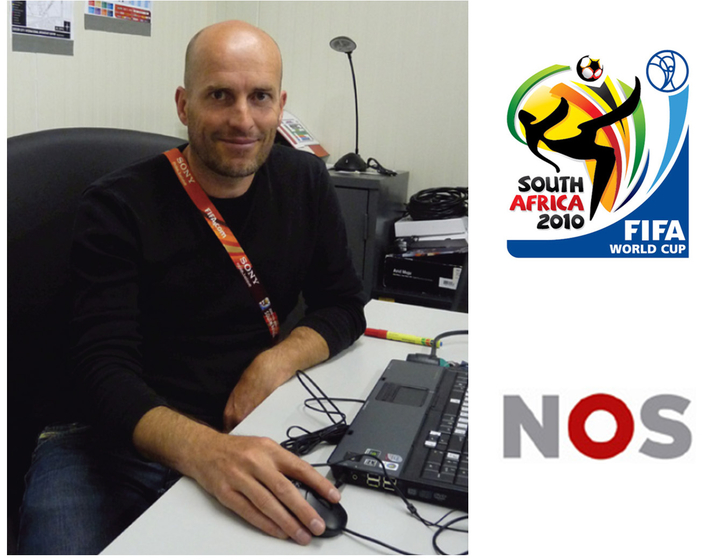 Richard De Wilt, directing the Dutch action for NOS
Not every MRL has brought a large team to South Africa: for Dutch broadcaster NOS there are under 30 staff on site. That would mean a fast and furious chase around the country for their four ENG crews if they were to get all the footage they needed – thankfully the FIFA Max Server is there to help.

“We have a crew with the Netherlands squad and one of the ENG teams is going to record pieces to reflect the African flavour of the event. There is also a crew that fol­lows the next opponent of the Dutch team,” explained Director Richard De Wilt. “However, we are going to transmit every game and each broadcast has a 20 minute studio programme pre-game so of course we will need features about key players. For this we are intending to use a lot of stuff from the FIFA Max Server.”

In total NOS will air all 64 matches live in HD, also trans­mitting all the Dutch games on their radio channel, as well as the big matches throughout the knockout stages. In total, on an average group stage day, there will be ten hours of FIFA World CupTM related programming with the evening wrap-up show broadcast live from South Af­rica at their studio in Melrose.

Like many broadcasters, the timing of the games has not always been helpful, but a back-up plan should ensure no viewer misses out. “Today’s Netherlands-Denmark game is on at lunch time at home, so many people will have to decide whether to skip work. However, we also have the internet rights so the whole game can be watched online and we hope that any dip in TV audience will be balanced by an increase in web hits during the game.” “There are 16 million people in the Netherlands and we expect half of those, if not more, will watch the Dutch games. We have at least three million watching a game like England-United States. It is by far the number one event for us, way bigger than the Olympics,” Richard concluded.