The winner will be the event that gathered the highest number of viewers over the period September 2010 to August 2011, in 3 territories at least.

Events in competition for the title of the most-watched sport event are: 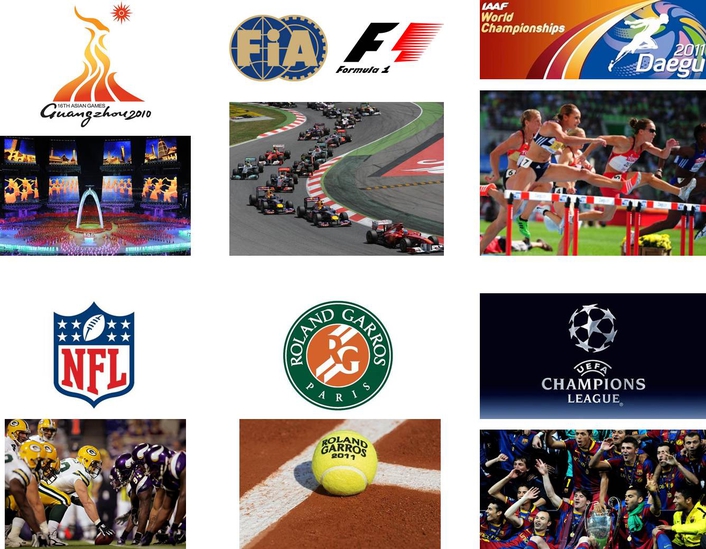 These nominees reflect the key role that is played by these competitions and above all by their participants as ambassadors for the values of sport. The nominees were pre-selected among the twenty best performing sports events in more than 60 territories, i.e. 2.7 billion potential viewers.

The winner will be announced during the Golden Podium Awards Ceremony, Tuesday11thOctober 2011 in Monaco.

All the TV ratings of the major sports events of the year are available on Eurodata TV Worldwide unique platform for all studied countries. Also, TV ratings of these events will be available in the 2011 edition of the “Yearly Sport Key Facts”, report to be released in October on the occasion of SPORTEL.

About Eurodata TV Worldwide
Created by Médiamétrie, Eurodata TV Worldwide distributes programming and audience information, based on its partnership with the national institutes operating people meter systems throughout the world. Today, Eurodata TV Worldwideʼs database contains more than 3000 channels in more than 80 countries and provides an exhaustive amount of daily program information including: content, production, international distribution and the audience levels for targeted programs, all data emanating directly from the relevant authorized institute based in each country around the world. These data provide a range of services which help in the decision-making process of international professionals within the audio-visual world like producers, distributors, broadcasters, copyright organisations, sponsors, etc.

About Médiamétrie
The industry leader in media research, Médiamétrie observes, measures and analyses audience behaviour and market trends. Created in 1985, Médiamétrie is expanding its activities in television, radio, the internet, film, mobile phones, and the cross-media sector in France and abroad. In 2010, Médiamétrie realized a turnover of 67.5 M€.

About SPORTEL
SPORTEL is the Sports Convention for Television and New Media. The next edition, SPORTELRio, will take place 12-14 March in Rio de Janeiro, at the Sofitel on Copacabana. After twenty-two years of dedicated service to the sports content industry, SPORTELMonaco is widely recognized as the largest, most successful business venue for sports executives. As well as the Market and exhibition, the Convention showcases various sporting demonstrations alongside professional conferences on issues faced in the sports content, television, new media and sporting industries. SPORTEL is part of the Monegasque Association, Monaco Mediax, which is under the Honorary Presidency of H.S.H. Prince Albert II of Monaco.