NewTek Triples The Action at The World Athletics Indoor Championships 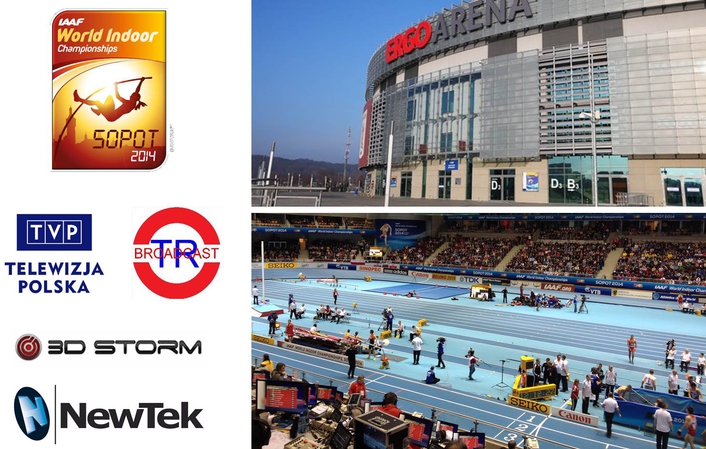 NewTek multi-camera sports production solutions answer broadcasters' needs at the World Athletics Indoor Championship 2014
The World Indoor Championships of the IAAF, the International Association of Athletics Federations, took place at the ERGO Arena in Sopot, Poland, from March 7th to 9th. It was the most important event for the Athletics Federations this year as there will be no Olympics and no outdoor world championship. 150 countries were represented for a three-day all sports event.

The TV part of the event was organized and televised by Televizia Polska (TVP). Four HD OB-VANs were on site for the production. TVP provided 38 cameras for the production of the multilateral coverage. In addition TVP supplied another 7 cameras for the production of the unilateral signals of TVP, BBC and Globo/SporTV. All the resources for BBC and part of the creative crew for Globo/SporTV was provided by TVP. Two OB-VANs  from Livecast (Germany) were working under the leadership of TVP. The 38 cameras in the Ergo Arena were covering the event from all possible angles. The 4th OB-VAN  from Sweden (HD Resources) was working exclusively for TV4. 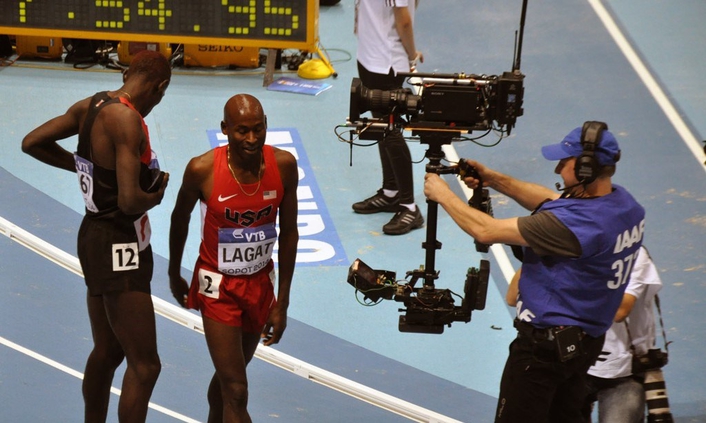 TRBroadcast, 3D Storm partner and NewTek dealer in Poland, installed the production setup for the production of the TV program within the Ergo Arena with a total of three NewTek systems. They operated the live production with a TriCaster as the backbone. They used a TriCaster with six camera inputs, fed by TVP as well as local organizers' cameras, to broadcast all the sporting event, but also behind the scenes images to four big LED screens hung above the main field. To complete TriCaster actions, as a full sports live production solution, a 3Play was added in the production workflow to operate slow-motion and instant replay.

3Play is a powerful slow-motion and instant replay system, used by many sports entities, mainly to operate slow motion, but also to extend TriCaster sources capacities. Lately many sports organizations have found a new application for 3Play, in the referee room. A 3Play 4800 was used by the referees to take the right decisions during the actions or during controversial events. With the 200 hours recording capacity in HD of the 3Play, the six cameras of the Polish television could send all the competitions images and highlights to be judged by the referees.

"The quality of the slow motion delivered by the 3Play impressed the jury of the IAAF" says Tomasz Kolaczyk, owner of TRBroadcast"The image is that sharp that it is a great help for the referees, they can have an eye on any details of the competition. On my side, I could operate NewTek solutions for sports live productions with my eyes shut. It is that reliable and efficient, that I never hesitate to recommend TriCaster and 3Play on such major international events. It always delivers!"

NewTek multi-camera sports production solutions are used in major international sports venues to broadcast competitions on television networks, to feed a web TV or a Dailymotion sports channel, or to display the big game on big displays or on second screens. Thanks to TriCaster and 3Play, sports broadcasters and producers today have the ability, to reach sports fans on every screen, to have them more engaged and to keep the sport's fever alive and live.

NewTek is transforming the way people create network-style television content and share it with the world. From sporting events, Web-based talk shows, live entertainment, classrooms, and corporate communications—to virtually any venue where people want to capture and publish live video, we give our customers the power to grow their audiences, brands and businesses, faster than ever before.
Clients include: The X Factor, New York Giants, NBA Development League, Fox News, BBC, NHL, Nickelodeon, CBS Radio, ESPN Radio, Fox Sports, MTV, TWiT.TV, USA TODAY, Department of Homeland Security (DHS), the National Aeronautics and Space Administration (NASA), and more than 80% of the U.S. Fortune 100.
NewTek is privately owned and based in San Antonio, Texas.