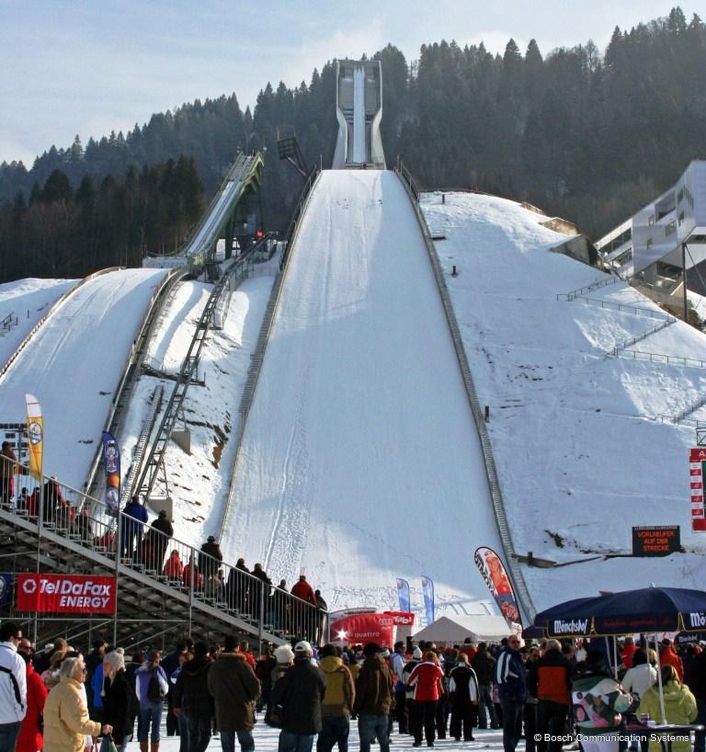 Start-up lane and the Garmisch ski jump hill table
The Four Hills Tournament is the ski-jumping equivalent of Wimbledon: the supreme highlight of the entire season, followed avidly by enthusiasts throughout the world. This latest (58th) edition of the tournament, ski-jumping's unofficial world championship, ran from the 29th December 2009 to the 6th January 2010 and comprised four competitions on four different slopes.

The sound reinforcement System was entrusted by TC Showtechnik 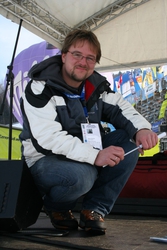 Traditionally, the Garmisch-Partenkirchen leg of the tournament (the other venues being Oberstdorf, Innsbruck and Bischofshofen) takes place on New Year's Day – and not only in leap years … – and in 2010, for the eleventh year in a row, the task of providing the sound reinforcement was entrusted to the Weilheim-based production company TC Showtechnik. The term "never change a winning team" was heeded here in the choice not only of the production company but also of equipment, with the team led by Martin Schulze and Stefan Rehthaler once again relying on Electro-Voice. The centerpiece of the solution proposed by TC Showtechnik for the event, which was watched live by 25,000 spectators and followed by millions more on TV sets throughout the world, was the XLD compact line array from EV.

"We had already used the XLD last year and the year before, and our experience with it each time was outstandingly positive," explains Schulze, "not only because the system delivers brilliant and powerful sound but also because it is extremely compact and absolutely weatherproof." The ability of equipment to perform in inclement conditions is of crucial importance to any outdoor production, but this year's crop of winter sports events are posing a particularly severe challenge. "We had temperature swings of around 30 degrees Celsius: plus 15 degrees and more during the daytime and minus 15 at night, with blizzards, freezing fog and rain," recalls Schulze. "A real endurance test for any system!"

The "ultra-compact and ultra-flexible rack" 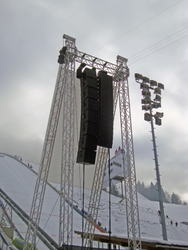 This year's competition also marked the debut of TC Showtechnik's newly configured amp rack. Only six rack units in height, this nonetheless boasts no fewer than sixteen power amplifier channels. The "ultra-compact and ultra-flexible rack", as Schulze calls it, is equipped with two EV CPS4.10 amps and one DYNACORD DAS 8805. "We tested the rack in Straubing with the XLD as well as a variety of PX series loudspeakers and were immediately convinced," says Schulze. "Our first impressions were spot on, too, as a recent Notwist production in London as well as this outdoor one both made clear. It's a rack that delivers first rate performance — not to mention incredible value for money!" 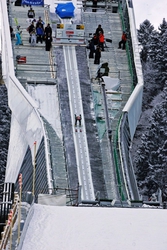 In addition to the size of the area to be covered and the extreme weather conditions, the Garmisch-Partenkirchen leg of the Four Hills Tournament poses a number of other tricky problems for the team responsible for the sound reinforcement. With the event being covered live by both TV and radio broadcast teams, and numerous interviews being conducted in the course of the event, there are certain areas of the venue into which the background music and announcements are not allowed to penetrate. Fortunately TC Showtechnik has at its disposal an indispensible tool when faced with this type of problem: currently the most powerful loudspeaker controller on the market, the Electro-Voice N8000-1500 makes it easy to provide compartmentalized coverage. "In the 'Mixgate' (where the interviews are conducted at Garmisch-Partenkirchen) and the area around the commentary booths, the level needs to be markedly lower than elsewhere," explains Schulze. "Six decibels lower, to be precise. The N8000-1500 allows us to intervene with forensic precision on a segment-by-segment basis, in this way meeting whatever conditions are imposed." To the complete satisfaction, evidently, of the organizers and representatives of the media. "We received nothing but positive feedback," states Schulze. "That's geed us up for the next set of major events – such as the World Cup Skiing in March." Where, once again, the venue will be Garmisch; where, once again, extreme climatic conditions can be expected to prevail; and where, once again, TC Showtechnik will be relying on equipment from Electro-Voice.