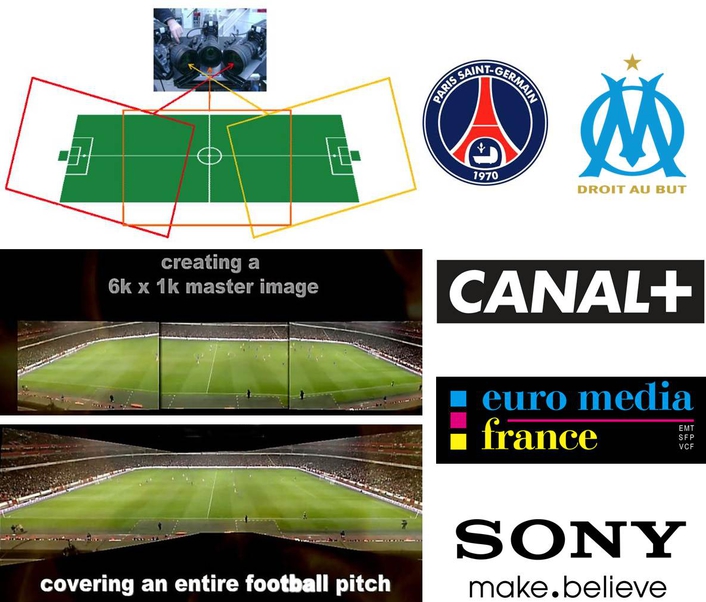 Three Sony HD cameras were assembled at the centre of the stadium, each covering one third of the pitch
The football match Paris Saint-Germain vs. Olympique de Marseille saw the world premiere of the online Stitch and DAV system (Data Augmented Video), inaugurated by Euro Media France and Sony Professional

After a series of successful tests carried out on the PSG vs. Nancy match (produced by Jean Jacques Amsellem), this weekend's derby (produced by Laurent Lachand), repeated online on Canal+, was the first match in France to benefit from this system - a simultaneous combination of new images and a tool to enhance raw contents. The tools enable the TV viewer to watch sport in a new, more immersive and informed way. It also allows players and trainers to gain a better understanding of the game's development.

Stitch
Three Sony HD cameras were assembled at the centre of the stadium, each covering one third of the pitch. The three Cameras, a video server and the MPE-200 processor box were used to create a panoramic image (6k X 1k). The operator tailors the frame to suit the story he wants to create.

Permanently recorded on the server, the panoramic image allows you to navigate through space and time so you do not miss any of the action. While scanning the panoramic image for the elements he wants, the operator can digitally edit out any previous action at any stage in the process.

Data Augmented Video
Sony has also developed 'Telestrator' software that lets you add editing enhancements to the panoramic image - online or on the first playback. Linked up to the player-tracking system SportVU, developed by STATS, the system lets you retrieve both tactical and editorial information, in addition to tracking players' positions in real-time. This formidable tool improves the TV viewer's experience by simultaneously broadcasting live images of the action on the pitch providing key information on the game.

The application was integrated into the production van of Euro Media France and can also be used for 3D stereo footage.

François-Charles Bideaux, Production Director of Canal+ Sports explains: “The combination of tracking the 22 players and dynamic graphics meant we could broadcast moving images, tactical notions and player formations as they had never been seen before. The result can be spectacular and available very quickly for insertion in the live broadcast. It is not a tool reserved for post-match editing. With the expertise of the Canal+ teams we were able to insert many sequences in the live action, similarly to a traditional replay. The other advantage that is very important for editing is the certitude that we can show the trajectory of any player at any moment of the match because the system frames and tracks all the players. So we can reframe a specific action by tracking the players concerned and following what we want to show editorially. Associated with the more traditional graphic tools, this is a great leap forward.”

Mark Grinyer, Head of Sports Development at Sony, commented: "All our technological innovations are the result of close cooperation with our customers, aiming to offer new solutions drawn from experiences and requirements on the ground. We develop solutions which undoubtedly offer TV viewers an enriched experience and allow television channels to set themselves apart by bringing new information to their audience."